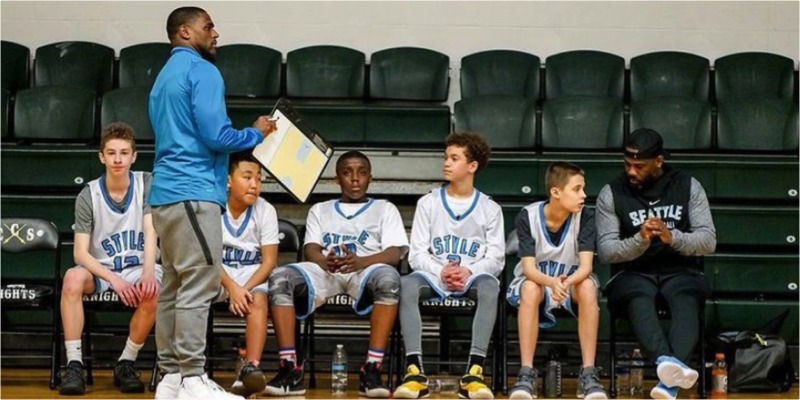 With the crazy year that is 2020 winding down, a few coaches on the BC Lions’ staff remain connected to their duty outside the club. Hopefully, just a few more months remain without Lions practice and game planning taking over day-to-day life. In the meantime, Ryan Phillips, Kelly Bates and Jason Tucker have been spending their time developing future athletes and leaders of tomorrow, along with many other volunteers committing to maintaining their communities. They have had a huge impact on those young kids.

Defensive backs coach Ryan Phillips has been coaching the Seattle Rotary boys’ basketball team of the Amateur Athletic Union. It’s a youth sports organization for young athletes across the U.S. to compete at a high level in various sports.

“The person that runs it is actually a family friend. I was asked to get back and be involved again. My sons play on the Rotary as well,” Phillips said.

As a kid, Phillips also played through the AAU system and he’s very closely intact with the Rotary basketball program. He has coached his eldest son Ryan Jr.’s team since the sixth grade. Those boys now have moved on to the high school level. Phillips’ original plan was to take a break from coaching AAU, but his youngest son Braylon is now playing on the Grade 3 team despite only being in Grade 2.

“The thing we like to do in our program is that we like our coaches to stay with their team as much as possible. The team doesn’t always stay the same because we have tryouts and they’re pretty intense. But for the most part, you kind of keep the nucleus of guys,” he said. 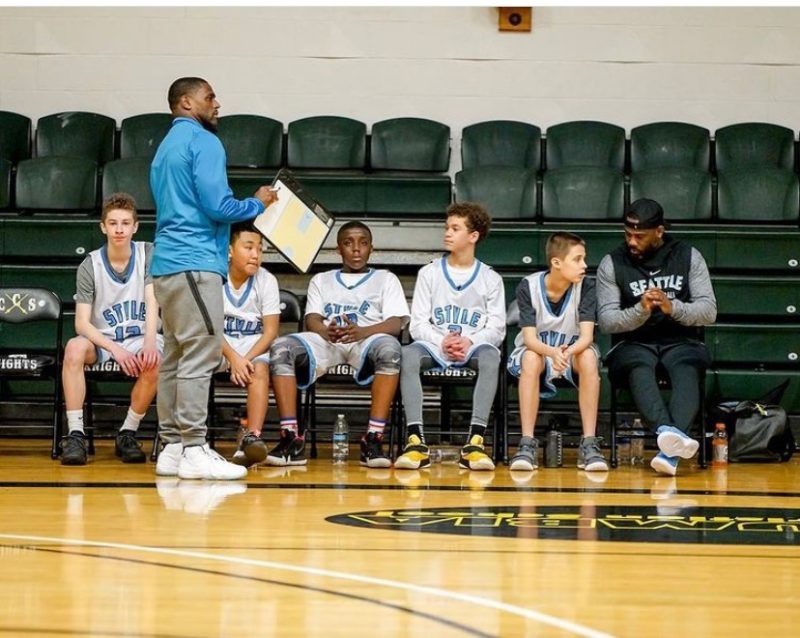 “I got the third-grade team now and this is a totally different process. You go from having 12, 13, 14-year-olds and to now having these seven and eight-year-olds. We still keep these guys competitive. The biggest thing for me now is teaching them to play under control, using their teammates, teaching them the nuances around the game to raise their IQ.”

The high-profile AAU team in Seattle has produced numerous basketball prospects that would go on to play in NCAA and the NBA. Phillips mentioned a couple of names such as Paolo Banchero, who has committed to Duke University, Nolan Hickman, a University of Kentucky commit and Kaden Perry, soon to enrolled at Gonzaga University next fall.

As much talent as they have on the Rotary system, Phillips’ job is to teach the fundamentals to these younger players. Normally, tryouts begin in October and the team starts playing games around right after Thanksgiving weekend in the U.S. and up to July.

“AAU is a commitment, and it’s just not for the kids. It’s a commitment for the parents. A normal schedule for us is basically going around for eight to nine months straight,” he added.

But the pandemic has disrupted the flow of the season. Most teams are only practicing at the moment. Only a few high school level teams had the chance to travel for games. Still, guidance from the coaches has been very positive.

Times when COVID-19 cases suddenly spike up, some parents would get uncomfortable to even allow their kids to go to practice. Yet, extracurricular activities are the leeway for young children to let loose. To fully grasp their attention during practice, Phillips finds the happy medium by letting his players engage in different activities and drills for the first half of the practice.  Once the kids get their heart pumping, that’s when he starts going through plays and game scenarios.

“Every kid is different, they learn differently. Some of these kids are visual learners and some kids need you to physically re-enact the phases. For most of the kids, they honestly need the interactive type of play because right now these kids are online schooling and they’re not getting enough activities. So when they come to practice now, they’re going to let that energy loose,” Phillips added.

“The younger kids are really suffering. Everything is based on their parents take them to practice, wanting them to be involved. Whereas the 17-year-old kids can drive themselves to go play. It’s definitely a difficult time but you got to find a way to make it work for these kids to be active and have some fun.” 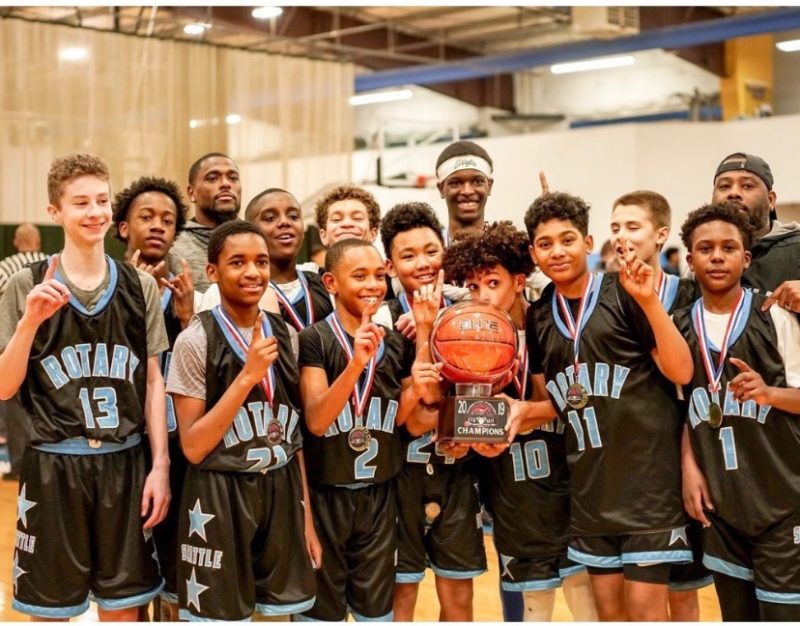 Offensive line coach Kelly Bates is used to guiding the careers of 300-plus pound behemoths. But recently, he has been making use of his background on the ice.

The former Muenster, Saskatchewan Senior League grinder has been taking the time that he normally wouldn’t have to coach his 10-year-old daughter Nyah’s hockey team in the Tri-Cities Female Ice Hockey Association.

This is the first time she is playing on an organized hockey team.

“Obviously at this time of year, coaching or helping out with their sports isn’t normally an option for me so it was sort of one of those instances where I wanted to make sure I took advantage of a time that I don’t normally have and they needed someone to help out,” Bates said.

Although it is a challenging year for youth sports to operate compare to the past, Bates said he was impressed and amazed with all the people that keep the association running. The staff had to consistently stay on top of the latest COVID-19 protocols to ensure players can safely be on the ice.

“They put in countless hours in a regular year and then a year like this, where they’re constantly liaising with the Ministry of Health, constantly updating health protocols and these are intricate documents that are 30 plus pages long that have health protocols and seem to be changing every week and going out every week. So, to me, the organization and the coordination at each level is just amazing and I feel very fortunate to be a part of it.” 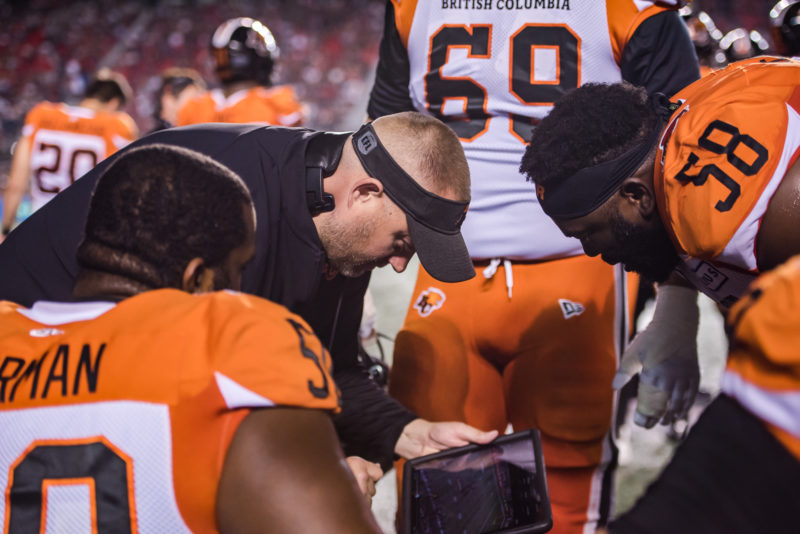 Although the girls only played one game this year so far, they’re currently back in phase two of the return to play safety plan, where they can only practice two to three times a week for an hour.

On top of the weekly practices, the association held a fundraiser for the Tri-Cities Food Bank this past weekend on Dec. 12, at a 7 a.m. practice.

“I’m very spoiled to be a part of it, and just feel very fortunate to get to spend some time with my daughter and at the same time see all these other amazing people and you know their love of sport and in this case, love of hockey, rub off on everyone,” the o-line coach added.

Usually, the season starts in October and goes until the middle of March where it normally ends with a tournament. But all the games are postponed until further notice. However, Bates said the girls have a great attitude and they continue to show up to practice week in and week out.

Meanwhile, down in Texas wide receivers coach Jason Tucker told fans during our BC Lions Town Hall from Nov. 18, that he has been partaking in all four of his daughters’ basketball games while looking forward to a safe return to Canada in a few months time.

In many ways, 2020 was a bad year for a lot of people. But in the case of these Lions leaders, they will one day look back on it and cherish the extra time with family and helping young kids achieve their own professional goals.