Move The Chains: Conversations About Diversity And Inclusion In Pro Football

Move The Chains: Conversations About Diversity And Inclusion In Pro Football

The BC Lions Football Club is proud to launch Move The Chains, a new video series dedicated to promoting the importance of diversity and inclusion in the world of professional football.

Hosted by four-time CFL All-Star, two-time Grey Cup champion and current Lions defensive backs coach Ryan Phillips, this new series on bclions.com will feature a wide range of guests sharing their personal experiences, kicking off with a conversation on discrimination and race relations both on and off the football field.

“This will be enlightening, to say the least,” said Phillips from his home in Seattle.

“You really couldn’t ask for a better time to come together and share our experiences, perspectives and hope. This series presents us both a platform and avenue for real and raw truth.”

As is evident in current world events as well as the widespread adoption of the Black Lives Matter movement in 2020, racism is not an isolated issue. It exists in many forms and it needs to be discussed in order to improve. As a professional sports franchise that prides itself on making a difference in its community, the BC Lions have a responsibility and a platform with which to take action in an effort to create change in positive ways.

Move The Chains also opens the door to other discussions including gender diversity in sports organizations, the LGBTQ community in athletics and our organization’s continued involvement in a government program focused on ending gender-based violence. 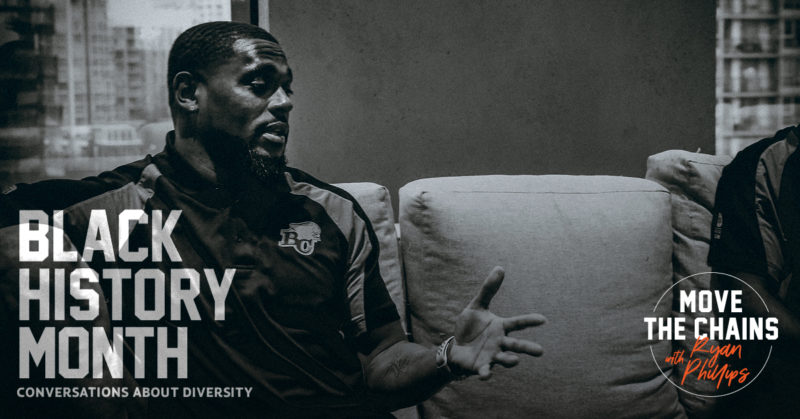 The project kicks off in early February as the football club pays tribute to Black History Month. Episodes throughout the month will feature Phillips speaking with personalities from across the league including: Mark Washington, Barron Miles, Khari Jones, Orlondo Steinauer, Jason Shivers and more.