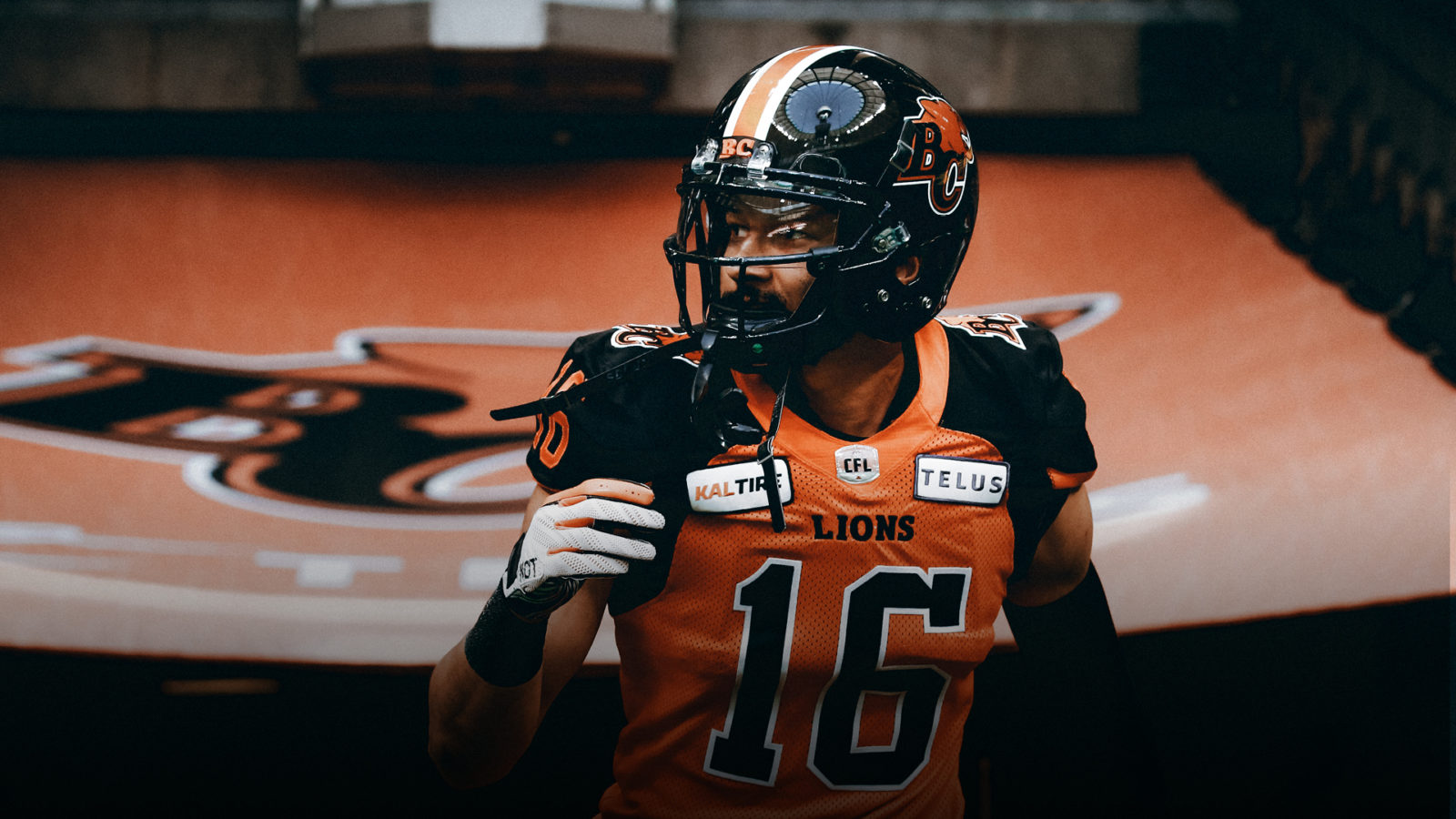 Bryan Burnham, a household name in the CFL had many diehard Lions fans concerned about his future with the team over the past few weeks. That all changed this Monday morning when he chose to stay in B.C. for the 2021 season. In 2014, Burnham was still under the radar. The former Tulsa Hurricane showed up to Kamloops with a chip on his shoulder. He worked hard to stay on the practice squad and waited 12 weeks to finally make a play. Six years later, he was acknowledged by his peers across the league as one of the best wideouts in the game. Here is a timeline of some of Burnham’s best moments so far in orange.

Burnham’s first CFL season only saw him promoted to the active roster on two occasions. But he showed some that upside in his debut against the Toronto Argonauts on September 19th of 2014. He was targeted nine times and hauled in five catches, including a 13-yard touchdown pass from Kevin Glenn midway through the fourth quarter. Although the touchdown came in a losing effort, it was the first of many for number 16.

His big breakout season came along in 2016, where he recorded his first 1,000 plus-yard seasons in the CFL. His true coming-out party was in. Thanksgiving weekend visit to Winnipeg.

Burnham had nine catches for 208 yards on the day in a closely contested battle. He was a problem for the opposing defenders, who were able to split double coverage and dragged his feet along the sidelines to move the chains. Although Burnham didn’t reach the end zone, his big-play ability helped set up touchdown runs for Travis Lulay and Anthony Allen plus a field goal from Richie Leone as the Lions nearly completed a remarkable comeback. Burnham finished the 2016 season with 1,392 receiving yards.

An emerging star was on the rise when Burnham consistently put on a show every single week. He can win the one-on-one jump ball, reach for a back shoulder grab and one-handed catch. His first touchdown catches of the 2017 campaign started with a specular catch against Hamilton in Week 4. It was also a memorable night for many because Lulay threw for a career-best 436 yards, a CFL single-game record for a quarterback coming off the bench, and three touchdown strikes. Fellow receiver Nick Moore also piled up a career-high of 220 receiving yards.

Burnham only caught the ball twice that night but his one-handed catch at the end zone stunned the Hamilton crowd. The Lions would use that momentum shift to secure the road win (41-26). After Jeremiah Johnson took the ball to Hamilton’s six-yard-line, Burnham was double-teamed by two Tiger-Cats defenders in the next play. Then Lulay squeezed the pass into a tight window where Burnham almost got tripped up while running his route and being grabbed at the same time. He managed to scoop up the pass with his left arm. The Lions extended their lead to 31-16 near the end of the 3rd quarter.

Many fans might still remember this crazy comeback win from 2018. It was Burnham once again who dug the team out of a major hole.

In a rollercoaster back-and-forth game between the Lions and Tiger-Cats at BC Place, Burnham stepped up in the right moment with no time left on the clock. Jonathan Jennings looked at Burnham’s way as soon as the ball snapped, he started down at three defensive backs and zipped the ball just out of the reach of DB Josh Johnson. But Burnham was the one who came down with the ball at the end zone. After the score, the Lions were still down by two and went for a two- conversion.

Jennings lobbed another pass towards the sideline where Burnham secured the football while tapping his toe in bounds and ultimately running full tilt into the team photographer, Paul Yates. The collision caused some confusion on the field that required an official review. After examining the play, the referees overturned the decision to a completed pass. Since the replay indicated Burnham’s right foot remained in bounds, the successful two-point conversion sent the game to overtime. The Lions then prevailed 32-29 on Ty Long’s winning field goal to cap off a crazy night in front of the Lions faithful.

RELATED: The Story Behind The Shot 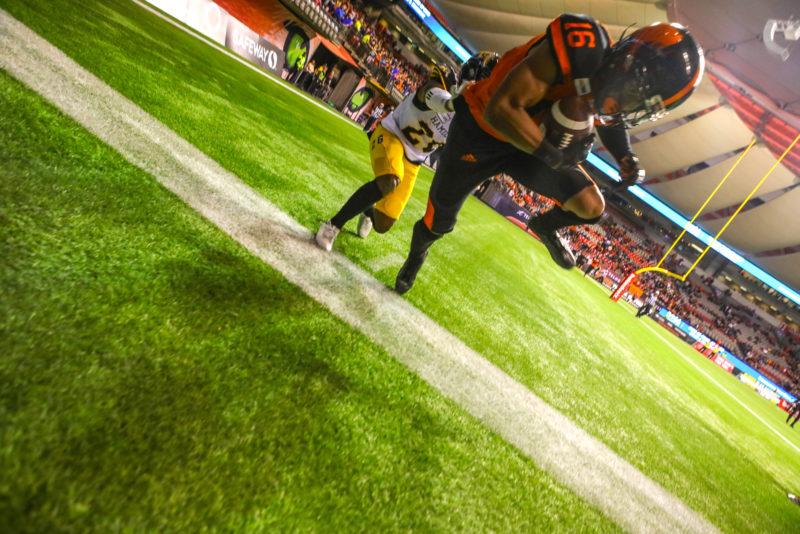 Burnham is the only Lion besides Geroy Simon to collect four consecutive 1,000-plus receiving yards during his career. On September 21st, 2019, Burnham reached that milestone against the Ottawa Redblacks with nine receptions for 135 yards and a score. It was during the Lions’ three-game winning streak late in the 2019 season.

Despite not making the playoffs, 2019 was a career year for Burnham. Through 17 appearances, he hauled in 100 receptions, 1492 receiving yards and 11 touchdowns ­— exceeding previous years in almost every category. 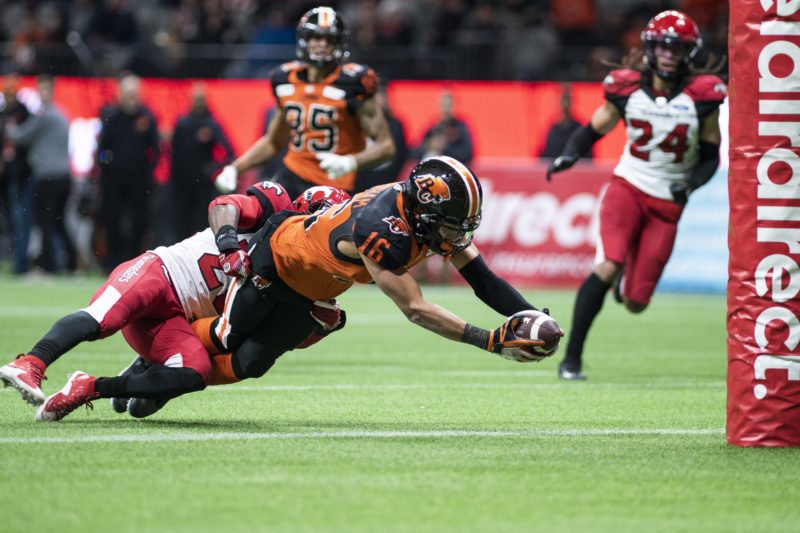 A week before Burnham secured that fourth 1,000-yard receiving season, he also surpassed Matt Clark for tenth spot on the club’s all-time list in receiving yards. He is currently at a total of 5,651 receiving yards and has some more climbing to do on that list. Burnham only needs another 1,040 yards in 2021 to pass two-time CFL All-Star Mervyn Fernandez’s total of 6,690 yards. Judging the trend based on previous seasons, Burnham would be on pace to move into fourth in all-time club receiving yards behind just behind Geroy Simon, Jim Young and Emmanuel Arceneaux.

The milestones and recognitions are appealing but they weren’t the main reasons why Burnham decided to come back to B.C. As he said on Monday’s interview with Matt Baker, “I’m at the point of my career where all that matters now is winning. I do believe in what Rick [Campbell] and Neil [McEvoy] have put together here and I got a lot of faith in Mike [Reilly]. We got the man some protection. We’re going to put some weapons around him and we’re going to be a great football team.”

What Is Next On The Timeline?

Surely these are all great moments to look back on. But what will the Burnham timeline bring in 2021 and beyond? He just said it right there. It’s all about getting a chance to sip from that Grey Cup!