All-World Solly Thrived Off Getting Knocked Down 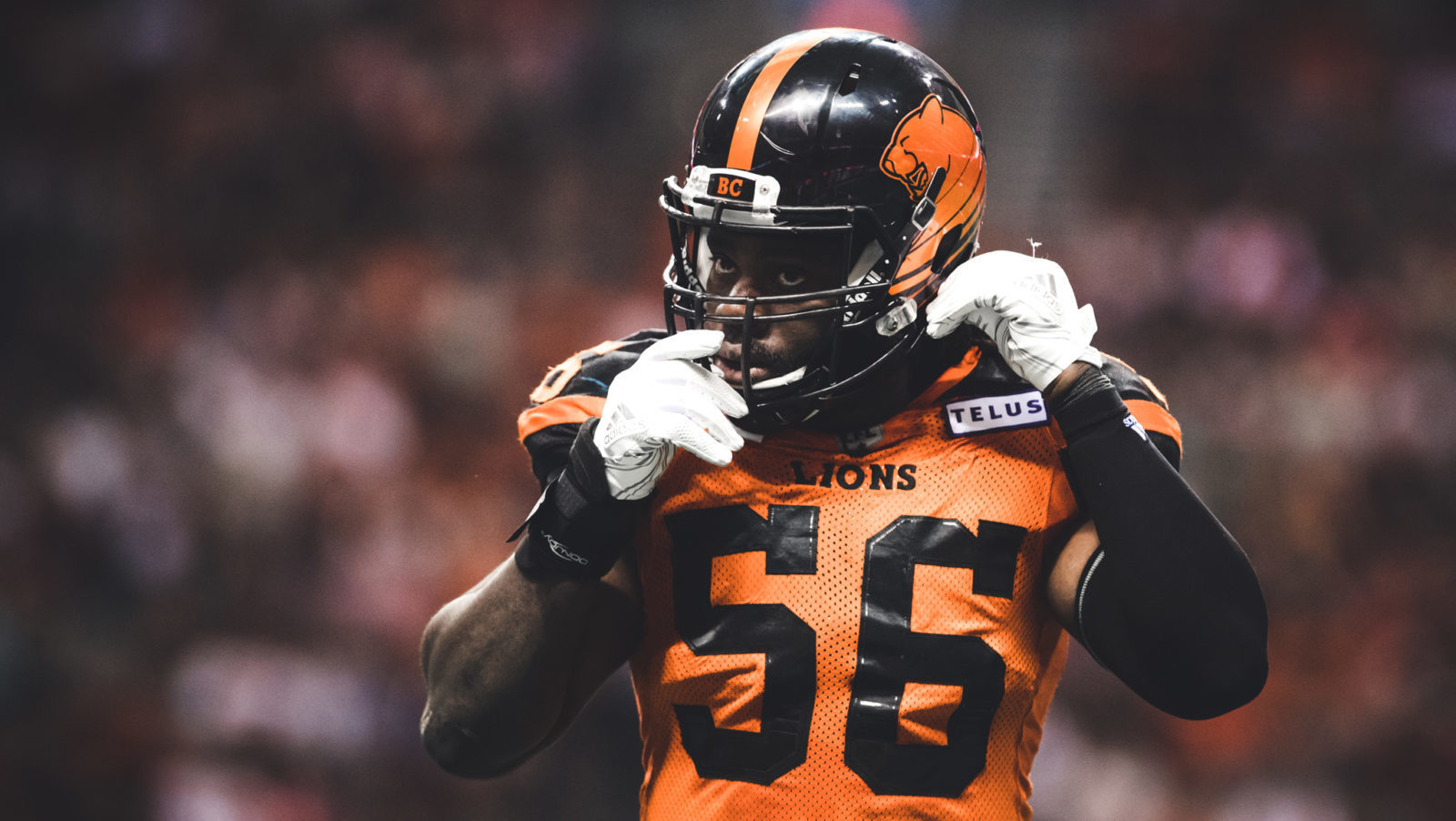 All-World Solly Thrived Off Getting Knocked Down

It was the noted one-hit wonders known as Chumbawamba who famously said, ‘I get knocked down, but I get up again.’ Solomon Elimimian knows a thing or two about that. Hall of Fame players of his caliber are typically only remembered for their glorious moments. In the case of Solly, there was hoisting that Grey Cup in 2011. There was 2014 when he was the first-ever on defence to win CFL Most Outstanding Player.

Who can forget winning his second league Outstanding Defensive nod one year after being carted off Hamilton’s Tim Hortons Field with a ruptured Achilles tendon? All of that will be in his bio when he one day gets inducted to the Canadian Football Hall of Fame: ironically now on-site in that same Hamilton venue.

But many of these players had to survive that ‘last shot. For Solly, it was when he showed up to a Los Angeles free agent camp the Lions were staging in the spring of 2010.

“I signed with the Buffalo Bills out of college and then was cut in camp, “remembered Elimimian from his home in Surrey, one day after announcing his retirement as a player.

“I ended up sitting out that whole year, thinking I would get another NFL call. This was before the days of YouTube and all that, so I didn’t really know much about the CFL. Roy Shivers tracked me down, then I worked out for Wally Buono in Los Angeles. He played linebacker so he knew what he was talking about.”

Slight problem. At least on that particular day, Solly didn’t exactly show them what he had done on tape. Buono and Neil McEvoy offered him a lifeline. Come to Las Vegas for our next workout and see what else you can show us. The way McEvoy recalls it, Elimimian did what most young prospects wouldn’t. 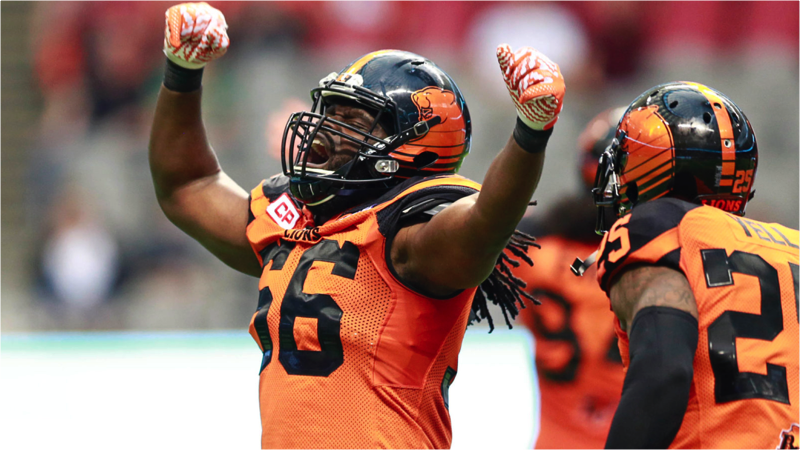 “Wally didn’t like the way he ran,” said McEvoy.

“Usually, that makes guys very discouraged. They say ‘no, it’s done. Wally has told me I’m not playing.’ But we went to Vegas and he actually came out. He did run for us again and his time was improved. History has shown he worked hard to get on our team and when we went to training camp that year, he just proved that he was meant to be here and all the service he had to the BC Lions was really good. His career was just amazing.”

Even after his redemption in Sin City, the battle was just beginning for the ferocious linebacker who had dominated at the University of Hawaii.

“Of course, then I get to camp and I’m last on the depth chart. That was another chip on my shoulder,” recalled Elimimian on his arrival in Kamloops.

“I told Wally and the staff that they were going to make it impossible to cut me. I had some really good coaches in Mark Washington and Mike Benevides that did a great job teaching me the fundamentals of Canadian football. It was my last opportunity. All I wanted to do was make my family proud. That’s why I played so angry. I had that chip on my shoulder and was always told I wasn’t going to be much.”

To one of the best: congratulations on an amazing career and on your retirement @SolomonE56.

Thank you for everything you gave to the #BCLions and the @CFL. Excited to see what’s next 👊🏾#AlwaysALion pic.twitter.com/nudvi6CiGo

Solly and the Football Family

Nine years with the Lions organization brought several memories. We have outlined some of those already. Once Solly accepted his award for CFL Most Outstanding Rookie to cap off an amazing 2010 campaign, you knew the Lions had a player. Yet despite becoming the franchise’s all-time leader in tackles, sipping the Grey Cup champagne in year two and then breaking his own CFL record for most tackles in a single season (144 in 2017) and twice setting the mark for most tackles in a game (14 in a 2016 win at Toronto, then 17 in a win at Montreal the next year), Solly will forever cherish the relationships he established along the way.

“I think of the teammates and friendships. Adam Bighill of course, all those years we were side by side. Phillips, Banks, Dante Marsh, Brent Johnson. Geroy, Jovan, Lulay and all those other great QBs we had,” said the four-time CFL All-Star.

“These are hall of fame players. I can go on and on. I was coached by one of the best ever in Wally Buono. What I am going to miss most is that camaraderie and everybody working together to do their job to help the team be successful.”

Football is the ultimate team sport. And given how the future Hall of Famer had to scratch and claw his way to becoming one of the best Lion defenders of all-time, it’s no surprise Solly will look back on all of his teammates as his main motivators to success. 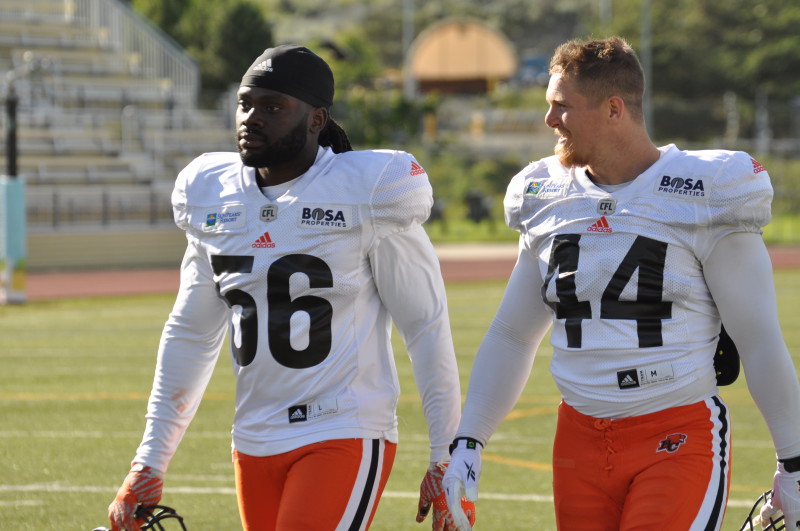 The ‘Team 100’ duo of Solomon Elimimian and Adam Bighill taking a rare moment off at 2016 training camp in Kamloops.

It speaks volumes that Elimimian will call Surrey his home in ‘retirement.’ We use the term loosely because he will serve the remaining one year of his contract as president of the CFLPA with talks and plans heating up in terms of how to safely get back on the field in 2021. He’s also completing his qualifications in securities with plans of going into the financial management business.

But from his birth country of Nigeria to growing up in Southern California to the University of Hawaii to another attempt at cracking the NFL with both Minnesota and Cleveland in 2012- there’s that habit of getting back off the mat again-, the man who wore number 56 proudly in orange and black will never forget who gave him that pro football lifeline.

“I’m always proud of how I adopted this community and those relationships I’ve established,” said Elimimian.

“It (working for a living) will be different, but it’s the same principles I used in football. You’re always goal-driven, learning, working hard and taking everything you do seriously. I’ve made some contacts in Vancouver that have shown me the ropes for this transition.”

He admits it won’t really sink in for him until camps are underway and he’s not going through the meetings, stretches and banging pads for the first time. Those memories will last a lifetime.

“It’s funny, that clip of me yelling at that Stampeders player on TSN before an interview (above) went viral yesterday, “he chuckled.

“The trash talk was always one of my favourite things. I think about the 2011 Grey Cup. Starting 1-6, trading for Arland Bruce and Tad (Kornegay) and then all of a sudden, we’re balling. Everybody believed in each other. That was a special time in my career.”

Chumbawamba would be proud indeed.