His 2,361 career rushing yards are 12th all-time at the University of Illinois. On one occasion, he was handed the Red Grange Award given to the school’s top offensive player. There were also multiple All-Big Ten honours during his time in Champagne. Despite all of that, Reggie Corbin knows his first venture into a professional training camp will result in nothing being handed to him.

“Every day, you’ve got to go out there and prove your worth. You’ve got to keep going,” said the newly-signed Lions running back on a ZOOM press conference set up for Illinois scribes on Thursday.

“I’m not looking for anything. I haven’t really been told anything, of course, other than I’ll get a chance to play. I just want that chance, that opportunity to go out there and prove who I am, show what I can do and let the chips fall where they may. That offence is special. From quarterback to receiver, I see all the extensions on the line coming back, it’s a beautiful site to see everything come together. I’m just excited to get out there, play with those guys, gel and hopefully do some special things.”

It sometimes can be a harsh reality check for those that climbed up the record books at their respective schools. Talk to him for just a couple of minutes and you’ll quickly learn Corbin knows he needs to do his part to crack the roster. One man who always made sure he had his head on straight was his head coach at Illinois, Lovie Smith.

“Coach Smith did a heck of a job preparing us for pro football. We went to the East-West Shrine Game pro practice, that’s exactly how everything was run,” he explained.

Me and my teammates, that was all that we were used to. Guys had to adjust and try to figure out where to go and everything. For us, that was usually how we practiced.  That was amazing. We were in great shape for it, we knew how to go about every single thing. We knew how to check the depth chart before we went out to practice. Those are the little things that can set you apart and help you be where you should be when you play pro football.”

Any way you look at it, the competition at many of these skill positions should be fascinating. Last week brought the addition of a more experienced tailback in Shaq Cooper. He could be counted on to carry a lot of the backfield load. Depending on how the ratio plays out, Wayne Moore and Jamel Lyles each provide head coach Rick Campbell with a solid Canadian option. 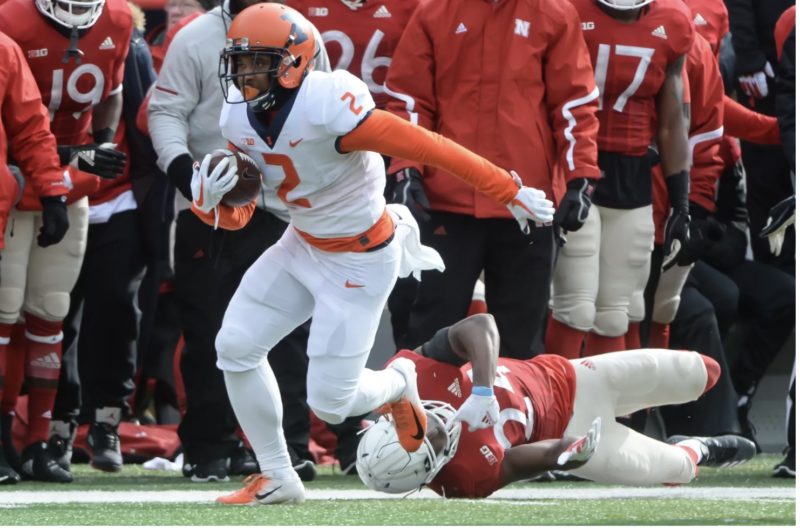 Prior to Illinois, Corbin grew up in Fort Washington, Maryland- a community that borders Washington DC- and now makes his offseason home in the warm confines of South Florida. So that being said, the west coast climate actually suits him better. He went out of his way to note he loves the chance to play indoors or in warm weather with the BC Place roof open.

“That orange runs through my blood a lot seeing being at Illinois. Since finding out I would be signing in BC I’ve been watching a lot of games on YouTube. I’m excited about all the different rules of the CFL. I’m just grateful for the opportunity.”

Just how tailor-made does he think he is to the CFL game? Corbin admits he’s still learning the basics, but some of these adjustments will be very exciting.

“Man, I didn’t realize it was three downs for a while,” admitted Corbin.

“Obviously, it won’t be as much running (laughs). Just the fact that it’s wider, it will take me a day or two to adjust but I think it will be perfect. Out here when I train now, I’ve been trying to use more of the field and do the things of that nature. That’s just rugby for me. The rugby field is wider. It’s time for me to get accustomed to it again and keep going. I think it will give me more space to run and what more could a running back want when you don’t want to get hit?”

And oh yeah, one less down certainly has him intrigued to play more of a role catching passes out of the backfield.

We for sure know the orange suits him.