The BC Lions added five more promising prospects this past week during the CFL Draft. Within the first two selections, the club chose two high-profile Canadian-born athletes out of NC State and Iowa. Both Daniel Joseph and Alaric Jackson dreamed to play in the NBA as a kid, but football chose them in the end. They picked up the game in their junior year of high school and never looked back.

Then the Lions used the rest of thire draft picks to select three accomplished athletes from three different Canadian universities. It started with UBC’s defensive captain, Ben Hladik, in the third round, Laurier standout defensive lineman, Alfred Green, who went in the fifth round, and Tyler Packer was picked up in the sixth round. The big o-lineman helped the Calgary Dinos captured the 55th Vanier Cup in 2019. Some three-down purists may already know who these young prospects are. For others, we take a deeper dive into the 2021 Lions draft prospects.

The Toronto native grew up surrounded by talented football players. Joseph’s older brother, Faith Ekakite, was the first overall pick by the Winnipeg Blue Bombers in 2017. His cousin, Ese Mrabure-Ajufo was a former Lion first-round pick as well. But football didn’t come along until Joseph’s junior year of high school because his first love was basketball.

He was a four-year varsity basketball player at Lake Forest Academy in Illinois, then transitioned to the gridiron as a tight end. In his junior year, Joseph and his athletic basketball background hauled in 26 passes for 498 yards while reaching the end zone eight times.

In his senior year, Joseph became a two-way player on the defensive line and continued his success at tight end. His 72 tackles, two sacks, 25 tackles for loss, two interceptions and ten receiving touchdowns caught the attention of NC State.

Wolfpack head coach Dave Doeren originally recruited Joseph in 2016. On top of the stats Joseph put up after only playing two years of football, he was a four-star prospect ranked by ESPN and was considered as the No. 1 player in Illinois.

In the end, Joseph chose Penn State, where he put up 29 total tackles and 2.5 sacks in three seasons. He would eventually return to Doeren’s team as a graduate student. Joseph showed that NC State was a better fit for him as he would easily surpass his Penn State stats in just one season playing in Raleigh, North Carolina.

Joseph led the Wolfpack with 6.5 sacks in the 2020 season — eighth in ACC. He also tallied 37 total tackles and ten tackles for loss in 11 games. Although Joseph will likely return to school for another year, he sure would add depth to the BC Lions defensive front. 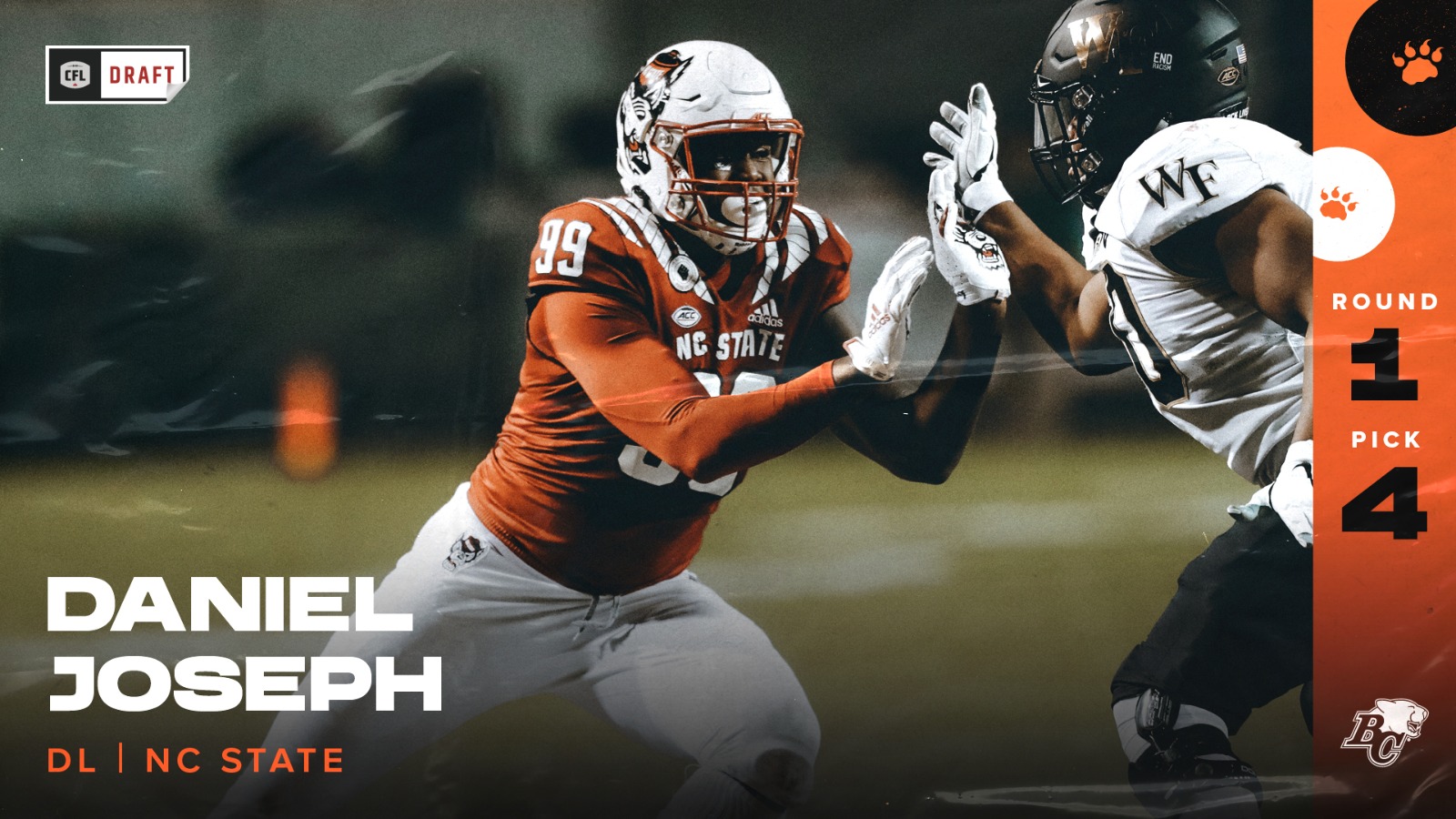 Jackson is another Canadian brewed product that had success in the NCAA. Born in Windsor, Ontario, raised in Detroit, Michigan, his path to football was a lot like Joseph, who also was a hooper growing up and didn’t start playing football until junior year of high school. Leading up to the 2021 CFL Draft, Jackson said in several interviews that he originally wanted to play in the NBA, but soon later realized that his 6’7’’ body would be better off as a football player at the professional level. The multi-sport athlete in high school was also a two-way player for his prep team.

His gifted athletic abilities would help his team to reach the state playoffs in his junior year. While playing on the offensive and defensive line, Jackson was a team captain and set the school record for sacks in his senior year. Jackson’s standout season would attract many schools in the Big Ten conference such as Wisconsin and Michigan. But Jackson picked the University of Iowa, a program that takes pride in its offensive line, some notable alumni include Tristan Wirfs, Brandon Scherff and Marshal Yanda.

After enrolling at Iowa in 2016, Jackson was redshirted in his first year. The sports medicine major would return in 2017 to produce on the field. Jackson got the opportunity to start at left tackle, played against other Big Ten competition and earned himself an academic All-Big Ten and first-team freshman All-America by Football Writers Association of America (FWAA), plus Big Ten Conference All-Freshman team by BTN.com.

Jackson started 42 career games at Iowa. He was a regular All-American, all-conference player from 2017 to 2020, starting every game he played at left tackle. Just after the NFL draft on May 1st, the Los Angeles Rams signed Jackson as an undrafted free agent. Although the BC Lions have secured his spot in the CFL, Jackson will be competing to make the 53-man roster for the Rams. To cap off a very exciting week for the big lineman, he was also nominated as a finalist for the Jon Cornish Trophy given annually to the best Canadian playing in the NCAA. As far as top-notch offensive line prospects go, Jackson is the full package. Many Lions fans and observers will no doubt pay attention to Los Angeles Rams OTAs and training camp. 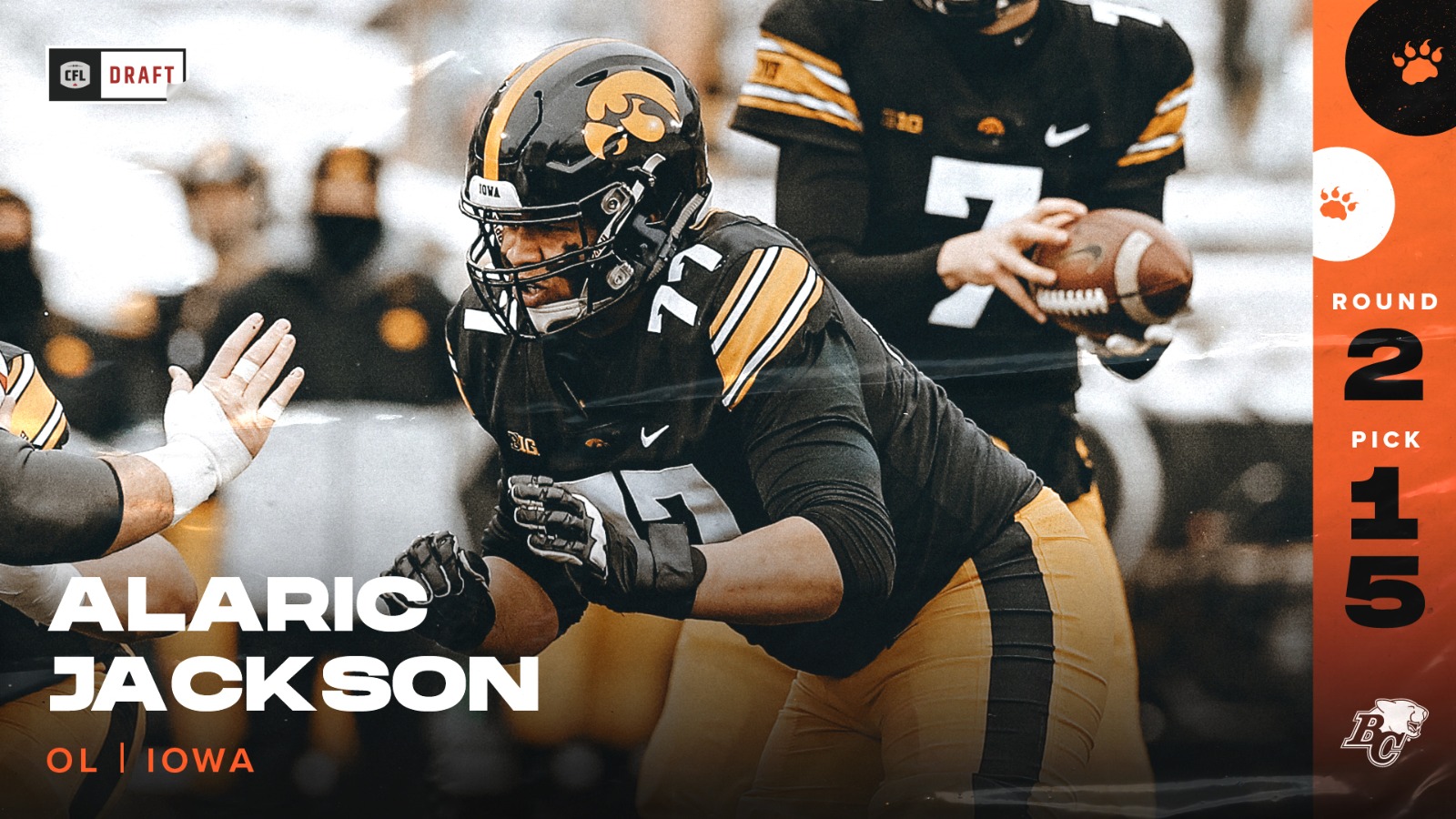 Local prospects always add more excitement on draft night. The homegrown kid will be in orange and black very soon. Hladik, who was born and raised in Vernon, B.C., was once a Vernon Secondary School’s hero when he led the Panthers to their first B.C. AA Subway Bowl in 2016. Despite losing to the top-ranked Seaquam Seahawks, he was the first Vernon player to earned provincial MVP in the same year. Hladik committed to UBC a year later and immediately made an impact for the Thunderbirds.

He was third on the team for tackles in 2017, just behind Dagogo (William) Maxwell and Elliot Graham, who was selected by Calgary seven picks after Hladik on Tuesday evening. UBC finished the regular season 6-2 in 2017, then took on the Calgary Dinos for the Hardy Trophy for the third straight year. Hladik and the Thunderbirds would lose in a thriller by falling one point short against the Dinos (44-43).

In 2018, Hladik elevated to another level when he was averaging 6.2 tackles per game in the regular season, ranked second in Canada West and also led the team in tackles. He would finish his sophomore year with 73 total tackles, 14.5 tackles for loss, 3.5 sacks and three forced fumbles. Although his team wouldn’t battle for another Hardy Trophy, Hladik was a tackling machine for the Thunderbirds.

He was recognized as a Canada West All-Star twice in 2018 and 2019, plus U SPORTS first-team All-Canadian in 2018 and second-team All-Canadian in 2019. Last December, Hladik was invited to the College Gridiron Showcase (CGS) in Fort Worth, Texas. Then his display at the 2021 virtual combine showed more promises before the draft. The 6’4’’ linebacker recorded 29 reps for the bench, ran 4.66 seconds on 40-yard dash, 10’7’’ broad jump, 6.66 seconds on 3-cone and 4.16 seconds during the shuttle drill. 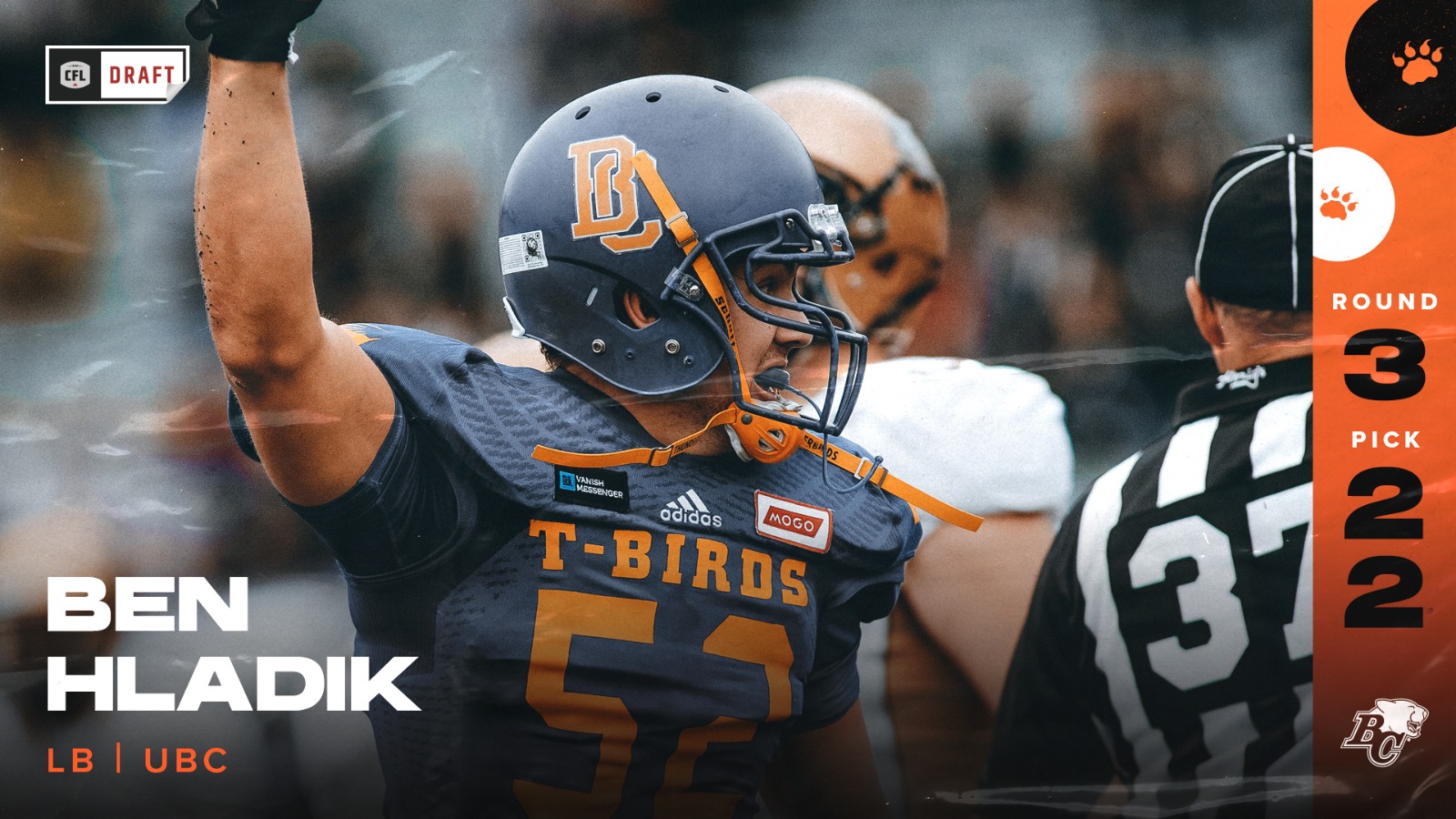 Green is yet another from the defensive line factory of Laurier selected in the CFL Draft over the years. Last year, Green’s fellow teammate Samuel Acheampong went to the Argos in the second round. And Kwaku Boateng was nominated as the Most Outstanding Defensive Player for Edmonton in 2019. Riders’ linebacker Nakas Onyeka was a standout player himself at Laurier as well.

Green was a part of the 2016 Yates Cup-winning team when Laurier came back from a 21-point deficit to beat the Western Mustangs. Green’s new Lion and former Laurier teammate, Isaiah Guzylak-Messam also recalls the 109th Yates Cup as one of his favourite moments playing for the Golden Hawks.

Now the two will be reunited again to create something special. Green’s dominance didn’t emerge until 2018 when he made 17 total tackles in seven games. His success on the defensive line continued in 2019 when he registered 22 total tackles on top of his three sacks, three forced fumbles and one fumble recovery.

Like many U SPORTS athletes, Green couldn’t finish his career at Laurier in style. He spent the past year at home. But he used that time to develop his interest in graphic design and has been creating social media graphics for Golden Hawks football team on Instagram.

On top of that, Green has also been running his own clothing brand called SEEKER. By Lefdra — keeping him busy while training for camp. 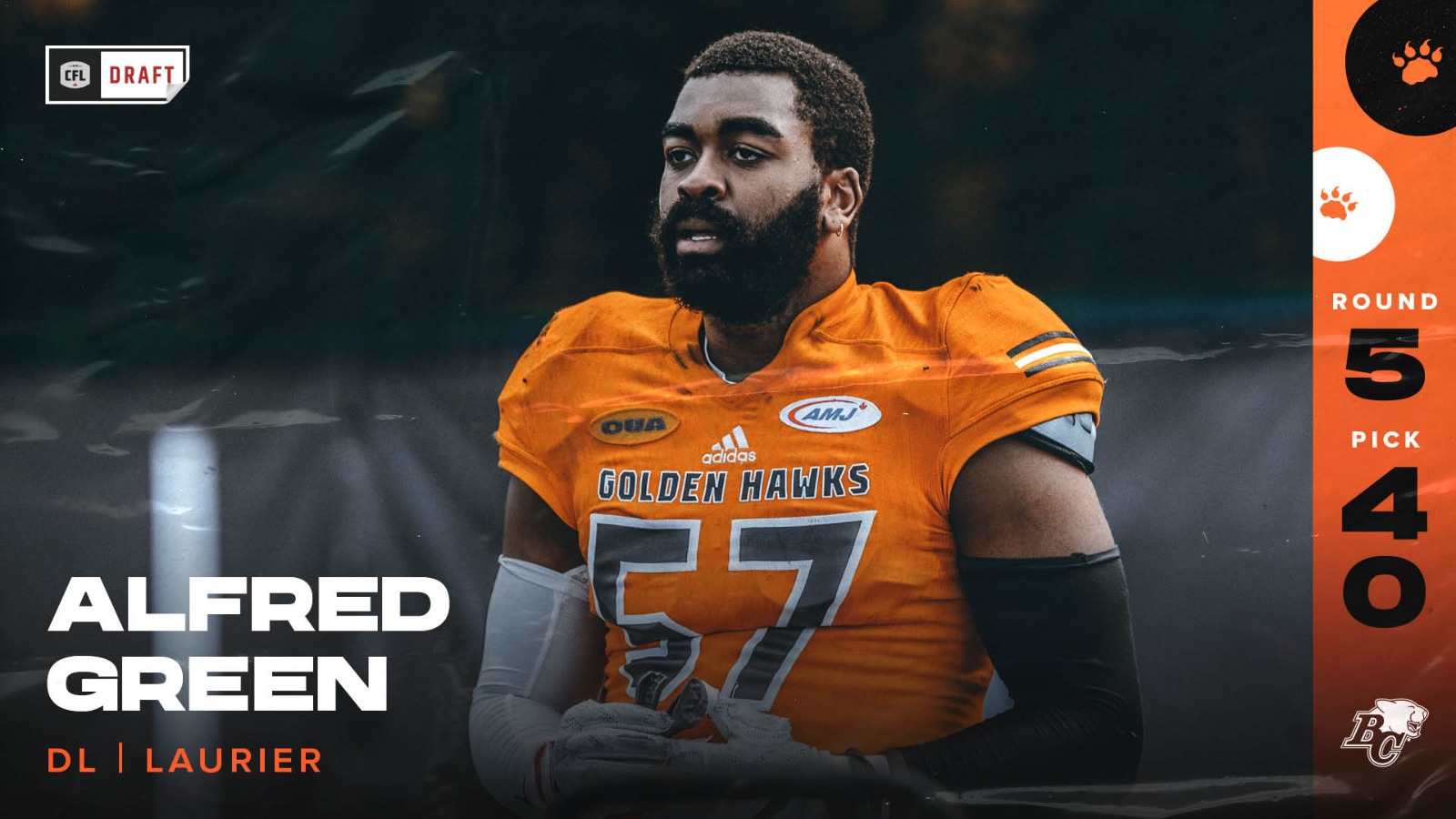 Packer, also known as ‘Pack’, is one of six Calgary Dinos prospects that heard his name called this week. It’s no surprise that he is a Green Bay Packers fan and the Dinos came away with a Vanier Cup title in 2019. Packer has been the starting tackle for the Dinos since 2017 as a rookie, the other player to accomplish that as a rookie was former Lion, Kirby Fabien back in 2009.

Packer began playing football at the age of eight. He would eventually represent Canada at the U19 International Bowl in Arlington, Texas. Packer then entered his freshman year standing at 6’6’’ and 305 lbs.

He also experienced his first taste of the Hardy Trophy in 2017 before Calgary fell to Laval in the Mitchell Bowl. Over a three-year stint at Calgary, Packer played a total of 23 games for the Dinos. On top of multiple trips to the Canada West playoffs, Packer was named the Canada West’s rookie of the year in 2017 and an all-star in 2018.

Packer also helped the Dinos to capture the school’s fifth Vanier Cup in 2019, their first since 1995. Packer started at right tackle against the Montreal Carabins in a 27-13 victory. Like Hladik, Packer and three other Dinos were also invited to the CGS, to showcase their abilities to numerous scouts in preparation for the draft. The 22-year-old offensive lineman will now join fellow former Dinos prospects, Sukh Chungh, Adam Konar and Tanner Doll in orange and black. 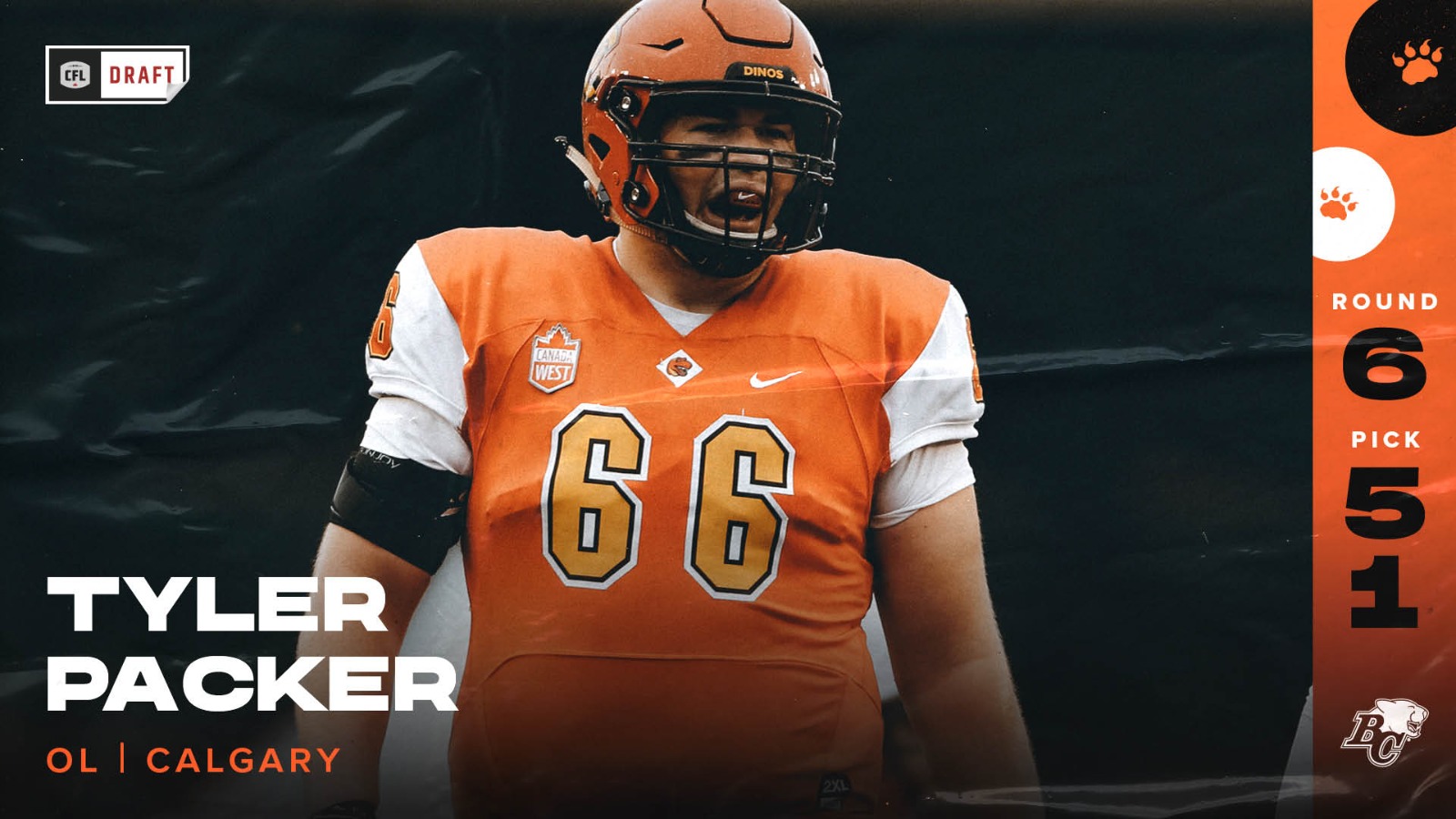