From now until the start of the 2021 training camp on July 10, bclions.com will provide a positional breakdown series to preview all the new and familiar faces, who will be taking the field at Hillside Stadium in Kamloops. We’ll continue this series with our defensive line.

The BC Lions defensive front will have a refreshing look for the upcoming 2021 season, as all the defensive linemen on the 2019 roster are no longer playing in orange and black. Shawn Lemon led the team with eight sacks in 2019. He is now making Edmonton his new home. Another CFL veteran, Odell Willis, who spent the last two playing seasons with BC. signed with Toronto earlier this year. Junior Luke and David Menard have returned to their home province to play for Montreal in 2021. And Claudell Louis is now the club’s defensive assistant on the coaching staff.

It’s a new beginning for the BC defensive line. First, was hiring CFL Hall of Famer, Leroy Blugh in 2020. Blugh played 15 seasons in the league with Edmonton and Toronto. The former CFL West All-Star has two rings: one as a player in 1993 and one as a defensive line coach with Ottawa in 2016. Blugh was a part of the Rick Campbell system when they built the team from scratch to a playoff contender and eventually to Grey Cup champion. Now he looks forward to duplicatng that success as defensive line coach in BC.

“I loved it. We came a long way. We had a bunch of guys that ended up being play fast guys and be dominant. They listened well; they ran pressures well. I was very fortunate to have these guys catch on so fast,” Blugh recalled his time coaching for the Ottawa REDBLACKS on the 1st And Now podcast.

They bought in two experienced edge rushers to lead the defensive front: Chris Casher and J.R. Tavai. Casher (below) spent the 2019 season with the Calgary Stampeders where he registered 34 defensive stops along with seven sacks. Before his CFL debut, Casher spent three seasons at Florida State and won the national championship with the Seminoles in 2013.

Tavai, the former USC Trojan, made his CFL debut in 2018 for the REDBLACKS. It would set up a stellar 2019 season when he registered 49 tackles and seven sacks.

It’s safe to say that Blugh and the coaching staff don’t have to start from scratch this time. Especially with no preseason games this year, others on the defensive front may have to seek Casher and Tavai for directions.

“Some of the veteran players here that have played in this league for a while. They know a lot of football and you have to respect them for what they bring to the table in order to continue to get better,” Blugh said

“And our veteran players are also going to help us. They’re going to be in a position to really help and condition our young players with more than just what the coaches say,” he added.

The Leos attempted to turn the defensive line into an all-star lineup in 2020 by adding Micah Johnson along with Casher and Tavai. However, it didn’t turn out the way club had imagined due to COVID-19. Johnson is heading back to Saskatchewan for 2021.

But don’t let that discourage you from the depth and talent that’ll be competing at Kamloops. As Blugh said during the 1st And Now podcast on May 21, 2021, “some of these big-name guys can really play. In my mind, I just don’t want to mess up. They know a lot about football. They’ve learned a lot about our system.”

Keep an eye on some emerging players from the U.S. like Obum Gwacham, Ufomba Kamalu, Lewis Neal and many more.

Gwacham played college ball at Oregon State. He began college as a receiver then transitioned to a defensive line where he racked up 27 tackles and four sacks in his senior year. The 6’5’’ lineman was also a high jump athlete for the Beavers.

Kamalu played at Butler Community College for one season in 2012 then suited up for the University of Miami Hurricanes for 35 games over the next three seasons. Since then, he has been on numerous NFL teams, most notably with the New England Patriots in 2018 when they won the Super Bowl that year.

Neal, the LSU product, enjoyed four seasons in Baton Rouge, played in 47 games and registered 118 total tackles, 12 sacks. He signed with the Dallas Cowboys as a non-drafted free agent in 2017 and appeared in eight games.

Another familiar name on the roster is Tim Bonner, who was featured in the Netflix series Last Chance U. Bonner stood out on the field with his 37 tackles and 5.5 sacks in 12 games. Then he transferred to Florida Atlantic University for three seasons before working out with the Miami Dolphins and the Seattle Seahawks in 2020. As well as Court Hammond and Alfred Green, they are the club’s draft picks from the last two CFL drafts. They’ll be eager to showcase their skillsets after having their football season taken away from them due to the pandemic in 2020. 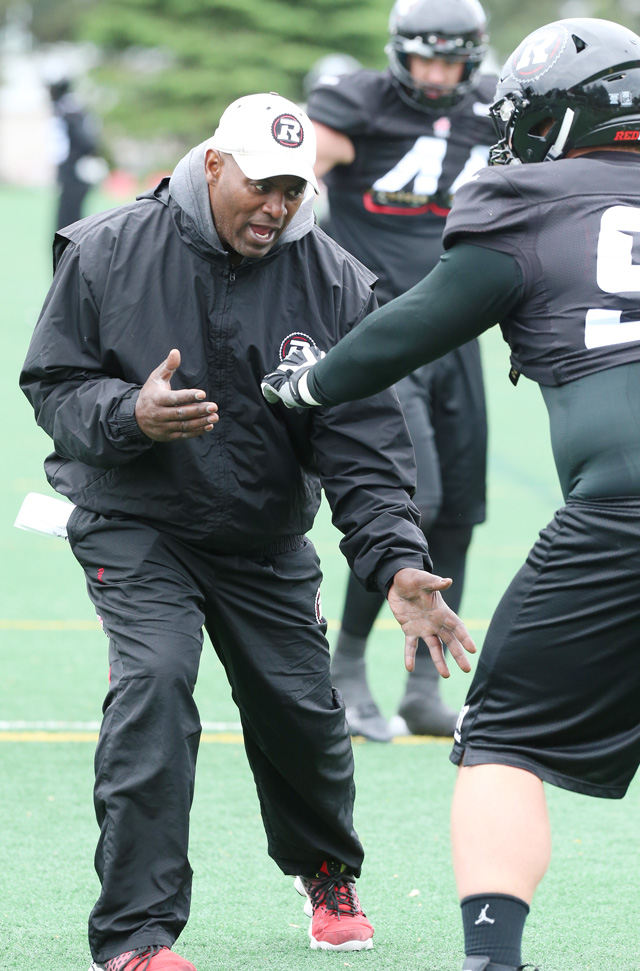 Chris Casher (A): Signed as a free agent last February and signed a contract extension on February 2, 2021.

Alfred Green (N): The Wilfrid Laurier standout was selected in the fifth round, 40th overall of the 2021 CFL Draft.

Niklas Gustav (G): The product from Hamburg, Germany was one of four selections from the 2021 CFL Global Draft. Gustav is the all-time sacks leader at Morningside College in Iowa.

Court Hammond (N): The product out of Western Oregon was selected in the third round, 23rd overall of the 2020 CFL Draft.

“Guys that learn, have a good understanding of the offence to where some of these techniques, tools they have are second nature to them so they’re not waiting or pausing to the play. They actually understand it pre-snap, they can go out and play fast, be disruptive, mess up offences,” Blugh on the ceiling of his defensive line unit.