It could be argued that this Lions squad being shaped in Kamloops already had enough playmakers on offence. But even with just one full practice under their belts heading into a stretch of evening work in Kamloops, it’s clear that Lucky Whitehead will help bring his charm and a huge dynamic to this group looking to score more points in 2021.

The better news? Once he really gets up to speed in the playbook, it should be more smooth. That’s what non-stop virtual meetings and seven days of quarantine to prepare can do to a newcomer.

“Trying to really learn the new playbook is kinda hard, so it’s definitely helping me being able to get out there on the field, actually be in meetings together, seeing stuff being drawn on the board and replicating plays, ” he explained.

“I think that’s better for myself. I’m picking it up pretty well.”

In case you missed it earlier this offseason, we outlined what led to him being called ‘Lucky’ on an episode of 1st and Now.

“I think only my mom refers to be as Darnell (his legal name),” chuckled Whitehead during a call with media via ZOOM on Monday.

He should definitely be motivated to help bring some of that charm needed to help this group make a run at a Grey Cup this season. Although not active for the playoff run, Whitehead earned a Grey Cup ring with the Blue Bombers in 2019 after playing a key role as both a receiver and return specialist for most of the season. This writer recalls a big 104-yard kickoff return touchdown in a contest against Toronto.

He migrated north after suiting up with the Dallas Cowboys and New York Jets. As a non-drafted Cowboys free agent, Whitehead assumed mostly special teams duties, recording over 11,000 total return yards in his two-year stint in the Lonestar State.

“It’s been a wild journey, but I enjoy the process.”

Another incident took place in Dallas that suggests he definitely lives up to his name. It was when Blitz, his English Bulldog, was kidnapped and held for ransom after Whitehead had left him with a friend when visiting Miami.  Somehow, the dog ended up in possession of Fort Worth rapper Boogoti Kasino. 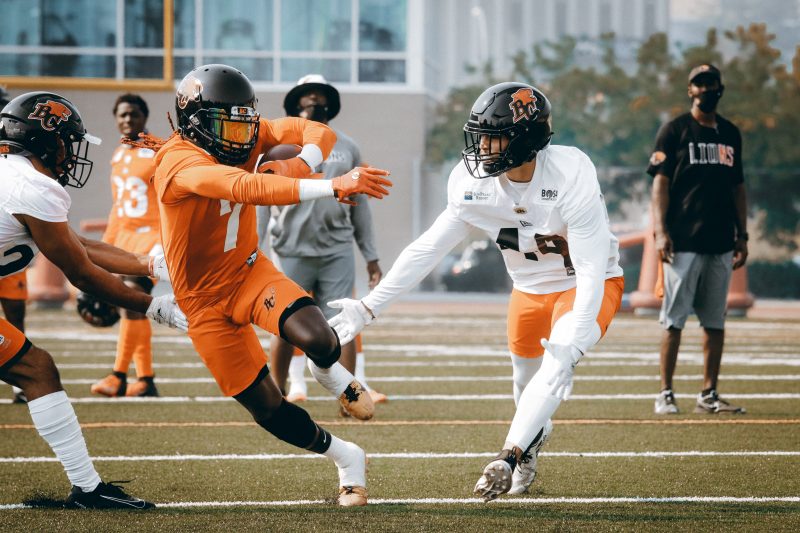 “I had gotten a call at the airport asking how much the dog means to me and would I be willing to pay to get it back,” explained Whitehead on 1st and Now back in February.

“My nerves were just all over the place at the time. My flight was probably like three hours and it felt forever. Once I got to my house the cops were already there checking the crime scene, doing everything. I was just trying to gather information at that point.”

Lucky quickly got Blitz back after it all appeared to be an attempt by the rapper to do some promoting on social media. At any rate, that’s a scary situation for any pet owner.

Through all the craziness of the last 16 months, now Lucky number 7 is ready just to focus on winning football games.

“I’m definitely excited to be part of this offence and what they’re building over here.”

We Own The Night

Due to other events taking place at Hillside Stadium in the morning, the squad is scheduled to practice at 7:00 pm for the next five nights, beginning Monday at Hillside Stadium. Along with getting a break from the Kamloops daytime heat, these will also be designed to help simulate a typical game day schedule. Perhaps another thing that will be beneficial with no pre-season action in 2021.

“I didn’t want to go in the heat of the day, I think it’s supposed to be in the mid-30s. If we did it, we’d practice at 1:00 so literally the heat of the day. It’s still going to be warm at night and I think our first game is Saskatchewan will be at 7 or 7:30, so I don’t think it’s a bad thing to experience that for a few days and the end of practice will be under the lights, so that’s cool too.”

Both Whitehead and fellow newcomer Anthony Cioffi echoed the excitement of getting under the lights this early in camp. Cioffi was instantly reminded of a similar routine during his college playing days at Rutgers. It will be a fun few nights at Hillside.