There were some Blizzards in the Kamloops forecast for Tuesday afternoon. About 16 in total, if we’re being precise. As offensive line coach Kelly Bates and his group of big men were preparing to sweat it out for another round of evening practice, there was an important celebration to take care of first. Rookie Tyler Packer turned 22 years young. All the more reason to have Dairy Queen delivered to the Thompson Rivers campus.

“These moments are always a staple of any camp. It’s about establishing those bonds. It really goes a long way in helping us achieve our goals for the year.”

Frozen treats also serve as a nice little icebreaker for newcomers to the group, such as Ryker Mathews. A 2019 East Division All-Star with Hamilton, the big man from American Fork, Utah was a prized free agent addition in 2020. So far, he has looked good at right tackle and given any indication he could be the missing piece this group was seeking.  Big, bearded and mean when he straps on the pads, he also looks the part. And so far, he’s loving every moment of it.

“If too much fun was a thing, then I’d say it’s definitely too much fun. I’m loving it,” he said.

“Everyone is working hard, we’re all helping each other and nobody is excluding themselves. We’re all working with each other, giving each other these tips while understanding it’s been 18 months. It’s been a long time since we played. We make little mistakes here and there, coach each other up and nobody takes it personally.”

At 29, Mathews is one of the more experienced big men of the bunch. While only entering year four up in Canada, he has NFL training camp experience with the New Orleans Saints in 2016. Fun fact: he was also a teammate of current Saints QB Taysom Hill at BYU. Despite his veteran status, Mathews always wants to learn.

“You always want the vets around to groom the young guys to be great players and then you also want the vets to take care of the job right now. We’ve got the perfect mix. I don’t even consider myself a long-time vet. I look at Fig and Sukh for talking points and teaching. That will make me a better player.” 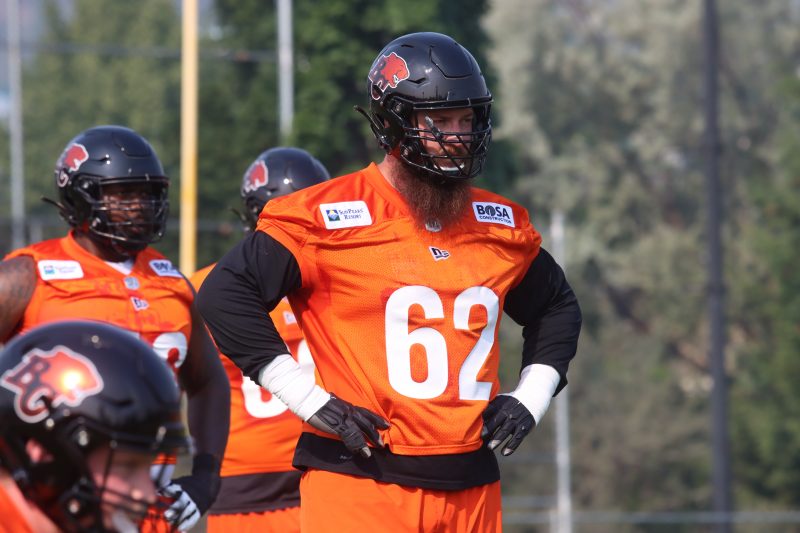 And given how he came so close in Steeltown, the main motivation for Mathews at this point is to sip from the Grey Cup.

“That’s all I want to do. I wouldn’t have come here if I didn’t think a Grey Cup was on the table. The entire team is in the same boat. That’s what we’re striving for.”

But first, it was off to enjoy the Blizzards and any other cool treats that arrived following lunch.

“You’ve got to celebrate the small victories. It’s Packer’s birthday, man. Why not have some Dilly Bars and celebrate? There is never not going to be a brother that wants to celebrate another brother’s birthday.”

The big men are bonding early. That, you love to see!

We joked with Lucky Whitehead that being part of yesterday’s camp notebook was responsible for good karma. Lucky had the play of the night on Monday, a 73-yard bomb of a touchdown pass from Michael Reilly. The speed he had to get behind coverage was what made the play possible. Bryan Burnham had the other long touchdown of the evening.

The defence responded well to end the night with a couple of big plays from the secondary that got the entire unit absolutely fired up in celebration. Players continue to conduct themselves in the best manner possible, given the unprecedented circumstances in this camp.

“I like where it is,” said head coach Rick Campbell.

“Obviously, there are areas we have to grow. But a couple of things I like is, one, they’ve spent a lot of time over these last 18 months together. A lot of the guys live in the lower mainland and hang out there. It’s not like they just walked in here to Kamloops and tried to develop chemistry. That part is very encouraging. Last night in practice was good because we finally got them in pads. We kinda had to reign them in a bit. I reminded them that we’re playing against ourselves.”

They will do it all over again on Tuesday at Hillside Stadium.