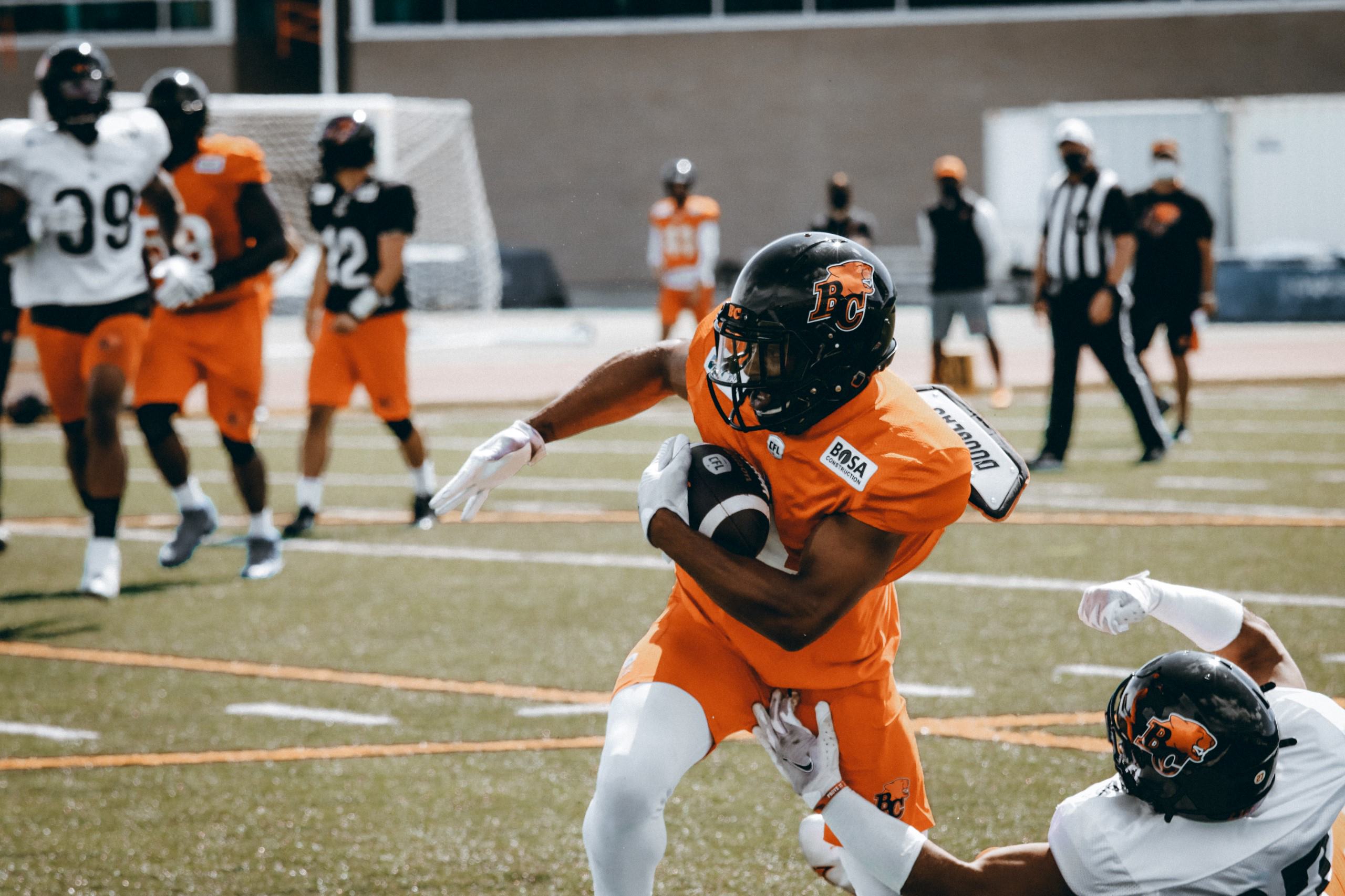 Keon Hatcher knows what it takes to rise to the occasion. Whether it was a big performance for Arkansas in 2016 where he caught two touchdowns against number one ranked Alabama, or clutching up in pre-season action with the Raiders in Seattle to solidify a roster spot, the new Lions receiver has experience when the eyes are on him.

Through 12 days of training camp in Kamloops, he has taken advantage of another opportunity; reps with the first-team offence. So far, he has enjoyed the adjustment to a new brand of football.

“Learning these CFL rules, learning the waggle, everything is different from the NFL. It’s just playing football. I’m going about it trying to make plays, be fast and help the team. I definitely embrace it.

Just being able to do the waggle, I feel like it’s kind of hard for DBs to stop that. Every chance I get to do a waggle, I feel it’s an automatic win. So that’s a pretty exciting thing for me.”

“(He’s) picking stuff up, looks the part and he’s getting into a mode where he’s understanding the offence and he looks really good out there. We’ll see how this all plays out. He still has every opportunity to crack the playing roster and we’ll have to make big decisions on the practice roster if he’s around. He’s definitely in the mix of a guy that shows a lot of promise.”

The moment where Hatcher proved he belonged in the NFL came at the tail end of his first training camp with the Oakland Raiders; under the bright lights of what was then known as Century Link Field in Seattle.

“Our last pre-season game in 2018,” recalls the Tulsa native.

“I think I went something like eight (catches) for 130 (yards) and scored three touchdowns. That’s probably the highlight for me as far as my NFL experience.”

The result was a spot on the Raiders active roster for the first two weeks of that season, after he had spent all of his rookie year of 2017 on the practice squad. The chance to be in the huddle with Derek Carr and some other key playmakers wound up doing wonders for Hatcher’s development.

“It was great. Derek is a great quarterback and it was just the chance to go out there and live out my dream of playing in the NFL,” said Hatcher.

Hatcher’s time with the Raiders ended during that same 2018 campaign and he later spent time on the practice roster with Detroit, Green Bay and the New York Jets before landing with British Columbia just weeks before the start of training camp. With veterans such as Bryan Burnham and Lemar Durant taking limited reps before camp really kicks into high gear, Hatcher has stepped up with this big opportunity. 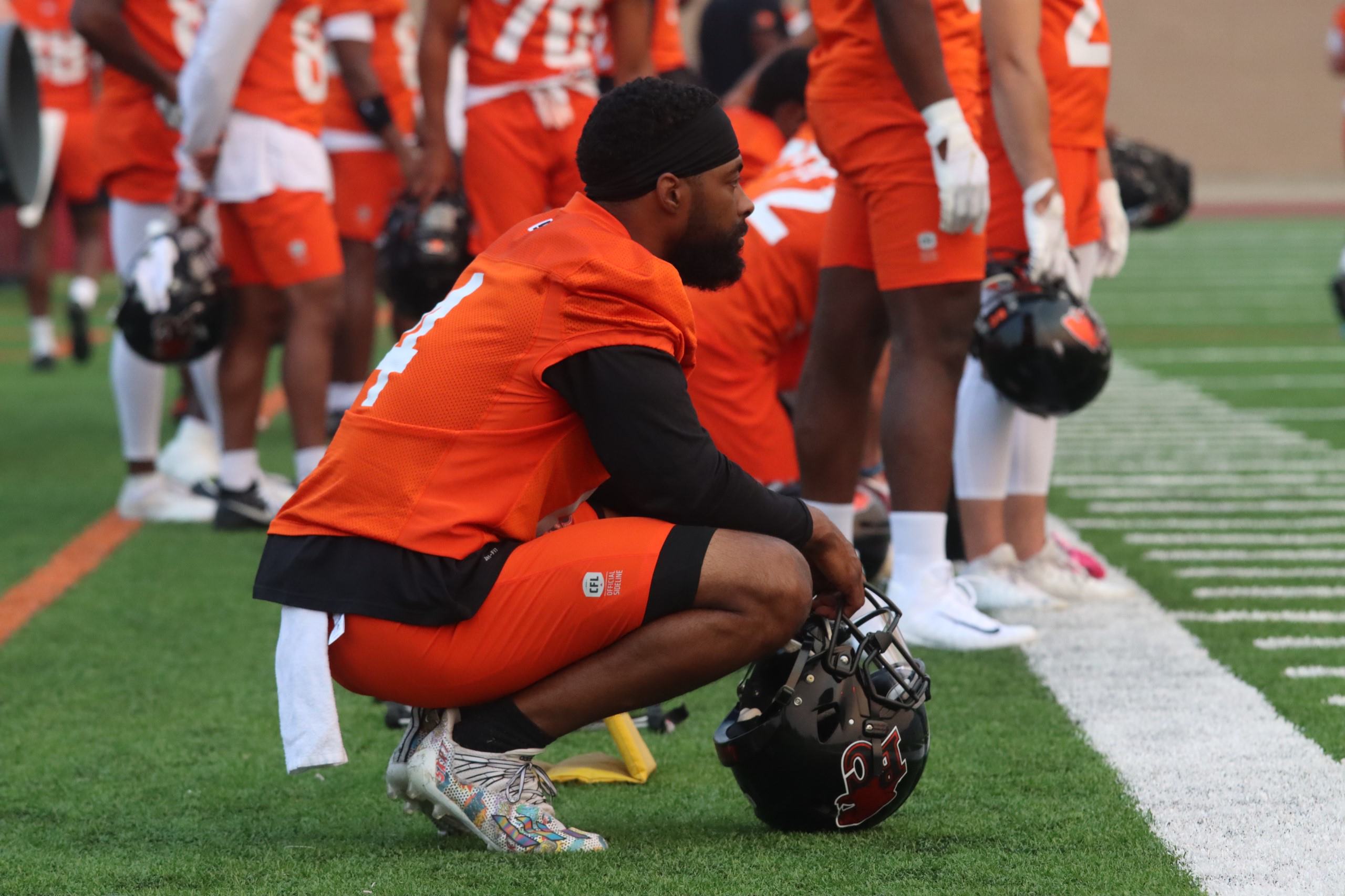 Like his time down south, he takes his cues from working with an elite quarterback in certain drills.

“Michael is a great leader. He’s helping guys out, teaching guys the playbook. He’s teaching the young guys and bringing us along. He’s been in it for a minute so he knows the ropes, he knows how it goes. He’s been a great leader for us and just keeps pushing us each and every day to get better.”

The same mindset from Arkansas that made him a Pro Football Focus All-SEC second-team selection and earned him an invite to the NFLPA Collegiate Bowl after his big outing against Alabama in 2016. This team is loaded at receiver and Hatcher represents some of the younger blood being considered in Kamloops. He and the rookies will look to shine in Saturday’s second scrimmage at Hillside Stadium. 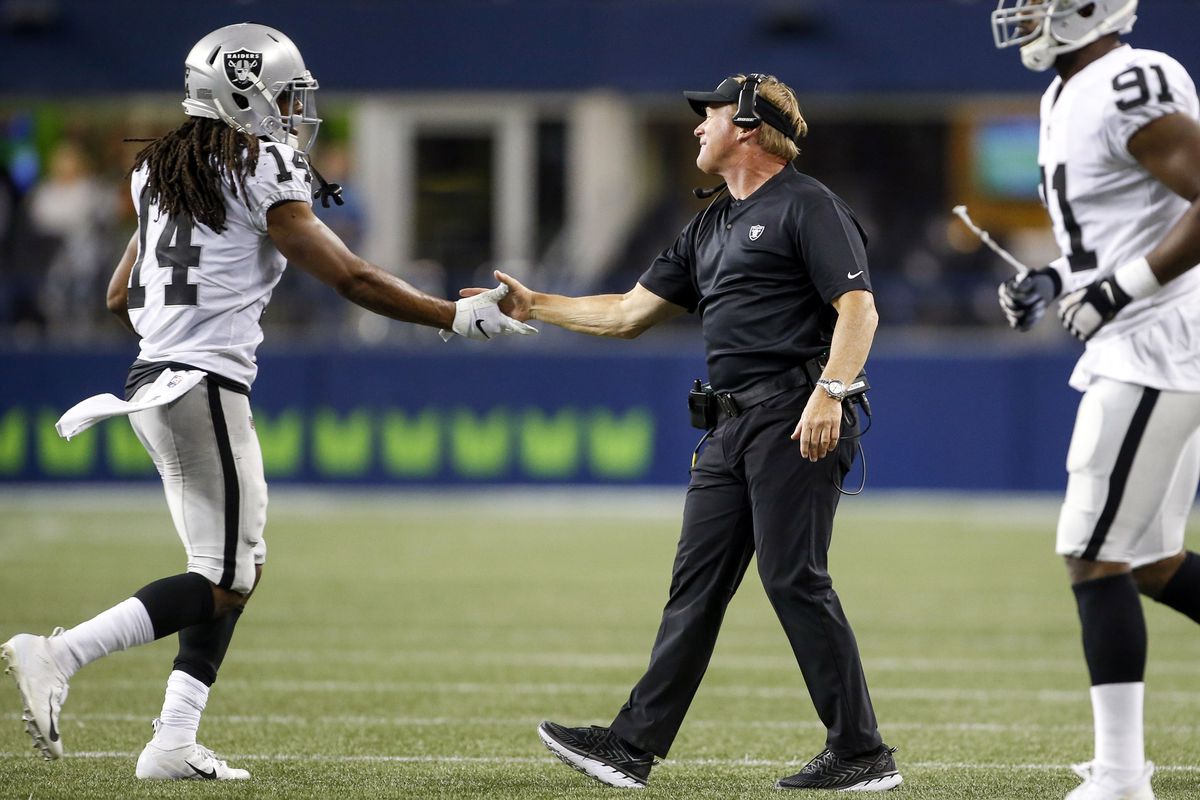 The group was back for another morning session at Hillside Stadium, once again wrapping up after two-and-a-half hours as head coach Rick Campbell looks to keep the team fresh with two full scrimmages and four regular practice days remaining until camp breaks.

One big takeaway: the kicking and punting game showed strong today. Both Global Jake Ford (Australia) and American Stefan Flintoft had some booming punts in the special teams while Takeru Yamasaki of Japan continues to kick field goals. It will be interesting to see how those duties get assigned for the final roster.

Newcomer Ade Aruna made his practice debut on the defensive line after his quarantine period ended. He arrived in Kamloops last week. Aruna looked noticeable in at least one of the team sessions putting pressure on the quarterback. Originally born in Nigeria, Aruna was a sixth-round draft pick of the Minnesota Viking in 2018 and also spent time on the practice squad with the Oakland/Las Vegas Raiders in 2019 and 2020.

Lemar Durant was back taking part in full practice while Bryan Burnham continues to work out on the sidelines.