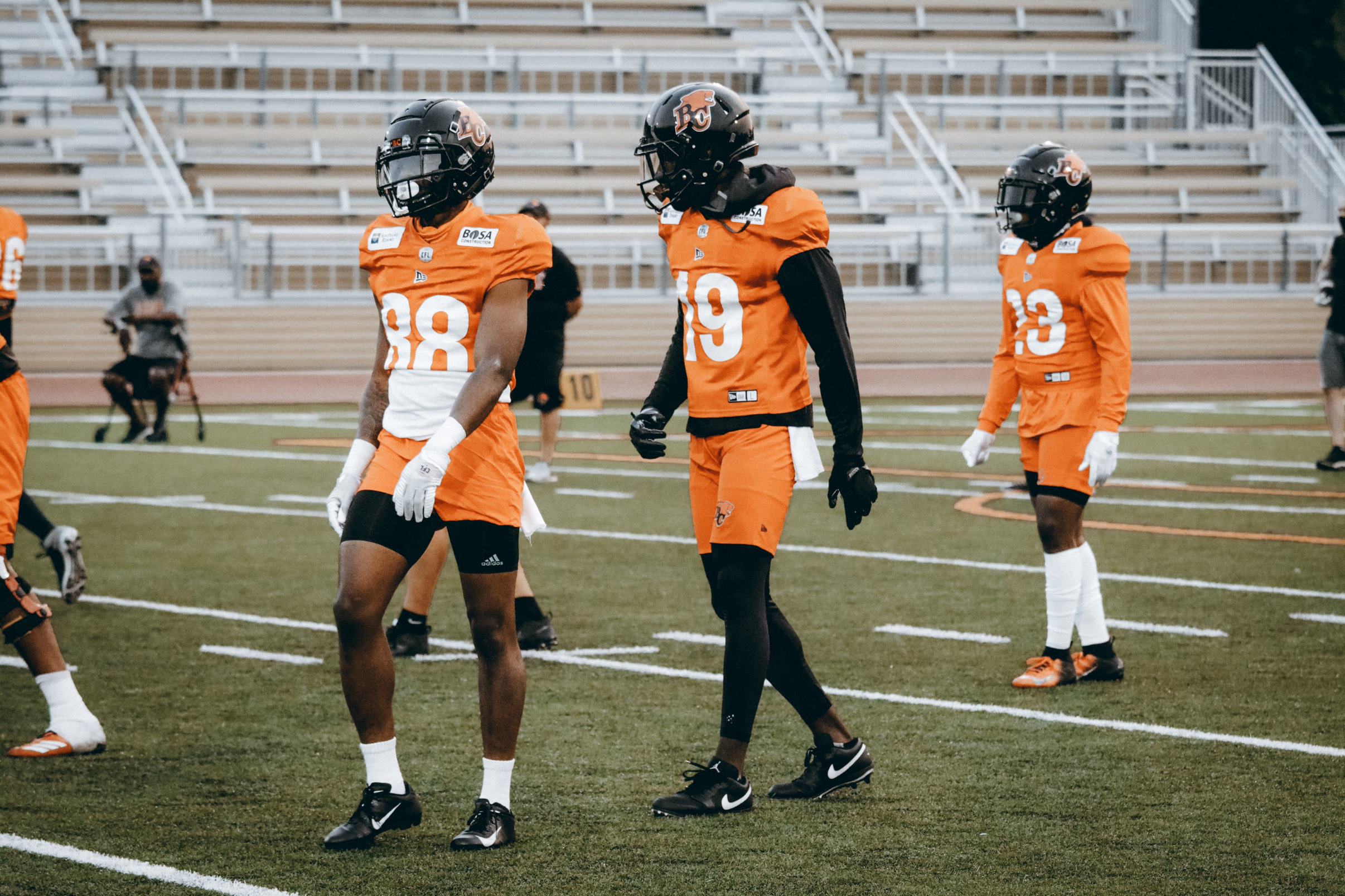 With only four days of full on-field work remaining in Kamloops, BC Lions veterans and rookies hit it hard Saturday morning at Hillside for their second of three team scrimmages.

Without any pre-season games to prepare for and another big round of cuts coming in the next couple of days, everyone knows what’s at stake. Head coach Rick Campbell can be satisfied with two big factors from scrimmage two. The offence performed better and some of the newcomers who might be on the bubble were able to stand out.

“We did some good things today; made some big plays. I think both sides of the ball did,” explained the head coach.

“I think it’s really good to see these three quarterbacks play, Patterson, Arndt and Rourke, is to get those guys in there, really see what they can do so we can get a good evaluation about who number two is. (We’re) definitely getting good looks and a better feel for what people can do. You saw a lot of new guys play a lot of reps today, which I think is good.”

It definitely has to feel good for him to mention the three quarterbacks all doing their part to earn a spot behind Michael Reilly on the final roster. Coaches and personnel folks are currently breaking it all down as they need to trim the roster down to 62 (45 plus 17 more on the practice squad) later this coming week.

Shaq Johnson was a major catalyst in the offensive turnaround, hauling in a super long pass from Will Arndt near the start of the session and making a couple more big catches in different situations to keep the sticks moving.

The first offensive touchdown of the day came from rookie receiver Alex Wesley on a nice pass from Nathan Rourke in red zone drill. A product of Northern Colorado, Wesley spent time on both the New York Giants and Chicago Bears practice rosters in 2019 and 2020.

Rourke himself continues to progress. He also scored on a ten-yard scramble later in the same red zone situational practice.

Mission native Jesse Walker had the other touchdown reception of the day.

One of the young receivers who made the most of Saturday’s opportunity was Jake Bofshever (pictured below), a former standout at Long Island University. He made a brilliant effort to land with one foot in bounds on a touchdown reception from Will Arndt late in the sdrimmage. The key is the fact he never gave up on making a play. That will surely give him some kudos in the film room, as will the fact he managed to land in bounds. Bofshever made a handful of other key receptions to help move the sticks in other sessions.

Overall, the offence will be satisfied with the improvement from last week.

“It took a little while for guys to shake their rust off, get their legs back and get back to football speed. We definitely threw a lot at them playbook-wise. I think the guys did a good job of picking it up. At the beginning of camp, maybe they were a little bit slow because guys were out there thinking, so their feet weren’t moving as fast. Now that the offence has sunk it a little bit, I think guys are a lot more comfortable, they’re playing fast and they’re going out there and making plays. That’s good to see.” 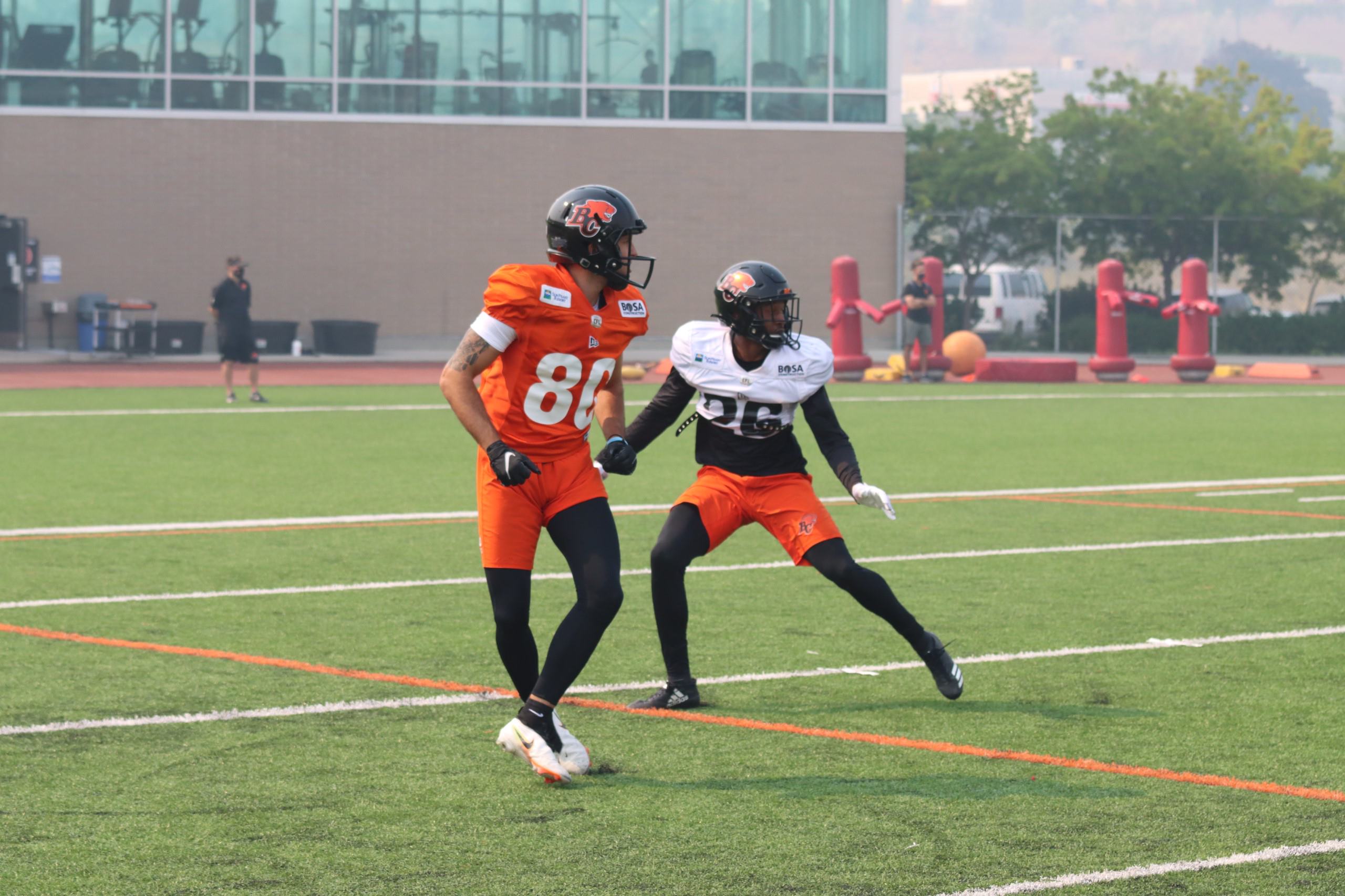 The Defence Does Its Thing

No shame at all for the defence that still made some big plays of their own in this scrimmage. Interceptions came from newcomers KiAnte Hardin (pictured with Dominique Rhymes below) and Jordan M. Williams, the American linebacker out of Baylor. Hardin’s takeaway came in the end zone to snuff out an otherwise impressive drive for the offence.

On only his third day of active work, defensive end Ade Aruna, a one-time sixth-round pick of the Minnesota Vikings, made his presence known early and often. He recorded at least one sack.

Anthony Cioffi and Adam Konar were among those who made plays in the back end. Cioffi is noticeable on both defence and special teams for his speed.

Shaq’s little brother Hakeem Johnson made a nice diving play to break up a pass early in the session before the offence was able to get into a groove.

Overall, it was a solid morning of complementary football, something that will be welcomed with only 13 days between now and the opener in Regina. 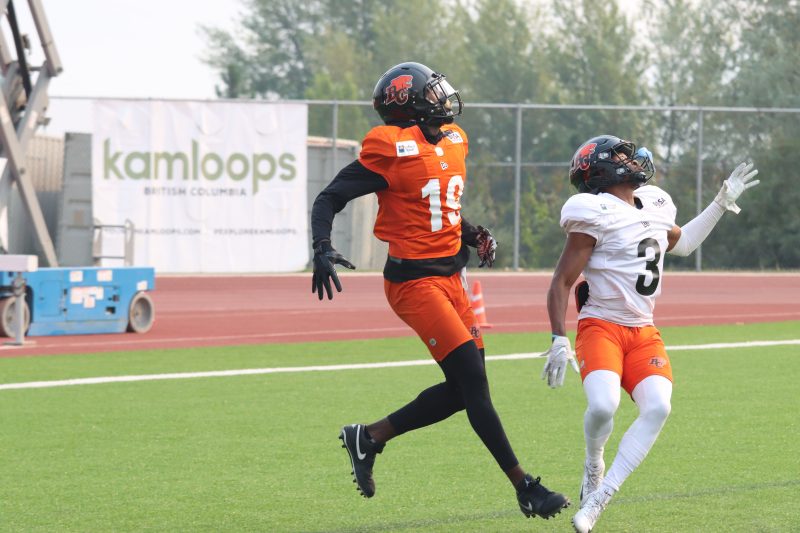 It was another decent spectator turnout at Hillside as many of our great Lions fans are craving and relishing the return of football. Following the wrap-up, Campbell urged each and every player to jog to the end of the field to wave and salute them all for coming out to support them. You could sense just how much the fans enjoyed it and how much the players fed off having them in the crowd.

We 🧡 our great fans!

Thanks to those who came out to support us this morning at Hillside. 26 days until we’re back at @bcplace 🙌🏿#ThisIsOurPride pic.twitter.com/8F728QPFW1

The squad will have a short recovery walkthrough on Sunday before returning to morning practice (8:30 am-11:00 am) on Monday, Tuesday and Wednesday of next week. Camp wraps up with a final scrimmage (8:30 am-10:45 am) on Thursday morning.