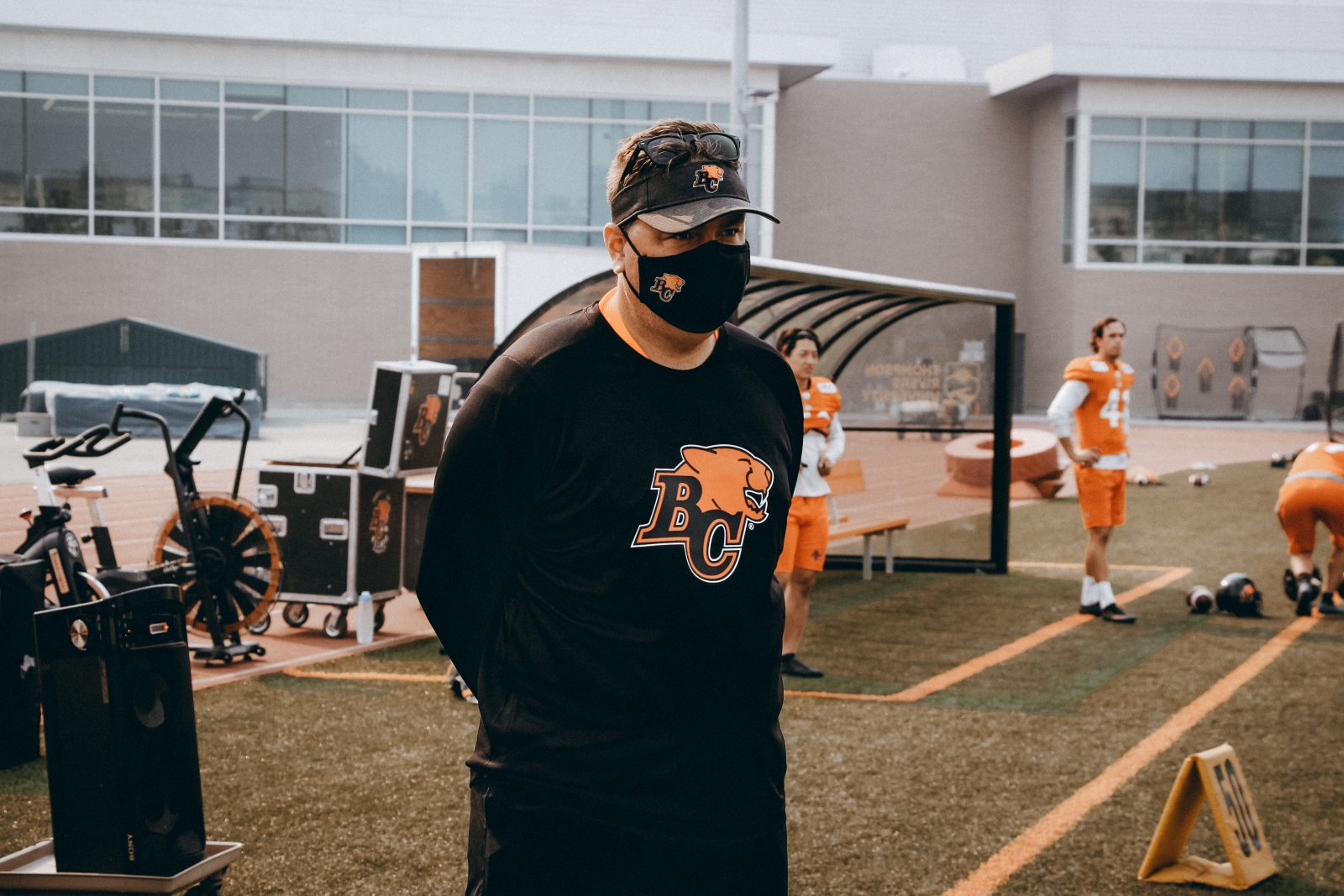 As 2021 BC Lions Training Camp enters its final two days in Kamloops, bclions.com sat down with Leos Co-general manager and director of football operations Neil McEvoy over breakfast for a discussion on where the team is at heading into its 67th regular season.

A member of the organization since 1995, McEvoy has attended training camps in many different roles with the club but this has been the first at the top of the football operations chain, duties he shares with head coach Rick Campbell.

Just like any training camp, this one has had its share of surprises and intriguing storylines. This year, those involve the various COVID protocols and much more that haven’t been dealt with in training camps from years past. Through it all, McEvoy and the entire Lions brass are excited about the team being assembled as we prepare to kick off the 14-game sprint back to the playoffs.  Here is what McEvoy had to say about a variety of topics.

Matt Baker: Let’s start there, with your new role. How have you approached or viewed this training camp as opposed to others where you had different duties in the personnel department?

Neil McEvoy: It hasn’t really been different. Things have gone as planned. Things have fallen off the rails as planned (laughs). All of the football operations people have worked well together, just like we always have. This team on the field just looks like a good football team.

It’s getting to the point now of getting practice finished, getting out of Kamloops, back to Surrey and getting on the field at BC Place and into Saskatchewan next week. That part hasn’t really changed. It’s always been the focus over the last 20 years. Training camp goes as it goes. There are always going to be derailments and always going to be highs and lows.

Now, I’ve always put myself in a position to deal with them, whether that’s working with Wally or Ed. Now I’m dealing with it with other people. That part hasn’t really changed.

MB: How would you describe the way Rick Campbell coaches? Just watching him at practice, he seems to run a very tight ship but in a more controlled way if that makes sense.

NM: I really enjoy working with Rick and love the way he commands his team and demands guys to be accountable. It’s a different way than what we’ve maybe been used to but at the end of the day, demanding accountability is what you need from the head coach.

He certainly does that. Guys listen to him and this camp has really developed into lots of good camaraderie off the field with players and lots of good competition on the field, which at the end of the day equals good football. So far, he’s really got his guys in line and they’ve bought into the system of what we’re doing. This is our second year working together and first with a team on the field. The future is looking really good.

MB: Has there been an area or position group that has exceeded your expectations?

NM: I don’t know about exceeded. Certainly, a position we were nervous about because we didn’t have the information on the field that we might have felt we wanted to was the defensive line.  I think the defence as a whole, our defensive backs we felt were good because of the veteran presence, but the defensive line we didn’t know as much about save for the veterans we had coming in.

To be quite honest, those guys on the line have really jumped off a page and done things that we just didn’t expect them to do. Those expectations have just flown through, which is great. Even the linebackers; we have rookie linebacker Jordan Williams there. We expected him to be what he is but we think he’s actually exceeded those expectations. He looks like he’s going to be exactly what we want him to be, which is a first round draft pick starting on our defence on day one, which is where he’s going to be.

On offence, having guys like Lucky Whitehead and Chris Rainey is just going to make us a lot faster. Lucky, from day one, has just given us the opportunity to be a fast football team. As any defensive coach will tell you, speed kills. Right now we do have some good speed and a lot of good compliments on the other players as well. So far, I’m excited about all aspects of this football team. Things have gone exactly how we’ve wanted them to go. 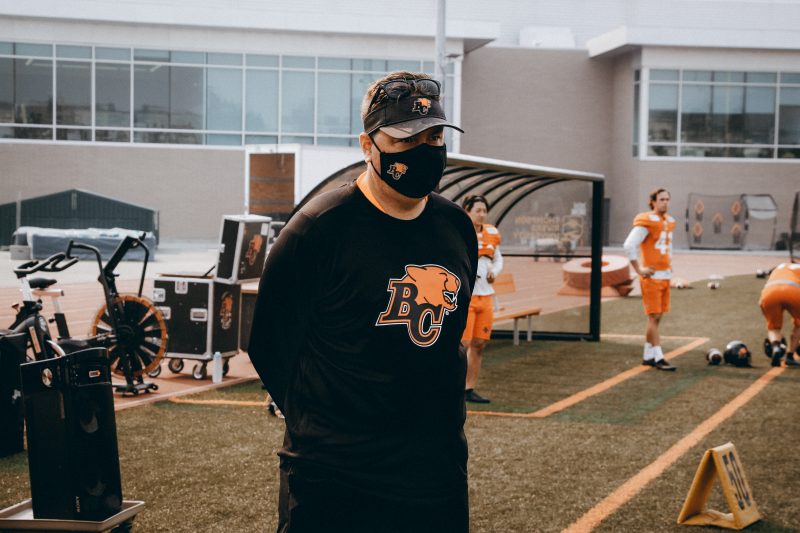 MB: Let’s talk quarterbacks. What does it say about Nathan Rourke that he was able to beat out a more established veteran for a roster spot?

NM: Rourke has jumped off the page and done things as a first-year quarterback, and I don’t care where you’re from, that are just really excitable not only for this year and securing the number two spot, but for the future. I’m excited for him; as a guy who now lives in the lower mainland and who was born in Victoria. When was the last time you could say the BC Lions have a number two QB and potentially a guy who can start for us who is Canadian?

Regardless of where he’s from, he’s just a really good football player. As a quarterback, his energy is excitable and everyone just rallies around him. All of those things that you saw in college; he won football games and his players really loved him and played for him. You could see that on this team here. That’s tough to do as a first-year guy, especially when you have hall of famers like Michael Reilly, our number one quarterback. Nathan has done things that are just amazing. I’m so happy for him, happy for all of us.

MB: Speaking of Mr. Reilly.. He’s back throwing. How will the rest from the earlier days of camp practice benefit him as we get closer to Saskatchewan?

NM: Just talking to him, he was excited to get back here. We were all excited day one, but not all of us had to throw the ball. I think he just threw the ball about a thousand times and it’s like being a pitcher in baseball: you throw too many balls and things are going to start aching. We put him on a little bit of a pitch count and we’re at the point now where he;s able to throw the ball and do much more.

I’m not saying I liked he was out for so long. But having him out those first couple of weeks really gave the other two quarterbacks the chance to shine. The fact guys like Nathan Rourke and Shea Patterson stepped up and did just that really gave them the opportunity to show what they had. If Michael was here the whole time maybe they wouldn’t have because the coaches could have decided he needed more time to run the offence, which would limit the other guys to get those opportunities. I think it was a blessing in disguise. Michael is a lot more fresh and able to practice, Nathan we’ve solidified as our number two and Shea will with us as the number three. It all worked out in the end. 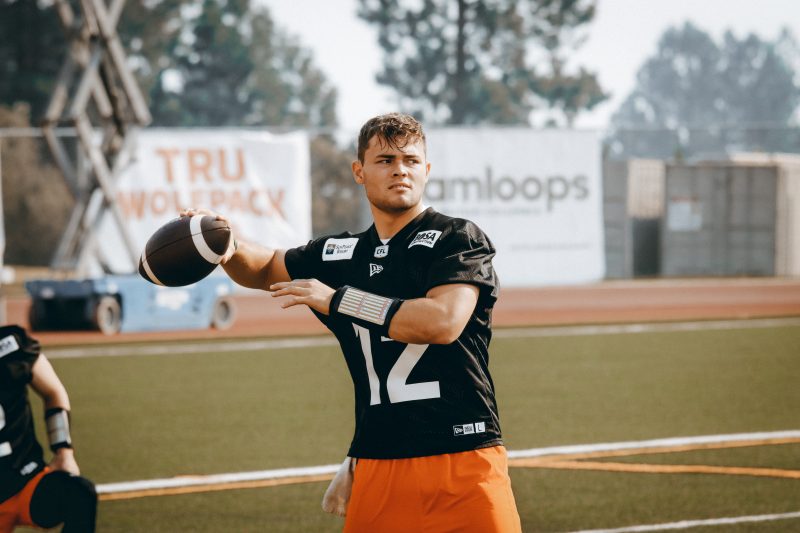 MB: This camp has been anything but normal. When you factor in quarantine, being forced to stay on campus, multiple COVID tests, protocols, lining up for meals and then today smoke wiping out practice,  how would you say the group has handled it all?

NM: I had a bunch of sleepless nights. Not football-wise, just logistical-wise. All of the things we had to go through; the PCR Covid tests, getting through Canadian immigration, all things that were just stacked against us.

To be quite honest, Tyler Gammon our young guy working in football operations, as stressful as it was for him, worked very hard to get it done. With all the things that were stacked against us, I’m pleasantly surprised at how things went.

We’re winding down camp now and there really aren’t any issues that could have been dealt with better than the way we did it. That’s a testament to everybody just working together and working hard. And that’s players too. This is the first time in history we’ve had to bring guys in with the Canadian border closed. These are things we’ve just never had to deal with. We’re getting ready to play Saskatchewan now is great. I’m excited about it.

Following the smoke wiping out Tuesday morning’s practice, the squad was aiming to have a short walk-through either on the field or in the facility building at some point in the afternoon.

They will be back on the field Wednesday morning from 8:30-10:40 am before Thursday’s final scrimmage at the same time.