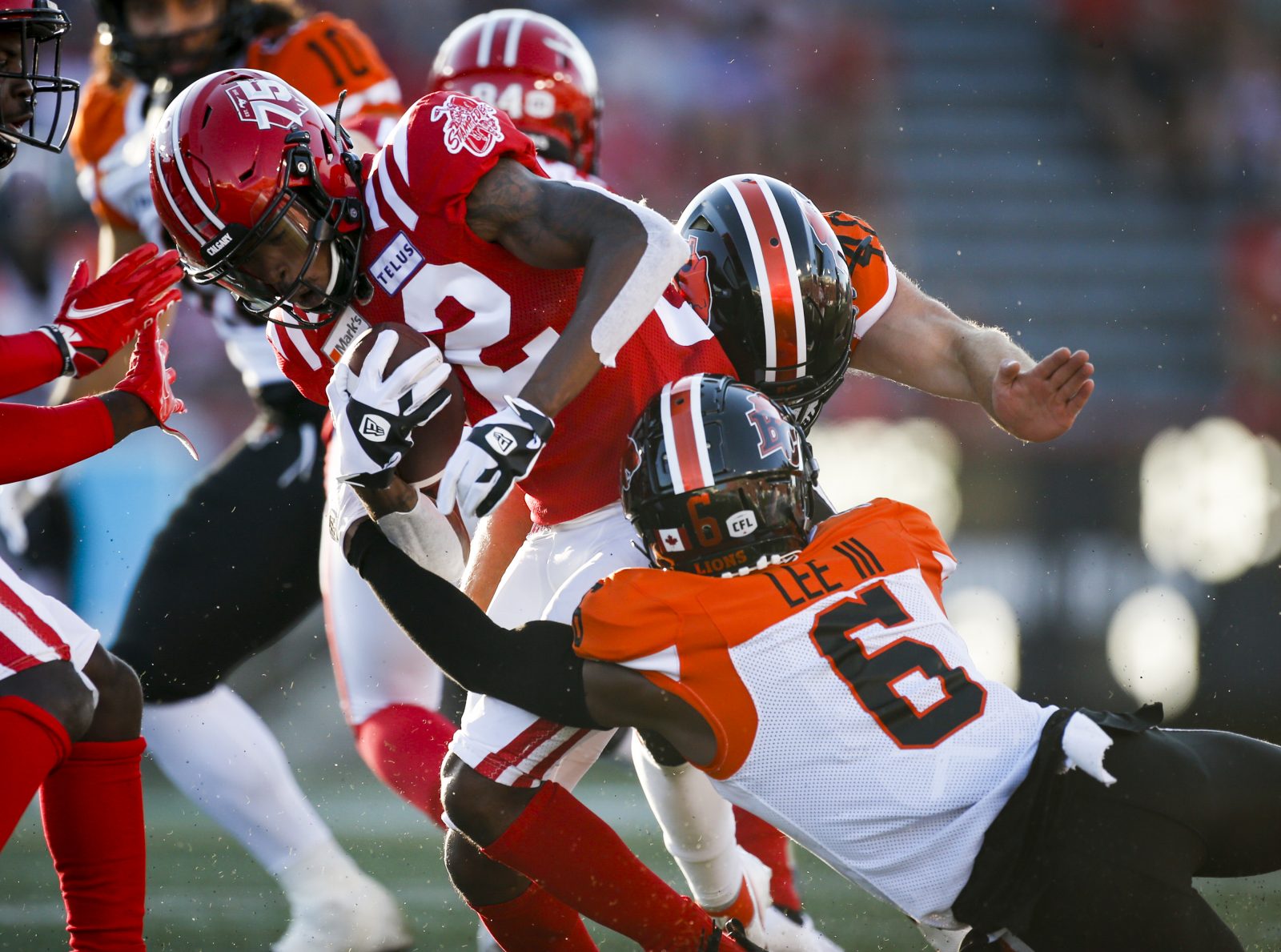 BC Lions' T.J. Lee, right, grabs for the ball in the hands of Calgary Stampeders' Malik Henry during first half CFL football action in Calgary, Thursday, Aug. 12, 2021.THE CANADIAN PRESS/Jeff McIntosh

It was a night that began with more quarterback fireworks.  But at the end of the day, it was defence that owned the night as your BC Lions intercepted Bo Levi Mitchell four times in a 15-9 victory at Calgary’s McMahon Stadium. It wasn’t an oil painting. But the squad will certainly take it into next Thursday’s home opener with the Edmonton Elks. We now present some Game Takes from the week two victory against the Stampeders.

After some persistent treatment and throwing reps early in the pre-game warm-ups, Michael Reilly was deemed good to go and was promptly announced as the team’s starting quarterback 30 minutes before kickoff. And it didn’t take too long to establish his right elbow was just fine, thank you very much.

Number 13 came out of the gates strong, completing nine of his first ten passes and scoring the game’s lone touchdown on a one-yard plunge. His 65-yard connection to Bryan Burnham that helped set up Takeru Yamasaki’s first field goal of the night was certainly a completion for the ages. In short, it was brilliant to see him come out and perform while also erasing some concern over how serious the injury was. He said himself on Monday it felt better than he anticipated it would after the loss in Saskatchewan.

Reilly finished his night 26/33 for 342 yards..He also moved past Darian for 14th on the CFL’s all-time passing list, now sitting at 32,067 total yards for his great career. Burnham led all receivers with 121 yards while Lucky Whitehead (108) was over the century mark for a second straight week. 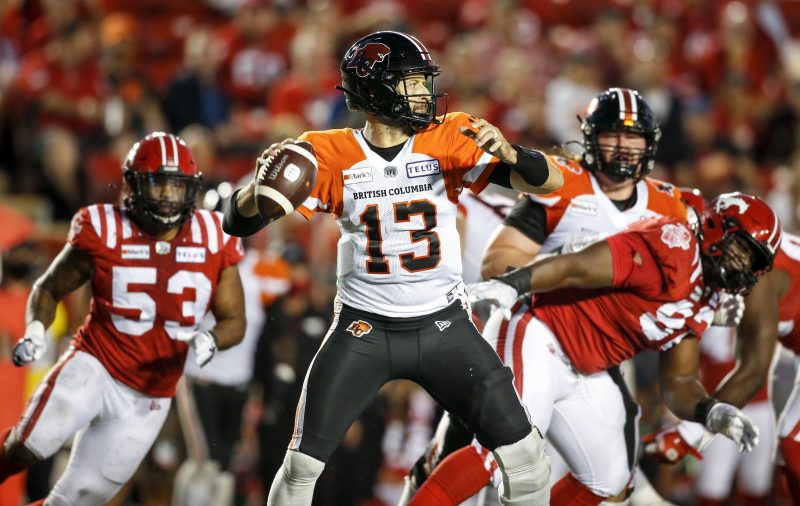 The four interceptions came from Marcus Sayles, Bo Lokombo plus rookies KiAnte Hardin and Jalon Edwards-Cooper. Harden’s leaping end zone takeaway ended a Stampeder scoring threat while Edwards-Cooper, in his first CFL start, deflected a pass into his own ends to put Calgary on the ropes late in the fourth quarter. We talked about the secondary being the veteran backbone of this defence. To see two CFL newcomers contribute is a great bonus.

Major hat tip to the defensive line as well. Lokombo, Obum Gwacham and Tim Bonner all recorded sacks. A major tone-setter in the opening quarter came when Gwacham stuffed Stampeder QB Michael O’Connor on a 3rd and 1 deep in Lions territory. This unit would not be denied tonight.

Perhaps some critics and observers will start to understand what some of the excitement was about regarding some newer names on this defensive line. They certainly earned their keep in this victory. And how great is this? They’ve allowed no touchdowns and exactly ten points in their last six quarters of action.

Fall Down, Get Back Up

There were certainly some opportunities for this one to slip away. A prime example came in the third quarter when Lemar Durant’s fumble gave the home team a chance in Lions territory. That’s when Lokombo came up with his big interception. A roller coaster ride in the second half, but Rick Campbell’s squad proved to make more plays in the end.

That perfect mix of veteran leadership and young blood. Very good to see them perform.

Oh, and by the way.. kudos to the head coach for picking up his first victory in orange. It was no doubt a long wait after his initial hire in December of 2019. 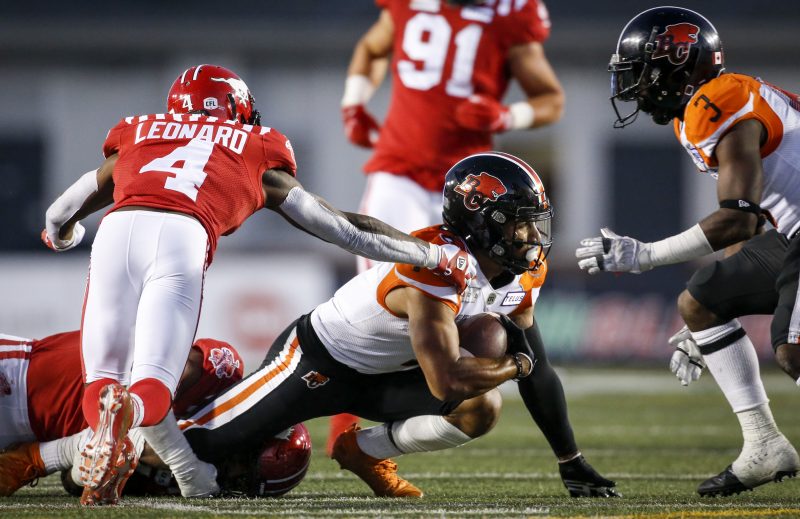 439- The total offence for the Lions in this one. Would they have loved to come away with more than one touchdown? No doubt. But seeing the defence respond was huge.

7- The total number of Lions who caught at least one pass. Reilly was picking and choosing his targets. Whitehead led the way with six catches.

4- As mentioned, the number of interceptions the Lions recorded against Bo Levi Mitchell.

“A win is great, right? That’s the only thing that matters. I thought our defence played phenomenal tonight, of course. They had a great game and that’s no small feat against Bo. I’ve played a ton of football against Bo. He’s a great player and they’ve got some young guys on that Calgary team and they’re going to be a very strong team as they always are. To be able to come in here and get a win, that’s big. Those are two tough road games. Certainly, we would have like to have been 2-0 at this point but 1-1 is better than 0-2.” Reilly on the victory.

The club’s 67th home opener is set for next Thursday, August 19th against the Edmonton Elks. Kickoff is 7:00 pm at BC Place.