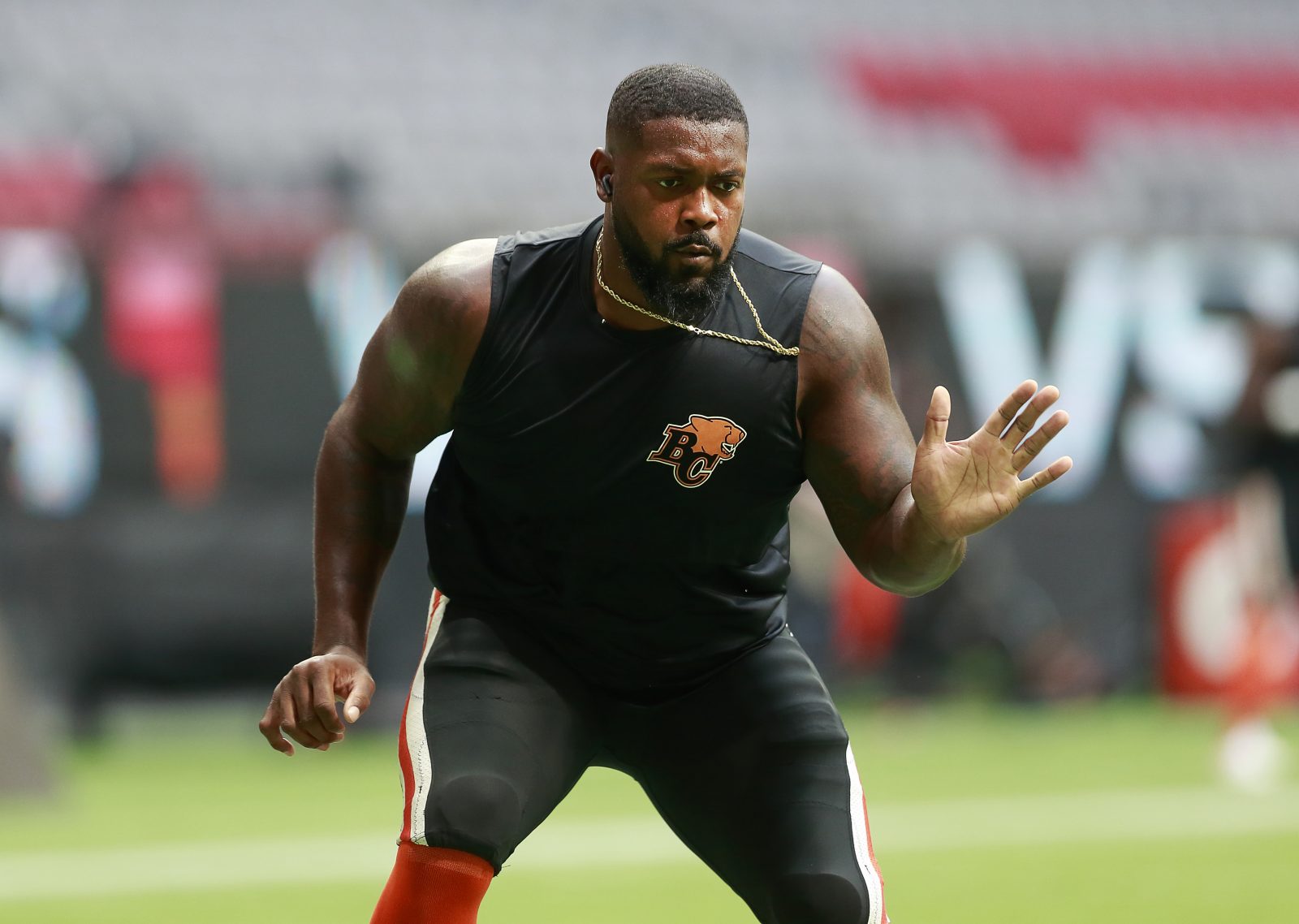 He comes from Dallas, Texas. Lions’ offensive lineman Kent Perkins is now looking for soul food recommendations in Vancouver — serious inquiries only because the big man needs to eat.

“The food is different here. I like soul food, you know like sweet potatoes, mac ‘n’ cheese. But I’m enjoying being around different people in the Canadian culture because it’s my first time,” Perkins said.

Besides the food situation, the 6’5’’ 305 lb right tackle is extra focused to be making his fourth consecutive start this Saturday against the Ottawa REDBLACKS in replace of Ryker Mathews, who’s still recovering from a concussion suffered from week 1 at Mosaic Stadium.

Perkins made his CFL debut the next week against the Calgary Stampeders. He was the next guy up when the club knew Mathews would miss some time.

During his first series of the Calgary game, Perkins was thrilled to be going up against CFL veteran Shawn Lemon after a long-awaited offseason. But Perkins said being able to pancake opposing players is pure joy for an offensive lineman.

“It was my first game played in a long time and then the adrenaline just went through my body. It’s been forever since I felt something like that. Then I got another pancake in the third quarter. It was a block on the defensive tackle, it just felt good,” he recalled. 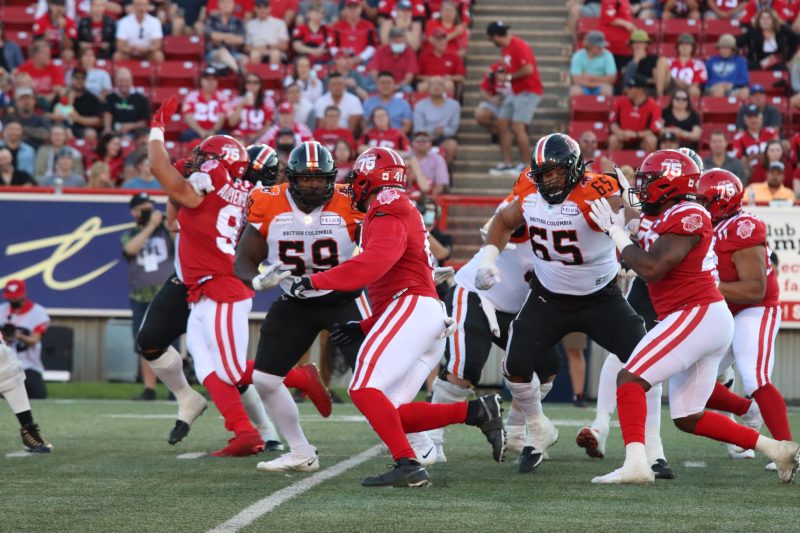 To be able to play in orange and black is like a rebirth for Perkins. He came out of retirement from the NFL to join the XFL for the St. Louis BattleHawks last year, but the league folded shortly after in April 2020.

“It was something really hard to deal with. But because I love football. I train, I kept in shape in the weight room and I’m a spiritual man. I had faith and I just kept working. I focused on what I can control,” he recalled.

Perkins signed with the club in December 2020. The former Texas Longhorn has experience at right guard and now he has been lining up next to teammate Sukh Chungh at right tackle.

“My favourite position is left tackle, but I know you got to be able to bounce on both sides.”

“I’m grateful. I’m beyond grateful. I try to practice gratitude because every morning I wake up I tell myself I’m blessed to be able to play this game. Because not having it for two years really lets you know like this is something special. Not a lot of people get that chance to play this game on the big stage. It just makes me cherish a lot more,” he added.

After a bye week, the Lions will set to face the REDBLACKS again. So far, the Lions are averaging 21 points per game, ranking the club third in the league. And the rushing attack hopes to find its rhythm to keep the offence on the field longer. The Lions are only averaging 71.5 rushing yards per game, just slightly above Ottawa out of the entire league.

Perkins said that last game in Ottawa, he could’ve been more physical and ran to the ball more. Now two sides are familiar with each other, Perkins utilizes all his time to work on techniques and the fundamentals.

“I have really high expectations, so I hold the bar super high. If we get better, then we’re going to do what we need to do on the field, not so much what Ottawa is doing. They may know our tendencies and I’ve been working on different techniques,” he added.

To prepare for gameday, Perkins emphasizes the group players and staff he’s surround by daily. Especially going up against fellow defensive end Obum Guacham every day at practices to keep him mentally sharp.

“We compete. He’s a great athlete and I love going against him because he’s going to make me better,” Perkins said.

“Everybody on the team is really cool. I like the coaches. I like Kelly Bates, he’s really funny and a nice guy.” 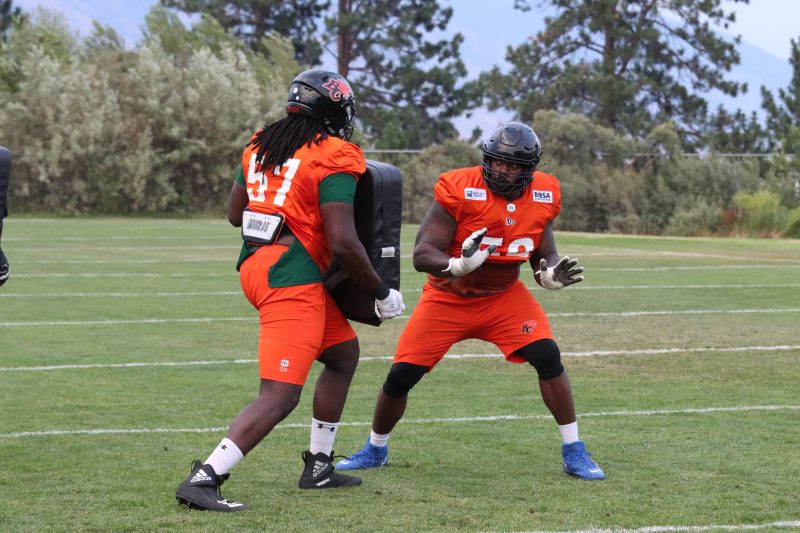 While Perkins and the offensive line are holding down the forefront on the line of scrimmage, the hulking lineman looks forward to playing in the cold soon.

Being from Texas, he thinks all the long sleeves he owns will come in handy in a few months.

As this season will go on in an unordinary fashion and take us all the way into December, all Perkins can do is take advantage of all the playing time and practice reps he’s been getting.

“I’m just going to focus on getting better every day. I wish we did have more games, but it is what it is. These last 10 games, just putting my best film that I can and put my team in the best position.”

And if he’s patient, the soul food will also come.