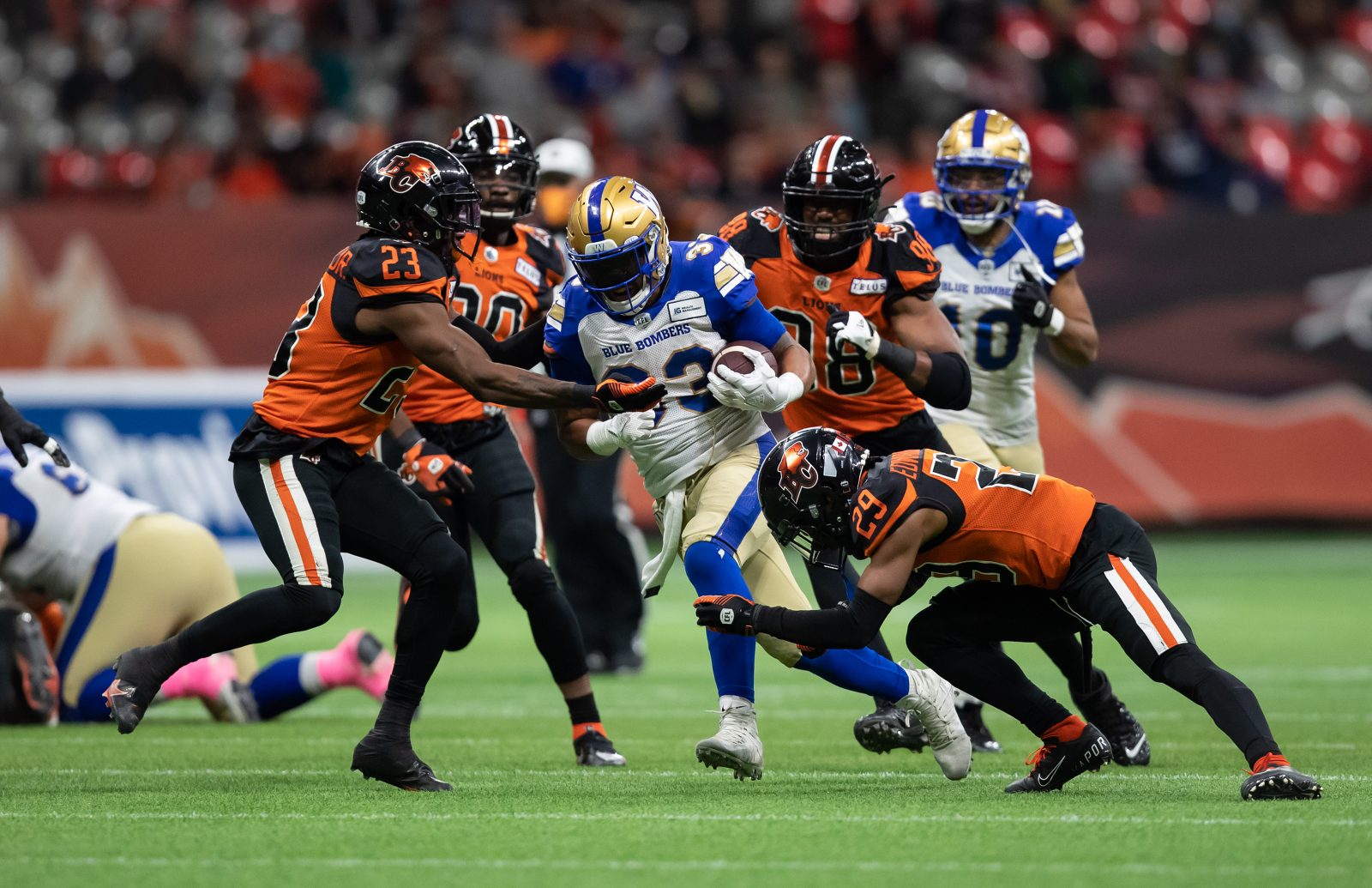 Winnipeg Blue Bombers' Andrew Harris, centre, is tackled by B.C. Lions' Anthony Thompson (23) and Jalon Edwards-Cooper (29) during the first half of a CFL football game in Vancouver, on Friday, October 1, 2021. THE CANADIAN PRESS/Darryl Dyck

Simply put, the Winnipeg Blue Bombers proved why they remain the class of the CFL after walking out of BC Place with a convincing 30-9 win over the 4-4 Lions on Friday night. The Bombers, (7-1) used the ground and pound game and deep ball to their advantage and the result was a fifth straight win for the defending Grey Cup champs.

Now for some Game Takes from Matt Baker following a Blue Bombers win on Friday night.

Balanced Bombers Too Much To Handle

Zach Collaros passed for a career-high 417 yards with 205 of those going to Kenny Lawler, which was also good for a career-best. Collaros threw touchdown strikes to both Lawler and Rasheed Bailey while the Lions were held to just nine points on three Jimmy Camacho field goals.

If they weren’t throwing deep, they were pounding the rock with Andrew Harris who finished with 81 yards on 14 carries. We talked in our pre-game Vs. feature with Giulio Caravatta about just how important the line of scrimmage battle was going to be and the visitors prevailed on both sides.

The Lions once again struggled to establish a ground game, finishing with a total of just 16 yards on the ground. Head coach Rick Campbell admitted the run game would be a “bye week project” they would have to work on.

Came in the second quarter after the Lions pinned Winnipeg back at their own five-yard line with the score 10-3 for the visitors. On the second play of that series, Tim Bonner’s offside gave the Bombers a fresh set of downs and they would proceed to march down the field for a 17-3 lead on Bailey’s touchdown catch.

It was the second time this season the Lions defence, as great as they’ve been, has allowed a 100-yard plus touchdown drive. The first game in a 21-16 loss to Edmonton in their August 19th home opener.

The Lions’ defence also forced a pair of Winnipeg turnovers but only managed three points as a result.

An Ode To Lucky

A scary moment in the early going when Lucky Whitehead left the game with a hand injury after a hit from Brandon Alexander. After initially being ruled out, the playmaker opted to return for the second half after getting an X-Ray. His lone target of the night was the play he got injured on and was ultimately called back after a Peter Godber holding penalty.

The man deserves credit for battling through. Perhaps the bye week comes at an opportune time for him to heal up for the remaining six games. Losing him long-term would no doubt be a huge blow for this offence.

510- the total offence for Winnipeg in this one.

12- Lawler’s reception total to go with his career-best yards total.

82- a team-high in receiving yards for Bryan Burnham.

The Lions now head into their second and final bye week of the regular season before wrapping up the homestand with a tilt against the Calgary Stampeders on Saturday, October 16th at 4:00 pm. Tickets can be purchased HERE.