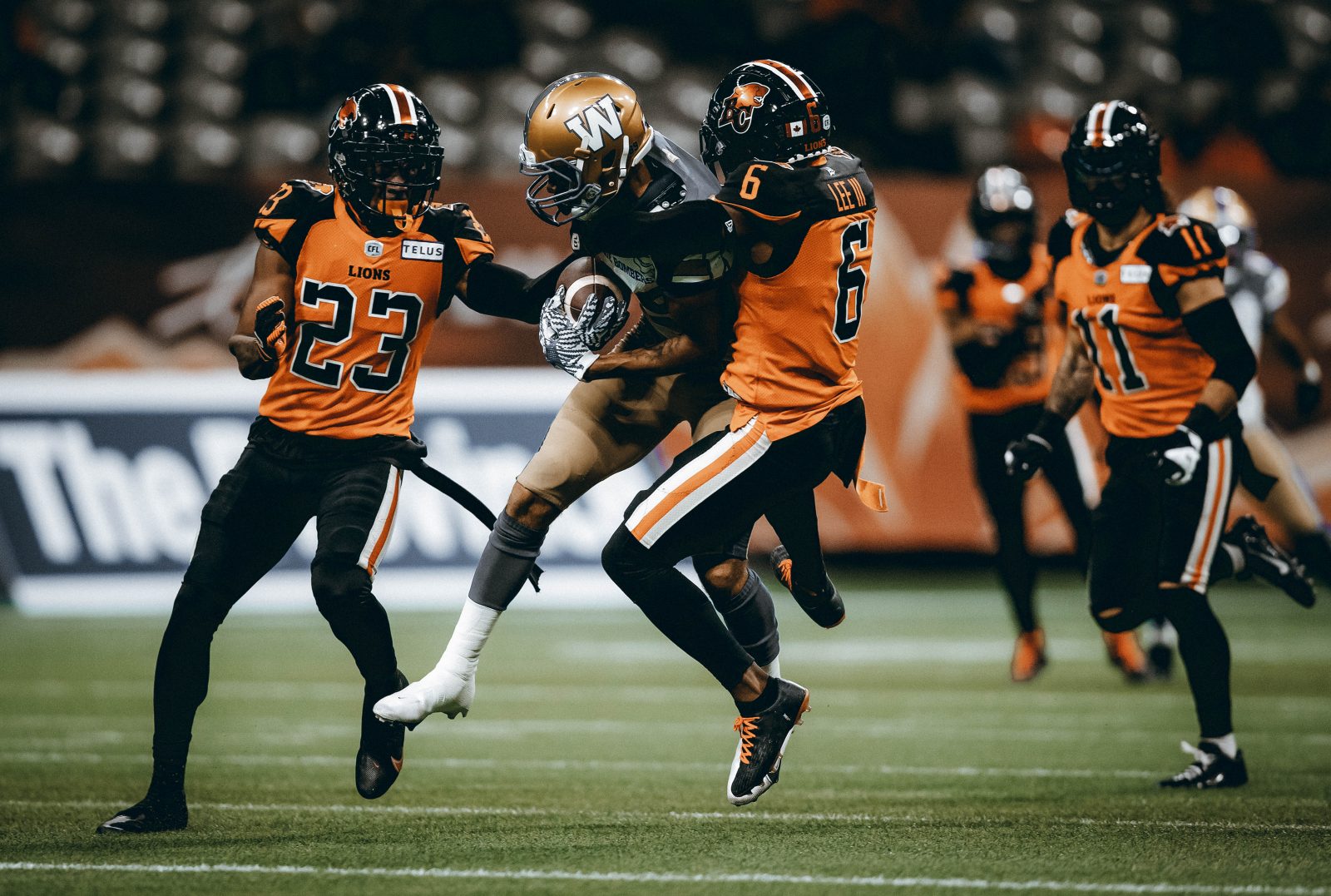 Winnipeg Blue Bombers' Kenny Lawler, second left, is tackled by B.C. Lions' T.J. Lee (6) and Anthony Thompson (23) after making a reception during the first half of a CFL football game in Vancouver, on Friday, October 1, 2021. THE CANADIAN PRESS/Darryl Dyck

It will either go down as a journey that turned this 2021 ship around or a potential dagger in what once looked like a promising campaign. Rick Campbell and the BC Lions (4-5-0) begin a stretch of three straight road contests against the Winnipeg Blue Bombers (9-1-0) on Saturday in the Manitoba capital (4 PM, AM730, TSN, ESPN+). It’s the start of a big three-game stretch away from home that will also take them to Toronto and Hamilton in the following weeks.

After dropping three straight at BC Place, including a discouraging 30-9 result to these league-leading Bombers on October 1, the Lions all of a sudden find themselves below the playoff bar; two points back of Calgary for third in the West and even with the Tiger-Cats for third in the East and a possible crossover spot. No need to panic with five games left reminds the head coach.

“We’ve got to learn from what’s happened over the last few weeks but we’ve definitely got to keep moving forward, ” said Campbell this week.

“There’s a lot of football left, everybody is in the middle of the pack except the bottom two teams and Winnipeg so we’re right in the mix of this whole thing and we’ve got to keep plugging away and fighting.”

Top receiver Lucky Whitehead will miss at least one more game as he recovers from hand surgery. The good news is, the squad will get some more veteran help at the receiver position as DeVier Posey makes his 2021 debut after returning to the team on October 8th. With two weeks of practice under his belt, Posey is ready to do what he did in 2018: help the team make a push for a return to the playoffs.

“Words really can’t really describe it,” said Posey who has undergone a whirlwind after beginning the season on Hamilton’s six-game injured list.

“It’s been a tough year as far as getting going. I’m happy to be back out here in Surrey with BC. I enjoyed my time in ’18 and I’m ready to help the guys out. Any time you get the chance to play with Mike Reilly, Bryan Burnham, Fig, Hunter, of course, Lemar and the receiving group that we have, I’m just taking it with a grain of salt and trying to put my best foot forward.

I don’t really think every year is the same. This year is a bit different and we have a bit of a different road. The season is a bit changed up because of the 14 games, but we’re just trying to finish strong in this tight Western Division right now.” 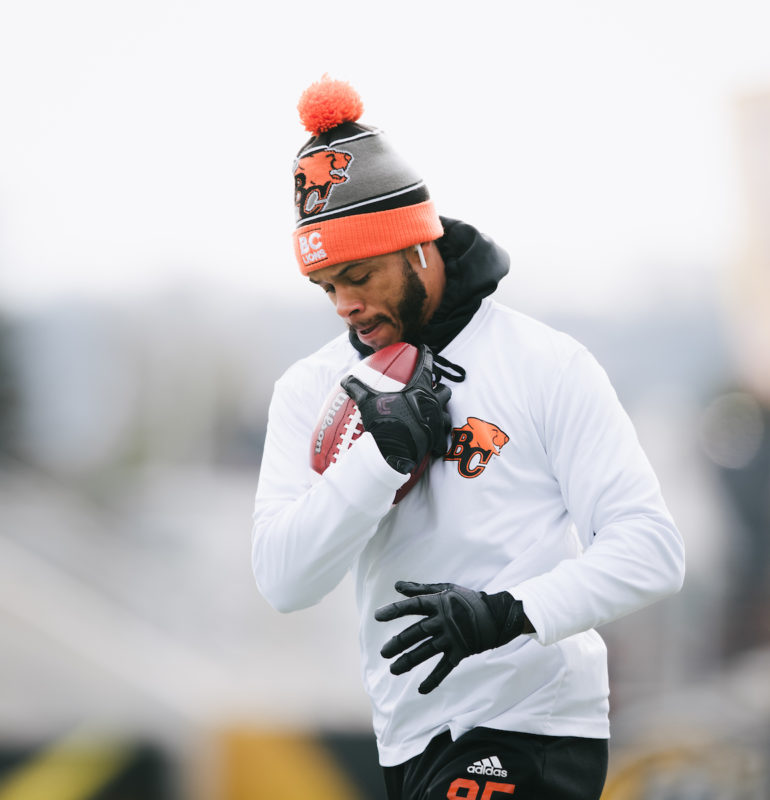 The Bombers are still rolling after taking down the Edmonton Elks twice since their impressive showing at BC Place three weeks ago. Those wins over Edmonton were by a combined total of 37 points. With a win this week, Zach Collaros and company would also lock up first place in the West and home field for the Division Final on December 5th.

They will be without Andrew Harris in the backfield after the 2011 Grey Cup Most Valuable Canadian injured his knee in the first half of last week’s game against the Elks. Brady Oliveira will get the call in the backfield. The local product has two 100-plus games this season, including last week after Harris went down. It will no doubt be another huge test for the Lions on both sides of the line of scrimmage.

Going into a ramped-up environment in Winnipeg will also present a nice challenge. It’s worth a reminder the Lions hold a 3-1-0 record away from home.

“They have good fans, it’s a neat stadium, a new stadium, but I know our guys like it, ” Campbell said of visiting Winnipeg.

“They’ve liked playing on the road this year and I give our guys credit for that. I think they’re going to be excited about going into hostile territory and putting our best foot forward.” 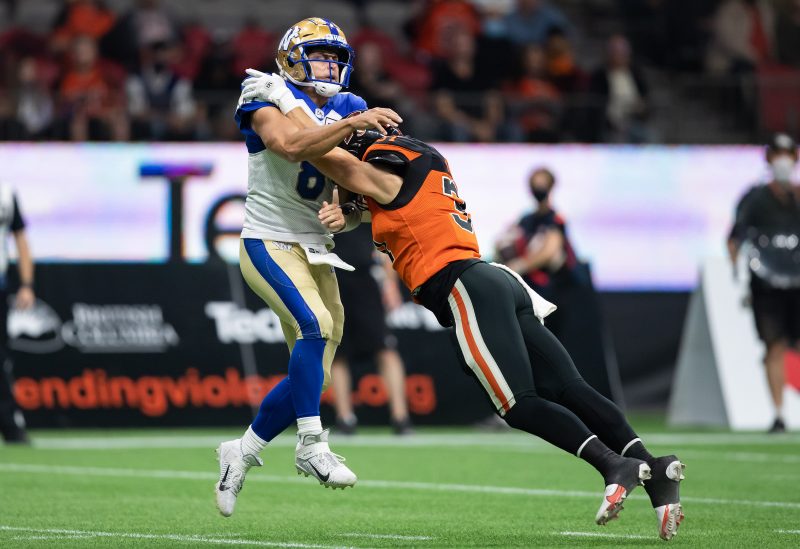