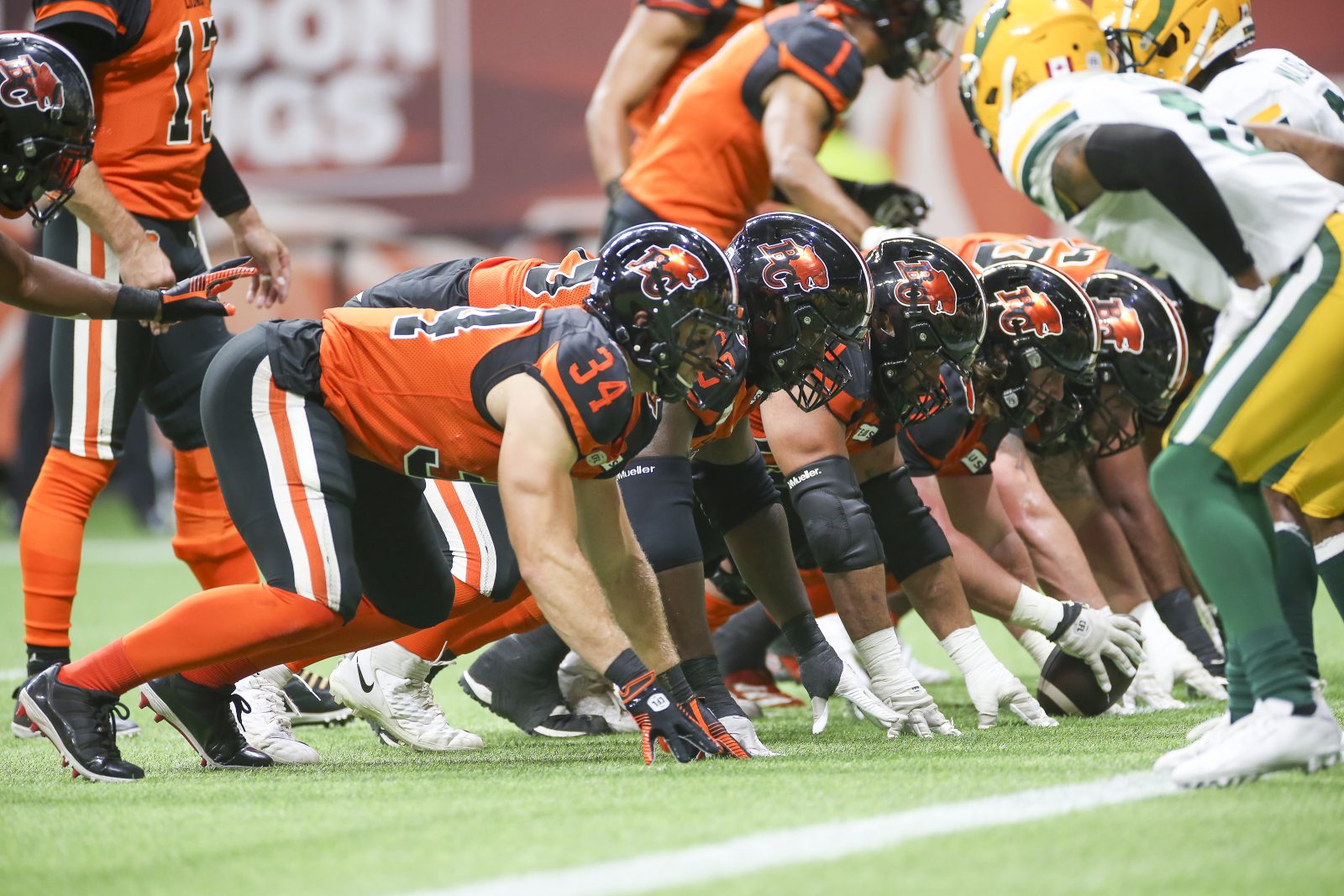 A few Ontario natives on this Lions team will make this away trip out East extra meaningful as the squad wraps up their 2021 regular season road slate. It’s where everything started for them like family, friends and football. At this point of the season where the games are all the more crucial, home cookin’ could serve as the motivation they need ahead of contests in Toronto in Hamilton.

Fullback David Mackie hails from Jackson’s Point, a harbour town on Lake Simcoe roughly an hour north of Toronto and only has a few opportunities to play in front of close ones since he started playing for the Lions in 2018.

“They’ve [family] been my biggest support since I started playing football with my dad and mom, my siblings, fiancé and all the boys that I played college ball with that have now moved on from football. They’re still incredibly supportive,” Mackie said.

The former Western Mustang takes pride in being one of the few who’s still making plays since that 2017 squad that stunned the Laval Rouge et Or in the Vanier Cup.

“Those old moments and coach Rick [Campbell] even talked about it. No matter what level of football you play, you don’t just talk about the games but it’s the time and experiences that you had with your ex-teammates,” he said.

“All my buddies at Western when we won the national championship, we will always have something together. Just because they’re not playing anymore, doesn’t mean they haven’t been supportive. They’re more than happy about what I’m doing and got to move on to the next level. Every single game they’re at, they’re rocking a Mackie jersey no matter how hostile the environment is.” 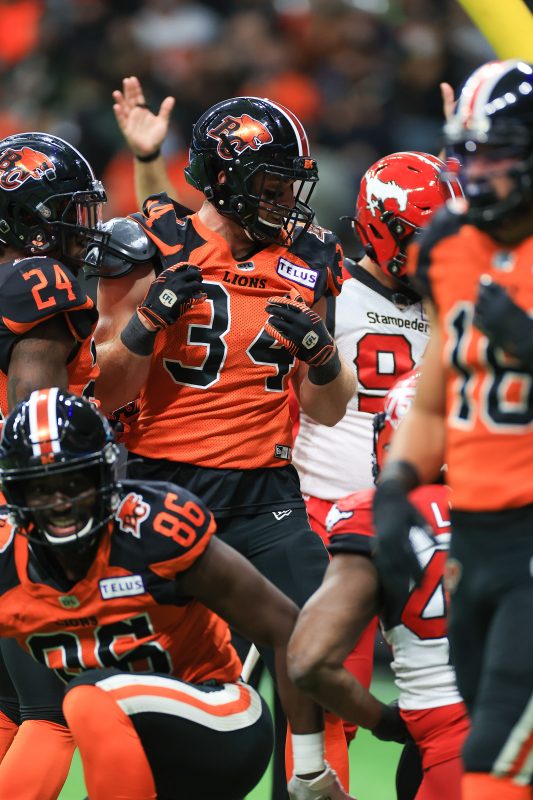 The third-year Lions fullback is all over the field on the offence and special teams. Mackie says the modern-day fullback requires to be versatile as many offences today have shifted to a spread offence to utilize the entire field.

“I’m fortunate to be a part of an offence that still trust that position. It’s a position that’s changed but if you’re good enough at your job, you’re going to find ways to get on the field. It doesn’t matter whether if it’s blocking, running or catching or whatever it may be,” Mackie said.

“I’m a little biased but I think fullback is a cool position because it adds to the scheme of a play. You can change what your looks are for defences and I think fullback is a position that everyone sees as a cultural builder. We’re typically hard-nosed guys that work hard and I kind of wear that with pride in being one of those guys.”

In just a few seasons, Mackie has emerged as a leader on this Lions team in 2021. He still remembered his rookie season when he didn’t care about the number he was wearing other than contributing for the team.

To be able to take on a leadership role in 2021, Mackie says it’s always a position that he falls into throughout his football career.

“It just kind of happens naturally. You don’t want to over-try to be a leader and step into a position like that. It’s cool to reflect on these couple of years and grow into the role I’m at and have a great relationship with the coaching staff and the staff in this building,” he added.

Another Lion who’s grateful to return to Ontario for a little home cookin’ is centre Peter Godber. Since being was drafted by the Lions in 2018, he has yet to play in his hometown of Toronto due to injuries.

“I’m excited. It’s the first time I’ll be playing a football game in Toronto since I graduated high school in 2013. Our last game was in 2012 so it’s been almost 10 years since I played there. And it’s where I grew up, it’s going to be good to see my family and friends come to the game,” Godber said.

The Rice University product chose the division one route after attending Northern Secondary School for one year and then transferred to St. Andrew’s College for the following three years before strapping on the pads for the Owls. 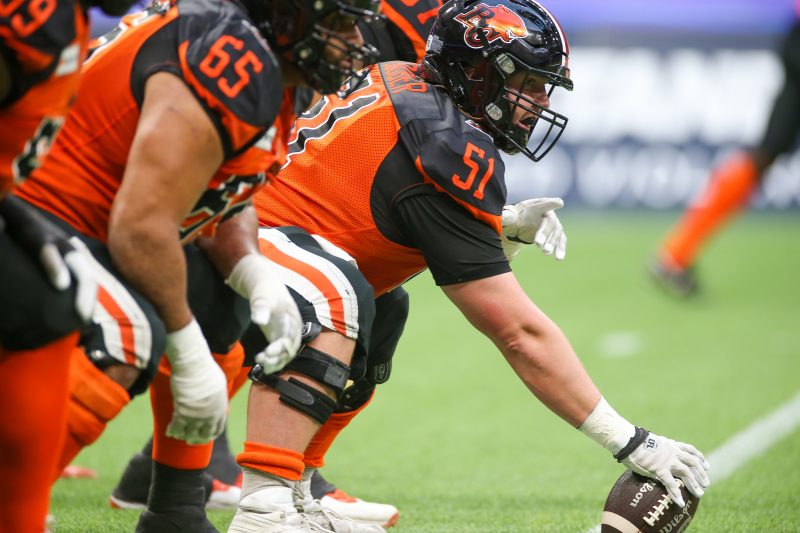 It’ll be a full-circle moment for Godber when he returns home this week because ever since his amateur football days leading up to representing Ontario in Canada Cup, he has played at various major venues in Toronto such as the Rogers Centre — the Argos’ previous home. He also played against a few current Lions teammates including Mackie and David Knevel.

Godber appeared in nine games in his rookie season but went down with a leg injury that took the majority of the 2019 season to rehab. Although he only suited up in the final game of the 2019 regular season, he has emerged as a starter that he was expected to since he was drafted. Now his goal is to put his head down and finish the season strong.

“We missed the year because of COVID and then the year before that I was on injury reserve most of the season. I haven’t been playing a lot of football games. To be finally back and staying healthy with my teammates, be with the guys and train in the offseason, who we all care about this team. It’s been great,” Godber said.

“Obviously, none of us is satisfied or happy with the last stretch, we have to move forward and put some better stuff on film,” he added.

Home cookin’ will be key for a big finish.