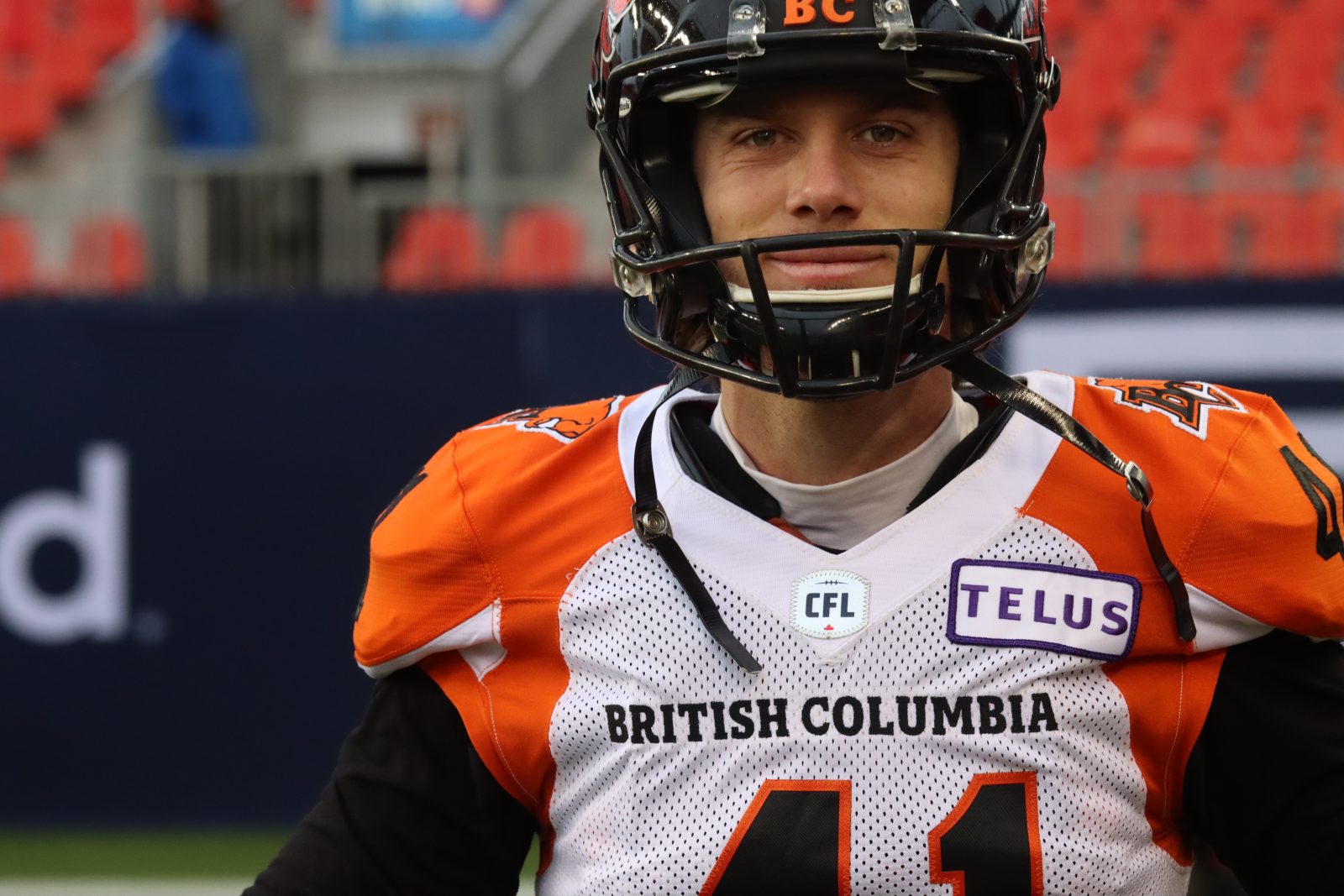 Hamilton, ON- One thing punter Stefan Flintoft has learned over this season up north is that the weather conditions in the CFL are unpredictable. From having the privilege to punt in an indoor venue like BC Place to practicing at Surrey where it has been pouring rain for the last few weeks, all of those reps are setting him up for the tough road games.

The product out of Santa Monica, California currently has the best punting average in the CFL at 48.8 yards, although the net average (38), where the return yards are factored in isn’t up to his standard, yet.

“I usually get a text from my dad after each game asking me if I know the numbers. But at the end of the day, my opinion over each individual punt, like how it felt, the outcome of the punt is more important,” Flintoft said.

“The net average is the only number I care about. I’m definitely making adjustments and have some improvements in mind to get that net as high as we can before the year is over.”

Different weather conditions require him to make slight adjustments to every punt. This is why Flintoft is quite passionate about techniques such as the drop point of the ball and the spin of the ball during each punt.

“The drop is the most important because it’s not like a field goal where the ball is on the ground. There’s airtime and especially up here with some of these conditions, you have to make adjustments for the wind and rain and all of that stuff,” he said.

Although all punters have slightly different techniques it all comes down to the inevitable of repetitions days in and out — the boring stuff that Flintoft refers to which eventually makes him fall in love with the process when he starts seeing results.

“The drop at the end is going to make or break you. The only way to perfect it is just repetitions. We punt around 11 times at practice, but I’m doing an average of probably over a hundred drops per day. That’s just a part of being a professional,” he added.

“Drills are not fun to do in the beginning, then they get very addicting because the more you do it, the better the results you start seeing. I know no matter what, I have to get this many done because it is that important. It’s what’s going to make or break you.” 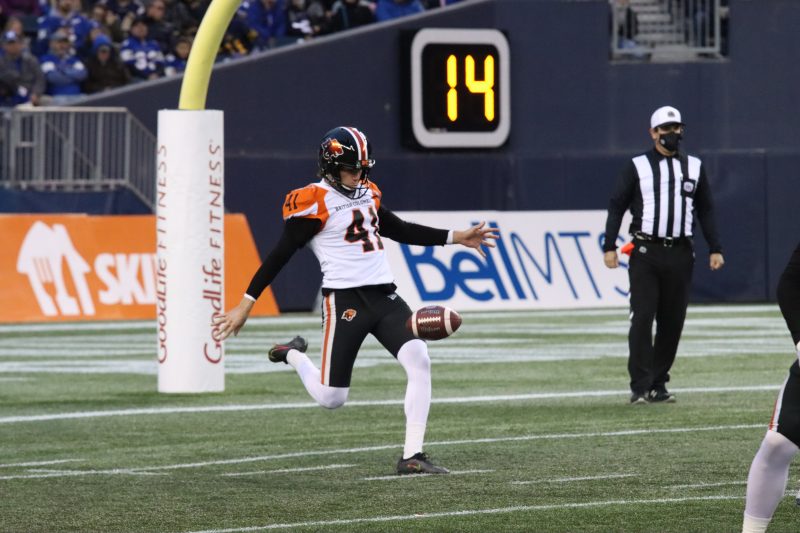 All those reps are also helping him to create the best spin on the ball possible. Especially practicing in the rain at Surrey which is supposed to prep the team for an environment like BMO Field last weekend where the weather would play a factor in a game.

“If you’re kicking into the wind, you want that perfect spiral because it’s going to cut through the wind more,” Flintoft said.

And a golf enthusiast like himself said the similarities of golf to punting are uncanny.

Golf also puts him in a spot where he can relax and think about punting in football at the same time.

“It keeps you in that mindset while you’re also kind of getting away from certain things. I mean, it’s just a great sport to play with a group. Get competitive, keep the competitive juice flowing,” he said.

In the offseason, Flintoft works out and is close with punter Ty Long, the current Los Angeles Charger who suited up for the Lions from 2017 to 2018, and Ottawa REDBLACKS’ Richie Leone; another former Lion who currently leads the CFL with 4,267 punting yards and 41.4 net average.

Their connection started with Flintoft’s coach who referred him to Long’s coach in preparation for his college pro day. Ever since then, Flintoft, Long and Leone have been training and coaching for Mike McCabe – One On One Kicking academy.

“Between the two, they taught me the ins and outs of the CFL. The rule differences and different types of punts, what’s effective in different conditions. If it wasn’t for them, I wouldn’t be ready for the CFL,” Flintoft said. 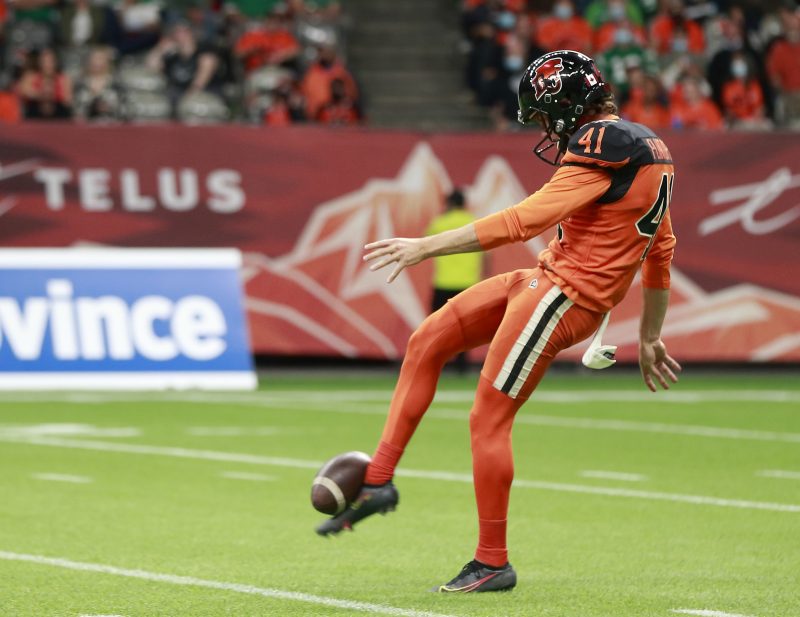 He was signed by the Lions in January 2020. Although it took some transition period just to be back in football routine again, Flintoft was quickly activated to the active roster for the first home game against the Edmonton Elks. A solid kicking performance from the punter led to a major confidence boost for himself and the rest of the locker room.

“Since then, I’ve been riding on that, just not getting satisfied, just chasing that perfect game in my mind. Just trying to kick the best punt and give the best field position for our team. I’m very close with our D-Line, I like setting them up with a pretty big field,” he said.

While the Lions setting up to finish their two-game road trip in Hamilton, this upcoming game against the Tiger-Cats will determine if there would be a chance of a crossover in the playoffs and also an opportunity for the Lions to keep their playoff hopes alive.

“I’m excited about the next three games. I want to keep playing. I don’t want the season to end.”