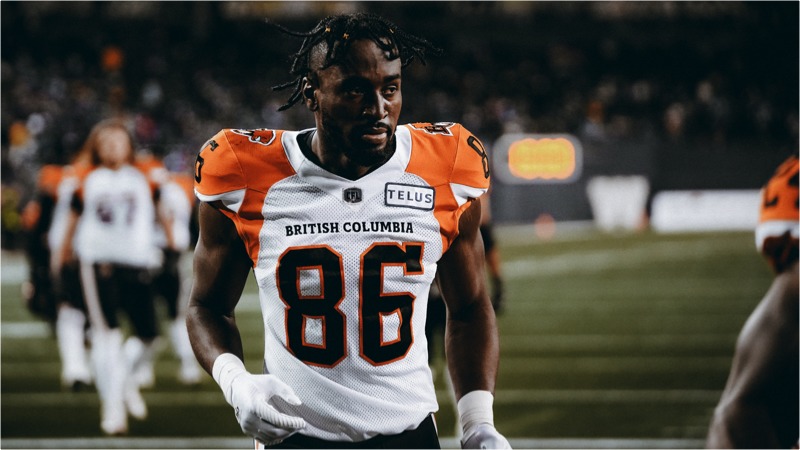 In a shortened 2021 season, Lions second-year receiver Jevon Cottoy built on where he left off in 2019. After a standout rookie year, he continues to progress on the field.  Cottoy’s big physical 6’5’’ body frame can truck through and hurdle over the defenders when the ball is in his hands, making him a dangerous weapon on this Lion’s receiving core. On top of being a well-trusted target, Cottoy’s ability to clutch up when the team needs somebody to make a game-changing play has a few more highlight reels to show off. Here are the top five plays of Cottoy in 2021.

After a quiet first quarter from both sides, the Lions got outscored by the Tiger-Cats in the second quarter. From then on, the Lions were playing from behind for the rest of the game. But a few sparks in the second half led by running back, James Butler’s eight-yard score and Michael Reilly, who dove for the goal line with the help from the rest of the offence made the eight-point deficit possible with 1:18 remaining in the game.

When teams prepare themselves for an onside kick, they all have one hope in their mind— to get the football back. Special teams coach Don Yanowsky and the unit had been practicing onside kicks all season. This particular kick was placed perfectly to put Hamilton’s Jaelon Acklin on an island. With Acklin being isolated and trying to field the football, Cottoy had a clear path towards him while the ball was still hanging in the air. This was followed by a big hit from Cottoy to knock the ball loose. Unfortunately, after officials’ review, Hamilton retained possession as the ball rolled out of bounds. But the big receiver showed off his versatility on the special teams as well.

Coming off the team’s first bye week back in September, the Lions were looking to close sweep a de facto home and home series with the REDBLACKS. A ton of explosive plays from the offence and defence in a dominant 45-13 victory. It was the type of football that Lions fans wanted to see all season long — a lot of firepower from the offence and pressure from the defence.

The offence capitalized their first three drives of the game that all ended with a touchdown. Wide receiver Keon Hatcher scored his first major in the CFL on his 27th birthday — an eight-yard toss from Michael Reilly. Cottoy helped move the sticks on that first drive with two catches for 26 yards and the hot hands resumed once the offence got the ball back, which led to a 38-yard strike from Reilly to Cottoy. It was a night Ottawa’s defence would like to forget about as Reilly was getting all the receivers involved in the passing game.

The Lions’ second drive began with two straight completions to Bryan Burnham and one to Shaq Johnson. The Reilly and Cottoy connection seemed to be an unstoppable force for Ottawa’s defence on that day. When Reilly decided to chuck one down the field, it was certain that Cottoy was going to come down with the football. And he brushed off the opposing defender and easily took it to the house.

It’s probably not new to see Cottoy trying to fend off several defenders. But the 6’5’’ 230-pound receiver has hops as well. In a game where the team struggled to generate momentum, Cottoy found a way to get open and hype the team up in a hostile environment at Tim Hortons Field. Although he finished the game with two receptions for 28 yards, the hurdle over Jumal Rolle gave Lions fans something to cheer about while playing from behind. Plays like this can be contagious. Because the week after, playing against the Stampeders at home, teammate Shaq Johnson pulled the same move of leaping over a Calgary defender to move the sticks.

A post shared by BC Lions Football Club (@bclions_official)

2) Diving for the pylon at BC Place

There are a lot of exciting playmakers on the 2021 Lions’ receiving group: Lucky Whitehead with the breakout season, Bryan Burnham being Bryan Burnham, Dominique Rhymes emerged after coming off the six-game injury list. And Cottoy showing that his rookie of the year nomination from the club in 2019 was no fluke.

After a disappointing Ontario road trip that added two more defeats into the club’s loss column, the final meeting against the Stampeders was the very last hope to keep the club’s season alive. Cottoy once again proved that he’s a valuable target on the offence. The Lions needed to score in the fourth quarter to make it to a three-point game. Cottoy didn’t let up when Reilly looked his way. He dodged two Calgary defenders and reached for the pylon. The Lions did close the gap to 26-23 but the Calgary side was too much to handle and closed out the game with a 33-23 win over the Lions to clinch their playoffs berth.

1) First TD of the season in sloppy weather

Following Dominique Rhymes’ injury during the first series of the game in Ottawa, Cottoy stepped up immediately. While he didn’t record any catches in the first three games of the season, Cottoy stole the show against the REDBLACKS. The rain played a factor throughout the game and both teams exchanged field goals back and forth. Ottawa’s placekicker Lewis Ward kept the REDBLACKS in the game when he drilled through a 38-yard field goal to make the score 15-12 for the Lions. Cottoy and Reilly ensured Ottawa couldn’t complete a comeback.

Reilly’s 46-yard touchdown to Cottoy provided more cushion to the Lions’ lead and kept the REDBLACKS scoreless in the fourth quarter. Cottoy’s first touchdown in 2021 sealed the game for the Lions to improve to 2-2. Cottoy finished the 2021 season with 39 receptions for 519 yards and three touchdowns. He was a bright spot for the club this season with a whole lot of upsides in the near future.

We can’t wait to see what Jevon has in store for year three. Stay tuned for more top fives from some key Lions 2021 contributers!