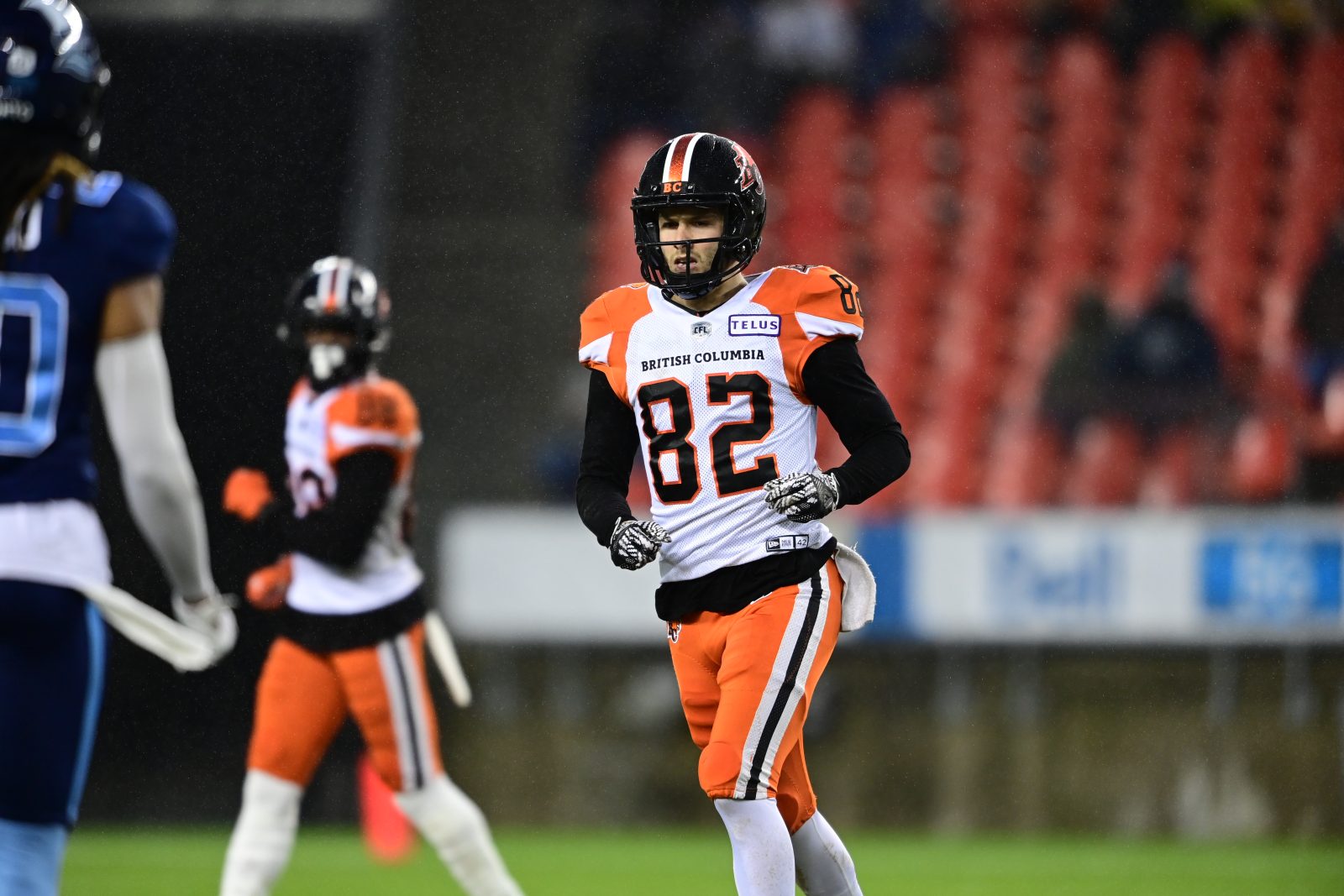 As the offseason frenzy really gets underway, some of the Lions who will be returning are already putting in the work for 2022 to bounce back from an up and down 2021 campaign.

Although it is still January, the squad has already brought back some valuable targets for the quarterbacks like 2021 MOP candidate Lucky Whitehead and Dominique Rhymes, who still managed to collect 411 receiving yards and one touchdown despite missing a chunk of the season with an ankle injury.

One player in particular who is eager to make this upcoming season his best yet is Canadian wide receiver Jacob Scarfone. The former University of Guelph standout caught his first career CFL touchdown in an overtime loss at Toronto at the end of October, a contest to remember for some crazy late-game shenanigans.

When the opposing defence tried to seal off guys with the hot hands like Bryan Burnham or Rhymes, who already hauled in a score each earlier in the game, Michael Reilly looked towards Scarfone who was wide open underneath. Then the red sea just opened up for Scarfone to make a crucial play.

“You don’t get to go to overtime every game. They kind of dropped me on the play and rushed towards Burnham on that play. I got free and just tried to get north-south. There wasn’t anyone really close to making a play on me and the next thing you know I was in the end zone,” Scarfone recalled. 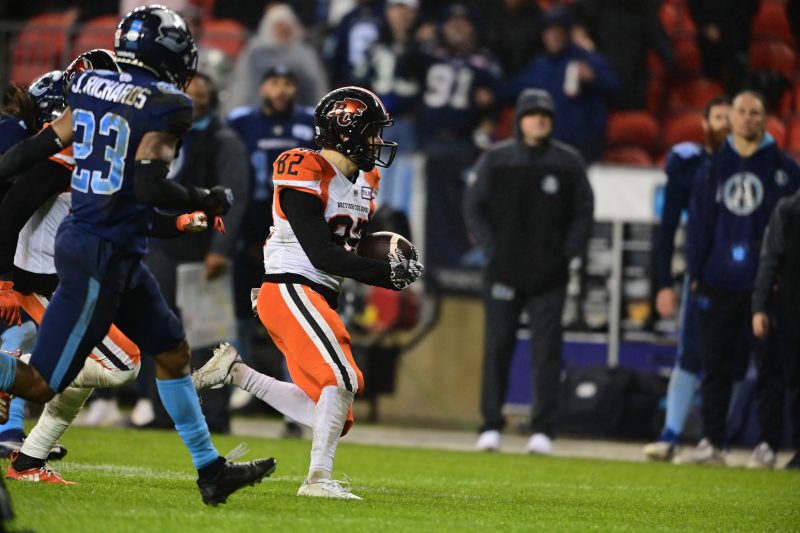 Scarfone showed off his instinct and speed to provide much-needed help for the team in a game that went down to the wire (31-29). Although the Argos came out on top, it was a long-awaited moment for him.

Having gone through his second ACL rehab before joining the Lions for the 2021 season, he spent two seasons with the Ottawa REDBLACKS in 2018 and 2019.

“It was my only choice. When Rick [Campbell] called, I just jumped at the opportunity to get back,” Scarfone recalled.

Then he was on his way to reunite several teammates from Ottawa like Rhymes, J.R. Tavai and Anthony Cioffi.

And with the calibre of receiving core the Lions had in 2021, Scarfone still earned the trust of his quarterbacks as well.

“Michael [Reilly] had that issue with his arm, so there wasn’t a lot of reps to go around in training camp with him. My reps with Michael were super limited. But it was solid. I would have liked to connect a few more times with Michael based on the targets I had, that’s just how it goes sometimes,” Scarfone said.

While Reilly was dealing with his throwing elbow throughout the season, Scarfone received many practice reps from Canadian quarterback Nathan Rourke. Those who attend Lions practice regularly would know the two would stay after practices to get more reps in along with the special teams.

“We were always getting the actual reps in after practice because we wouldn’t get too many reps during practice,” Scarfone said.

With the club already bringing back some prominent Canadian players, it’s a no-brainer for Scarfone to return in orange and black to keep building on the chemistry with the returning players and coaching staff. Other Nationals who have re-signed so far include offensive linemen Sukh Chungh, David Knevel and Andrew Peirson plus defensive back Hakeem Johnson, linebacker Isaiah Guzylak-Messam plus long snapper Tanner Doll.

“To have that continuity with the coaching staff is really exciting, I’ve already had six offensive coordinators in my short time in the league. It’s nice to go into camp with the same coordinator and receiver’s coach. That’ll be a first for me,” he said.

“I think coach Campbell wants you to be your true self and he believes that you’ll bring the best out of you when you can just be yourself. Some coaches try to mould you a certain way and he doesn’t do that,” he added. 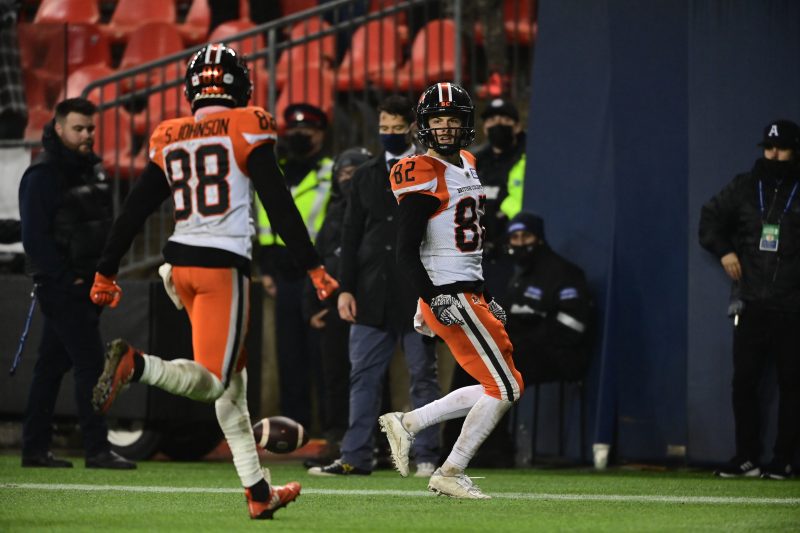 “Coach Tuck [Jason Tucker] is the same philosophy funny enough. He says he’ll never try to put you in a box, especially in route running. There are so many ways you can do one thing. He understands that to be your best as a receiver, you have to run routes the way that works the best for you.”

Rourke, the Victoria-born quarterback, will enter year two with far more experience after enduring all the ups and downs with the 2021 squad. And Scarfone will aim to give Rourke an additional confidence boost.

“It’s always great to throw with Nate. I’m staying in Vancouver in the offseason. So, I’ll be able to work with Nate because I think he’s going to stick around. It’ll be exciting to work with him in the offseason. And then being able to come into camp and have the same quarterback on your team really fires me up. I think it’s a good situation,” Scarfone said.

“As a team, I’d love to win the cup. That’s the goal every year. If you don’t do that, it’s not a successful year. Eight teams go home pissed at the end of the year. Personally, I would just like to contribute to whatever capacity that coaches would have me. Every player always wants to do more and help the team more.”