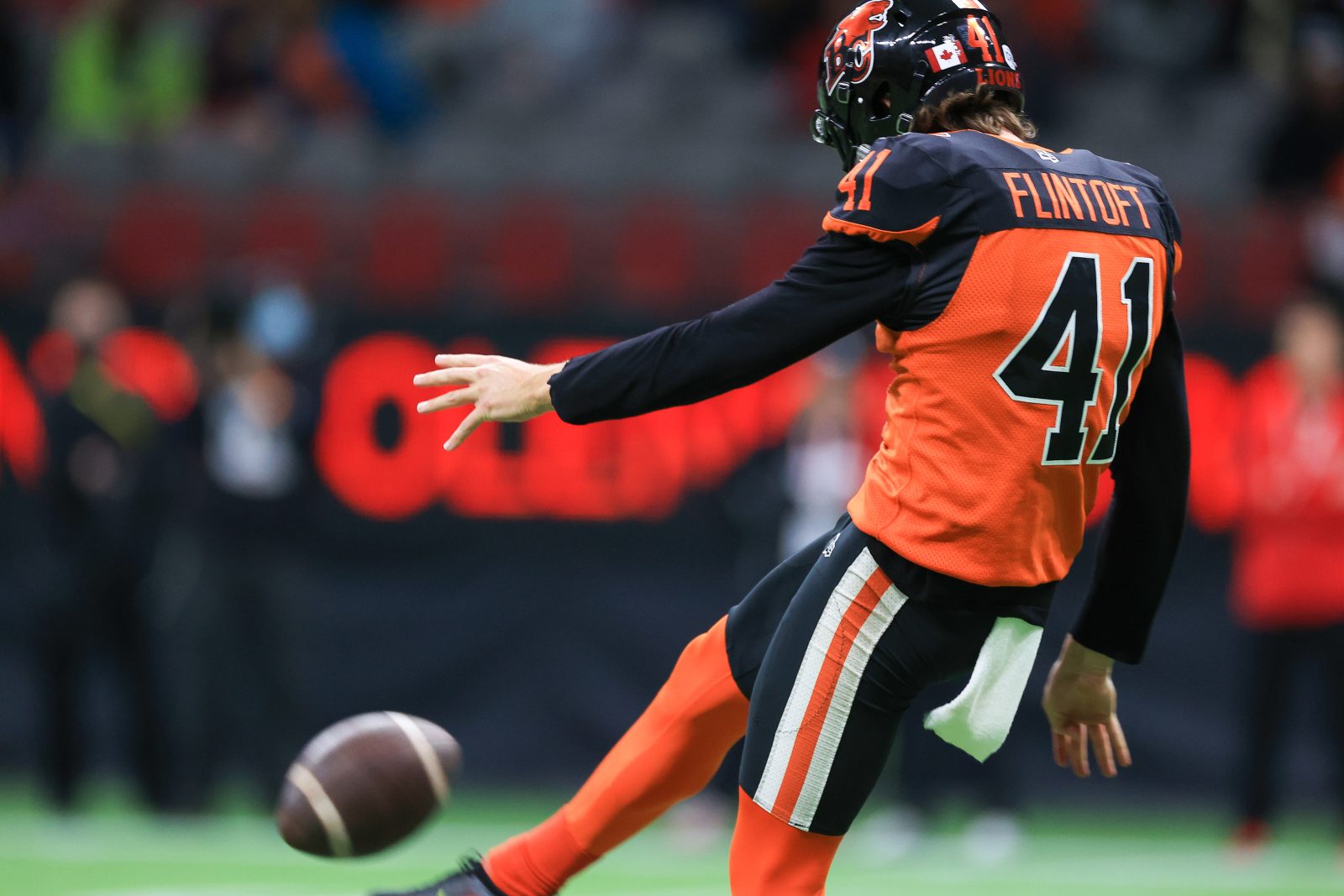 CFL BC Lions vs Calgary

Being able to wake up to California sunshine every day is a pleasure. But Lions punt specialist Stefan Flintoft knows he can’t stay too relaxed while the countdown to training camp is officially on. With less than 50 days until his second voyage to Kamloops, Flintoft will head up north once again to put Lions in great field position.

And he’ll pair up with veteran placekicker Sean Whyte in 2022 after the club signed the local kicker who’s entering his 13th season in the CFL. Last season, Flintoft led the league in punt average (47.8) and Whyte was second in the league in field goal percentage (87.5), just behind Calgary’s Rene Parades.

The second-year punter out of UCLA has a close connection with former Lions Richie Leone and Ty Long, dating back to way before he joined the CFL. And now that he’s more familiar with the league, he even has one of his Lions teammates planning his offseason training program. Here we present 5 Things To Know about Stefan Flintoft.

It’s no news that Lions captain David Mackie is a certified strength trainer, who has been building several offseason plans for players across the league, including his fellow fullback, Mario Villamizar and Winnipeg Blue Bombers kicker/punter Marc Liegghio, who played for the Western Mustangs with Mackie. Flintoft has hopped on the gains train with Mackie, but with more emphasis on maximizing his strength as a punter.

2. Stefan is a casual golfer

A while back, Stefan compared the similarities between golf and punting as being uncanny. Which is one of the reasons why he likes to head out to the golf course and take his mind away from football —but not completely. Flintoft was able to head out to the course twice a week with his dad and friends on most occasions. But the punt specialist has been trying to buckle down for the upcoming season because this past season was such a short turnaround from any other football season before.

“My handicap usually would be like low 80s. But right now, since I’m not playing consistently, I’m like the upper 80s. Nothing crazy, it’s only been like once or twice a month. My dad golfs three days a week, I usually just tag along with him and his golf buddies, and it’s a pretty entertaining round.”

While he’s solely focused on this upcoming season, Stefan is a stereotypical Californian. Whether it’s skiing, skateboarding or surfing, he can do it all. He said he may not be a Shaun White (of winter sports fame), but he’s been skiing since he was a toddler.

“I started skiing when I was one and a half. I was out of the ski school and onto the mountain when I was three or four. I was brought up that way and to have an older sister, my parents kind of went through the steps with her and then me,” he said.

“My family, relatives’ families, we had like 12 to 15 of us on a mountain. Outside of football, definitely skiing, snowboarding in the winter. I even did a little ski trip to Whistler when I was in high school with my buddies, we toured UBC just to check out some Canadian Universities.”

As a former UCLA Bruin, he said there is a certain expectation that the Bruins make it into the tournament every year. With so much history and so many professional prospects enrolling at a prestigious basketball program on both men’s and women’s sides, there is always a hope that the Bruins can win it all — or at least be the best team in the Pac-12 conference. Last Friday, Stefan talked about the tough matchup the Bruins were facing against another basketball powerhouse, the University of North Carolina Tar Heels.

“You don’t even know what would have happened in the first round, it can really go either way. We just have so much history there. Growing up, I have a John Wooden signed basketball that’s still in my room since I was like eight years old. It’s going to be a good one,” he said

The 8th seed Tar Heels edged out the 4th seed Bruins with the score of 73-66, where North Carolina outscored UCLA 45-35 in the second half and worked their way towards the Final Four showdown against long-time rival Duke University.

Stefan met Ty Long and Richie Leone a while back when he was preparing for his college pro-day. They worked with Mike McCabe from the One On One Kicking academy. This offseason, Stefan chose to stay in California and Leone stayed in Ottawa. While the trios were walking their own path this winter, Stefan said he’s been training with his buddy from high school and Las Vegas Raiders punter, A.J. Cole, who joined Stefan and his regular group for a few weeks.

“It’s been a much smaller group this year. There are pros and cons to having a smaller group of guys. But it’s been nice, especially for how quickly this offseason went by, it’s just good to have a more direct line of communication where we’re out on the field. We’ve been able to get some pretty high-quality stuff done.”