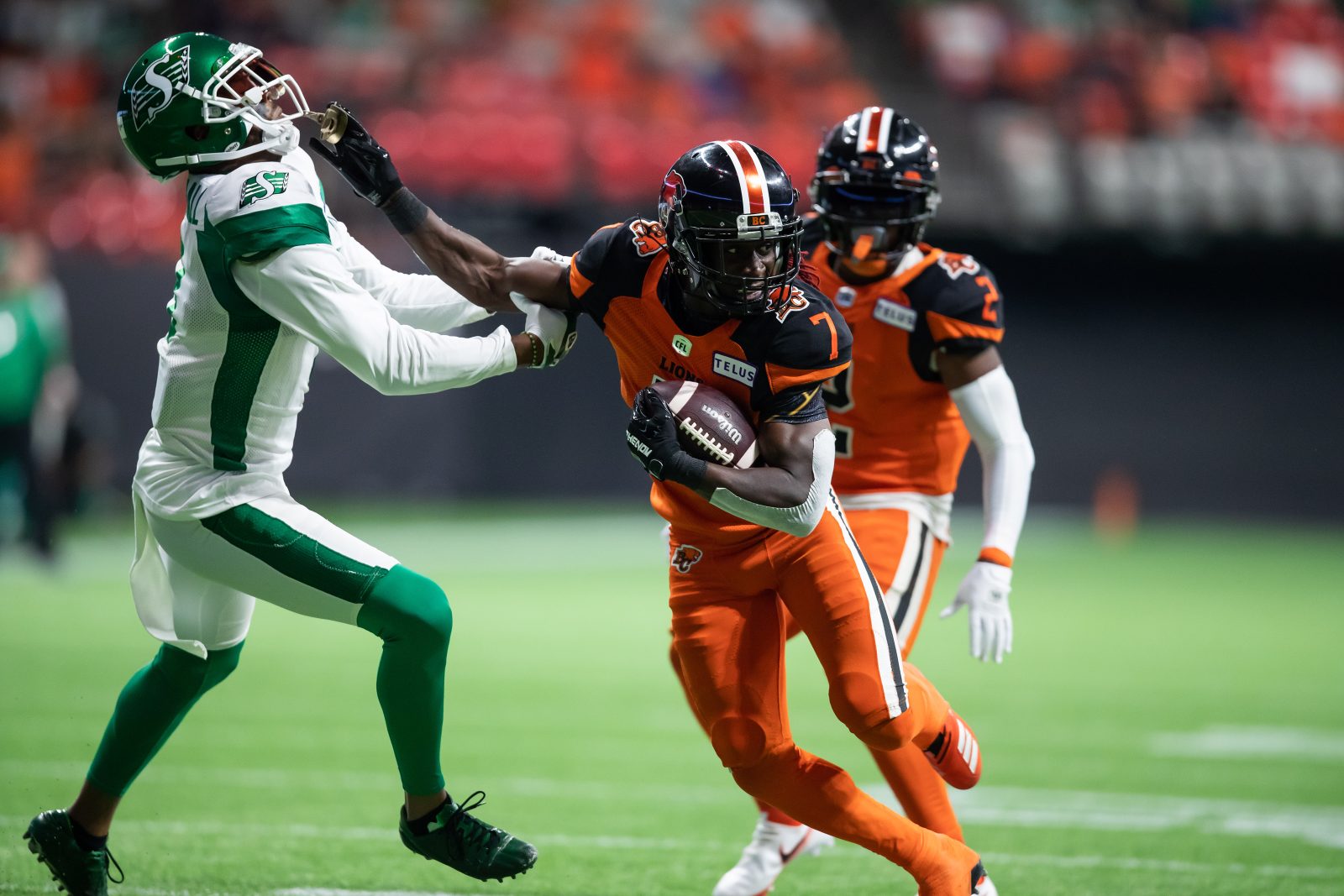 B.C. Lions' Lucky Whitehead (7) pushes Saskatchewan Roughriders' Nick Marshall away as he runs with the ball after making a reception during the first half of a CFL football game in Vancouver, on Friday, September 24, 2021. THE CANADIAN PRESS/Darryl Dyck

And just like that, the offseason flew by for Lucky Whitehead.

It was another productive winter in which he first signed a two-year contract extension with the Lions and recently expanded his dog family with a French bulldog puppy. In 2021, he proved doubters wrong by finishing fourth in the CFL in receiving yards and led the league with 447 yards after catch despite missing three games.

After suffering a hand fracture against his former team, Winnipeg Blue Bombers, in week nine of the campaign, Whitehead knows you can take no moment for granted in the game of football. He did manage to return for the squad’s final four regular season games and earn both CFL and Western All-Star selections. Now he’s ready to help his Lions take the next step back to the playoffs.

“Coming back from a broken hand as fast as I could, it was a sense of motivation,” said Whitehead from his off-season home in Virginia.

“It was frustrating since I was doing so well, and it was even harder just watching those games and watching my team. I’m definitely hungry, I just want to have a successful season.”

He’s been working with several different receivers coaches and trainers these past few years. Besides Lions receiver coach Jason Tucker, Whitehead also works with Delfonte Diamond in Houston and Raymond Washington in Virginia.

And the VertiMax training videos of him running on treadmills with resistant bands around him on social media are based in a gym in Melbourne, Florida, called ubrZati. Whitehead is always on the move, he said he tries to get the best knowledge from experts all over to expand his game.

“Obviously my speed is the most important part of my game. But I want my strength to be all over the place. I want to be able to feel good after every practice, not just a few weeks and then my body starts dying,” he added.

On top of working his tail off, Whitehead is a full-time dog dad. With four American bullies named Blitz, Basil, Birkin and Bellatrix already in sight, the new addition of a French bulldog puppy just made his household even busier.

“Her and Bellatrix bump heads. She’s three pounds, I think she has like little dog syndrome, so she tries to bite my big dogs and they just try to run away. It’s weird,” he said.

“It’s definitely been a lot of work. It’s fun at the same time. A lot of different personalities at the house.”

Whitehead also started taking leadership classes with an instructor to benefit his role on this Lions team and for the community, he’s involved with.

“We’ve been digging as far as how I can take this stuff outside of football and within the sport, in the community and just being able to communicate better with people,” he said.

When the Lions hosted its first free-agent camp since the pandemic on April 2nd in Washington, DC, Whitehead was in attendance to help the fellow players who are hoping to get a shot in the CFL.

Whitehead wanted to support the players he knew in the area, as well as share tips on what coaches and scouts look for in a player.

“I had invited a few of my boys, it was cool to see how people prepping for a workout to get into the league. I’ve been in that spot coming out of college trying to get a shot on pro day. A lot of them knew me from my NFL career, some watched the CFL, just bouncing questions of how I do certain things and what to look for,” he said.

“I was telling them this is the route tree that we’re giving you, don’t run the routes the way you’ve always been. For the most part, they were listening. They were flying around, excited. I was excited.” 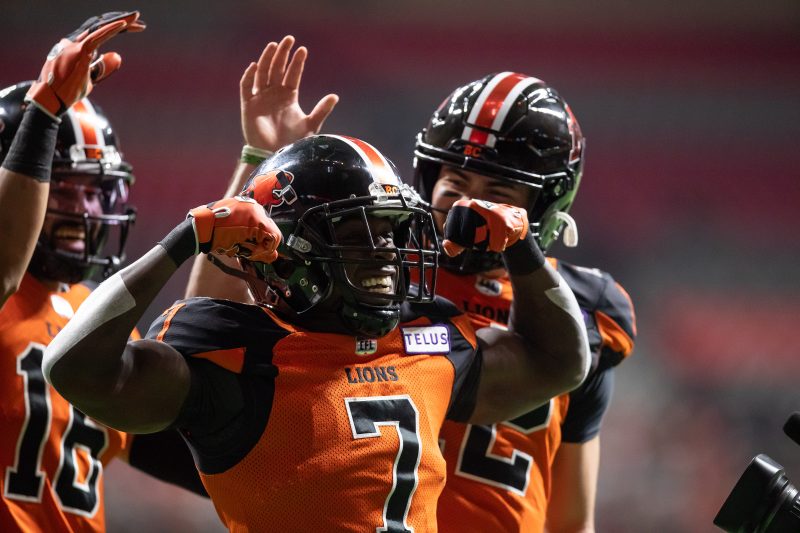 The speedster will be accompanied by another elite sprinter in next month’s training camp. The Lions had added former Oregon Ducks star, De’Anthony Thomas, and Whitehead is very stoked to have him on board.

Like many others, Whitehead is a big fan of the Oregon Ducks because of their flashy uniforms. And a phenom like Thomas added more flare to college football during his playing days at Oregon from 2011-13.

“I’m a big fan. I was a huge Ducks fan growing up. I like the colours. I like the team. So seeing him play and how electrifying he was in college was crazy. I saw him in the pros when he was on the Kansas City Chiefs and I was on the New York Jets,” Whitehead said.

“It’s going to be dangerous. I hope he adapts to the CFL game very quickly. I’m going to try to give him all the pointers. I know it’s an adjustment with the whole waggle situation but him being a returner is going to be amazing for us and wherever he lines up. I mean preparing for that is going a headache.”

Another reason Whitehead is eager to come back in orange is the bond with the receiving core like Bryan Burnham, Jevon Cottoy, Dominique Rhymes and more. Especially watching his quarterback Nathan Rourke’s growth in his rookie season, that’s why he signed the paper before the free agency just so he and Rourke could get connected early.

“It’s going to be fun. I want to be able to be a teacher, a leader and obviously continue to ball. To stay healthy and I’m definitely going to drain the energy. You hear me?”