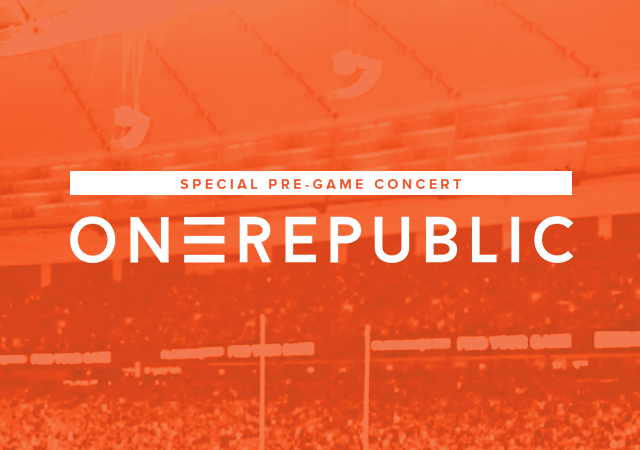 (Vancouver)- Global Pop sensation and Grammy nominated OneRepublic will lead the pre-game festivities at BC Place when the Lions kick off their 68th regular season on Saturday, June 11.

The pre-game concert will begin at 6:30 pm before the Lions battle the Edmonton Elks in their season kickoff game, making for a special evening in downtown Vancouver to celebrate the beginning of another season.

As Lions owner Amar Doman undertakes his mission to make Lions home games an event all fans across this great province won’t soon forget, the 2022 home opener will present a great night of entertainment as we return to welcoming spectators for a new, exciting era of BC Lions football.

OneRepublic previously served as the halftime entertainment for the 104th Grey Cup in Toronto in 2016 and more recently performed halftime for the NFL week one opener between the Los Angeles Rams and Chicago Bears in September 2021, the first game at SoFi Stadium with fan attendance.

Details will also soon be announced for an opening day street party on Robson St. prior to the pre-game concert.

The June 11 clash will be televised nationally in Canada on TSN and in the United States and United Kingdom on various platforms. Locally, the contest can be heard on AM730 and across the Lions Radio Network.

Single-game tickets can be purchased HERE.

Grammy nominated OneRepublic, is comprised of singer/songwriter and lead vocalist Ryan Tedder, guitarists Zach Filkins and Drew Brown, bassist and cellist Brent Kutzle, and drummer Eddie Fisher. The band released their debut set Dreaming Out Loud in 2007. The release included the 20mm selling smash single “Apologize,” which shattered digital sales and airplay records worldwide and received a Grammy nomination. The band’s sophomore album, 2009’s Waking Up, produced the hit singles “All the Right Moves,” “Secrets” and “Good Life.” The certified-platinum album Native followed in 2013, featuring the No.1 hit and 41 million selling single “Counting Stars.” OneRepublic released Oh My My, their fourth full-length album in 2016. OneRepublic has amassed 5B streams on Spotify to date. OneRepublic’s latest album, Human, dropped on August 27, 2021. It features singles, which combined have over 2.5 billion global streams: “Somebody”, “Run”, “Somebody To Love”, “Wanted”, “Didn’t I”, “Better Days” and “Rescue Me”, which has been certified RIAA Gold.