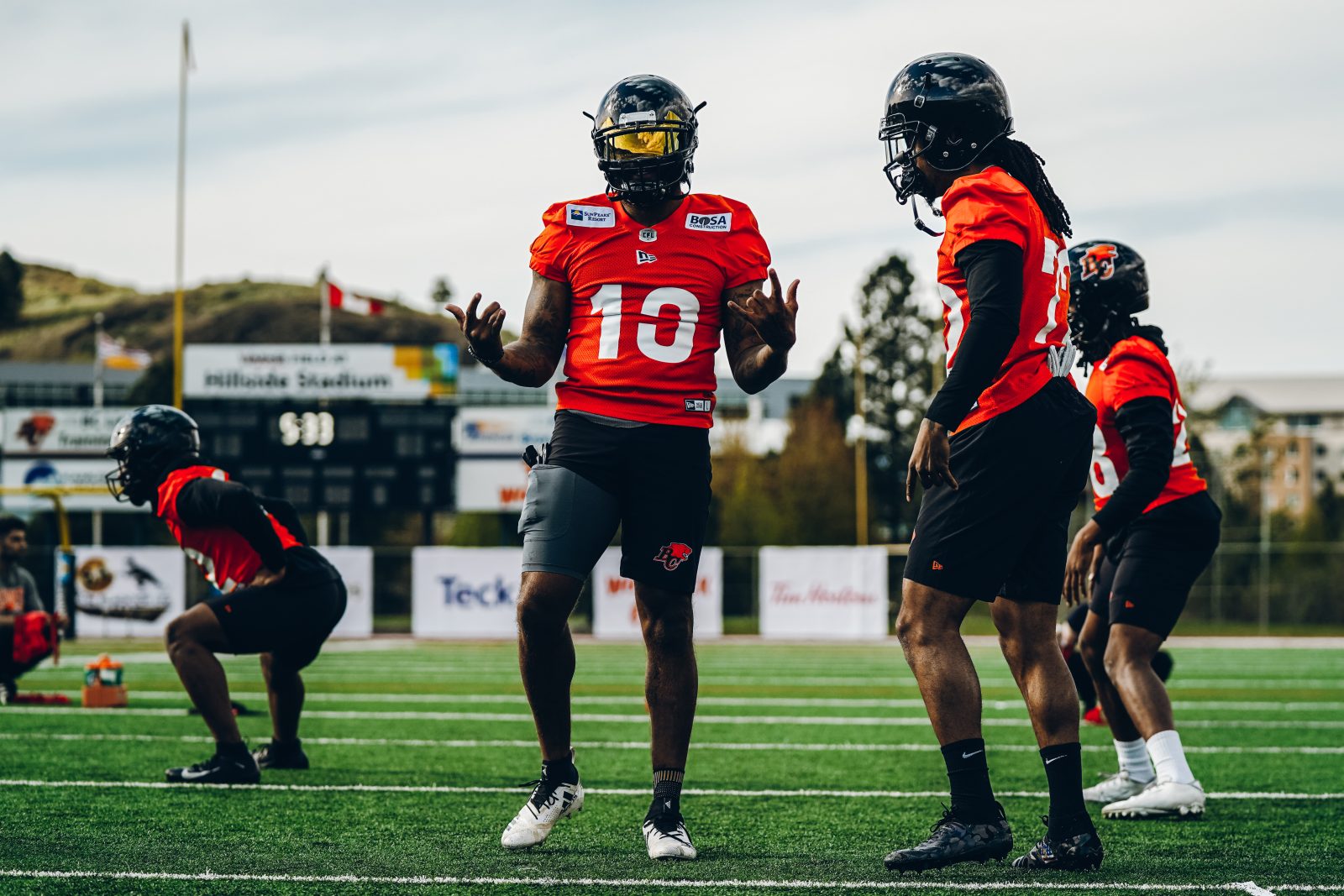 It has become one of the more common phrases of this year’s training camp: “It hasn’t felt like this since 2019.” The latest return to normalcy comes in the form of pre-season games. Depending on who you talk to, that is a good or a bad thing. For players and coaches, it’s a chance to evaluate and show you belong.

“It’s really crucial for the guys that are new to the CFL to see how they operate, see how they function in a game-like environment because we’re playing a different team. The other fun part is the scoreboard is on, so we’re going to compete. It’s going to be fun.” 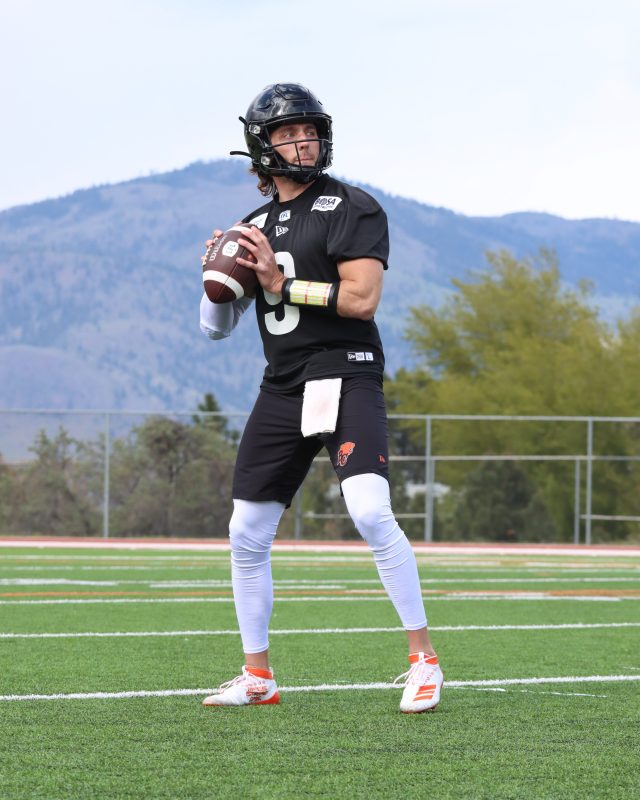 Lions fans will need to wait a week to see Nathan Rourke take snaps for the first time as the franchise’s undisputed number one signal-caller. Kevin Thomson and Michael O’Connor will share snaps in this first dress rehearsal for 2022. Both have looked sharp at various points in camp. For Thomson, it will be his first game action since December 2019 when he was wrapping up his college career at Sacramento State. He knows what’s at stake in his first pro game environment.

“I didn’t get the opportunity to get in, but I learned a lot,” said Thomson of his five-game stint on the practice roster last season.

“Now I get to go out and showcase what I can do and I’m excited to play with these guys. We’ve been grinding it out all through camp, working on timing, just meshing and now we get to go prove it in a game situation, so that’s going to be exciting.”

Thomson earned Big Sky Offensive Player of the Year honours while his 39 total touchdowns set a single-season school record. Considering some guy named Ricky Ray played there, not too shabby.

O’Connor for his part will be back in Calgary after dressing for six games with the Stampeders last season. He will also be eager to show well, having not attempted a pass since 2019 as a member of the Toronto Argonauts.

“I’m excited to see how they play in live action and see how they run the huddle, run the offence, all those things, ” Campbell added. 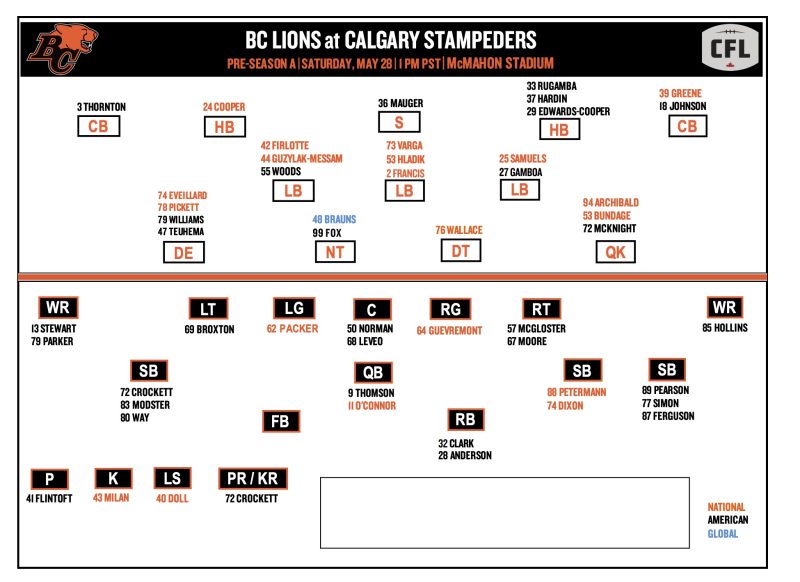 We outlined in an earlier training camp report out impressive the secondary has looked at various points in Kamloops. That includes both youngsters and vets alike. Newcomer Emmanuel Rugamba has been learning the ropes day in and day out and is now looking forward to breaking up a pass or two against a real opponent.

“I’m super excited to finally get out here and run around with these guys. I’ve been here about a week and a half, almost two weeks now so to be able to get in front of somebody else who is not in the same coloured jersey as me is going to be fun. I’m excited,” Rugamba said.

We recently chronicled the camp journey for fellow first-year defensive back Quincy Mauger who is also part of the secondary group making the journey to Calgary. Rugamba and the entire unit have developed a solid rapport through nine days of full camp and will certainly make decisions hard for coaches when it comes to trimming down the roster.

“We like to pick each other up and it’s been fun to just meet these guys,” Rugamaba added.

“Everybody is coming from all over the place and to be able to come together as we have done and the camaraderie we’ve built in the last couple of days, that’s going to be fun.”

Victor Gamboa, KiAnte Hardin and Jalen Edwards-Cooper are a trio of returning Lions suiting up in the secondary. 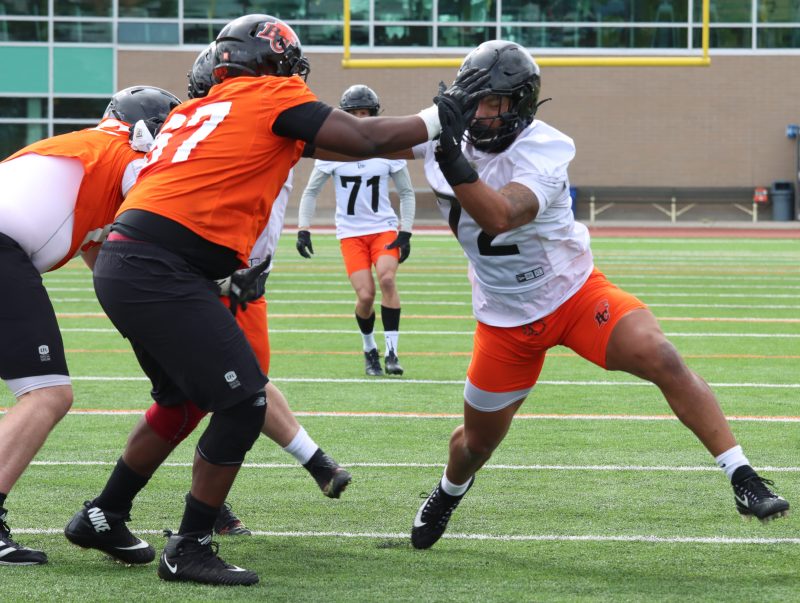 One final nugget from Campbell following Thursday’s walkthrough: he expects dressing a more regular season-sized lineup will pay massive dividends in terms of evaluation and opportunities.: “We don’t want to bring guys to another city just to play them for a series or two.”

A couple of other key areas to watch: receiver and defensive line. ArDarius Stewart, Josh Pearson and Montay Crockett have been among the standouts. On the defensive line, bookends Sione Teuhema and Romeo McKnight will be intriguing to follow.

Riley Pickett, Ryder Varga, Adrian Greene, Frednick Eveillard and Adam Wallace are the contingent of 2022 CFL Draft picks making the trip. That means Nathan Cherry and Noah Zerr are staying back in Kamloops. Zerr has been dealing with an ankle injury but continues to improve.

Just for fun: the last Lions pre-season experience was a 38-36 win over the Stampeders at BC Place on June 6 of 2019. Grant Kraemer’s touchdown pass to Wayne Moore with 50 seconds on the clock sealed the comeback win.

Fans can listen on AM730 and the Lions Audio Network starting at NOON with Bob Marjanovich and Giulio Caravatta bringing you all the action for another season.