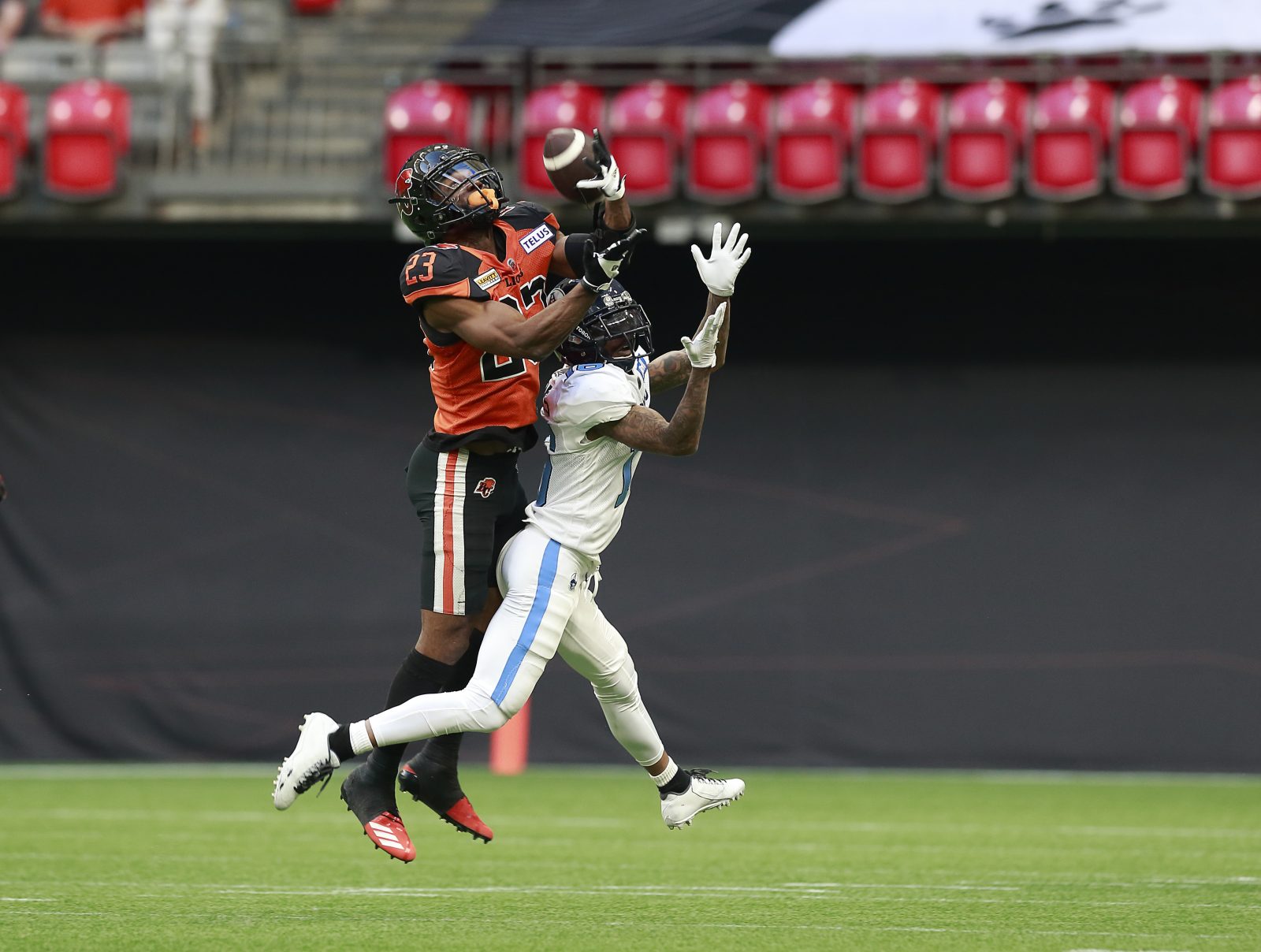 VANCOUVER, BC - JUNE 25: The Toronto Argonauts play the BC Lions in their CFL game at BC Place June 25, 2022 in Vancouver, British Columbia, Canada. (Photo by Jeff Vinnick/BC Lions)

He came out of retirement from football to join the Lions. There’s still plenty to prove for Delvin Breaux Sr.

There was a time that Breaux Sr. thought he was going to be sticking around in Hamilton for the rest of his playing career, as the Tiger-Cats brought joy and courage back for Breaux Sr., where some thought he wasn’t supposed to play a snap after sustaining a cervical vertebrae fracture back in 2008.

He’ll always cherish the success he had playing for the Tiger-Cats.

“It was an honour for me. Coming from where I was, the fans in Hamilton know my story. The arena football league, the GDFL after not playing football for six and seven years to getting picked up by Hamilton in 2013. Man, it was fun,” he recalled.

With three Grey Cup appearances back in 2013, 2014 and 2019, Breaux Sr. even caught the attention of the New Orleans Saints, where he would play two seasons and receive the Ed Block Courage Award in 2015.

“The memories I’ve built with those guys at a first-class organization, I thought it was going to be my forever home. But things happened differently, I’m very thankful,” Breaux Sr. added.

Breaux Sr. received a scholarship from LSU, but never took the field with the Tigers after the injury in 2008. When he fought his way back to join the Tiger-cats in 2013, he was teammates with Zach Collaros, Greg Ellingson, Ed Gainey and current Lions offensive lineman, Joel Figueroa.

“Being able to play with those guys was a treat. Obviously, over the years you saw those guys making the all-stars and helping their respective teams. Having those guys on your team was great but going up against them is the competition we all look forward to,” Breaux Sr. said.

“Some guys may call me during the week and be like, ‘are you ready?’ It’s just all competition with those guys week in and out. It’s great and best for this league.” 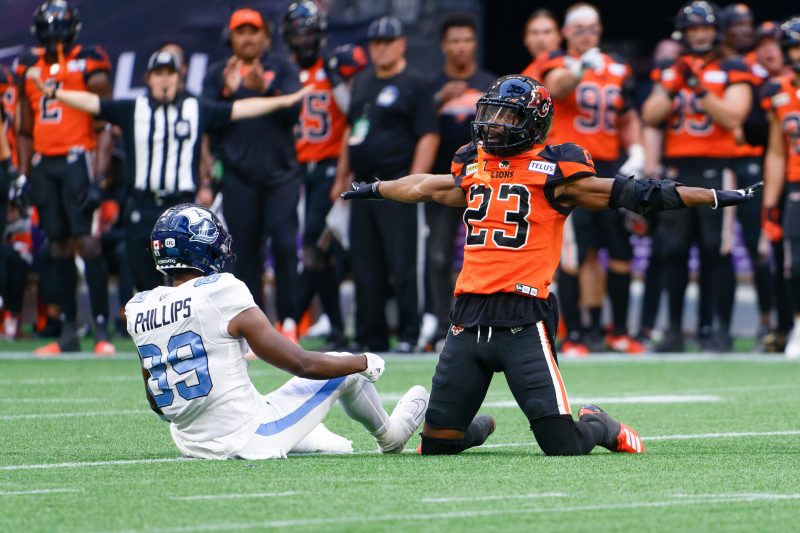 Now nine years later, Breaux and Figueroa are back on the same team as they saw Collaros and Ellingson beat the Lions during their Week 5 matchup.

Breaux and Collaros played in the Grey Cup final in 2014, Breaux believes the younger Collaros and his current quarterback, Nathan Rourke share a lot of similarities.

“What I see between Zach and Nathan is their patience. I remember watching Zacc back up Henry Burris in 2013 then he came in 2014. The patience he had seen him every day at practice, knowing his routes, going through his progression and his reads. Making quick throws. Man, I see that in (number) 12,” Breaux Sr. said.

For four seasons in Hamilton, Breaux racked up 110 tackles in 49 regular season games. He came close at the Grey Cup final three times, which is one of the reasons why Breaux came back to the gridiron.

“It’s like déjà vu all over for me, we got a guy right here [Nathan Rourke] that can lead just like Zach, he can get us there,” Breaux Sr. said.

When Breaux saw the 320-pound tackle Figueroa for the first time back in 2013, he wondered if he was a force of nature on the defensive line.

“I was like, man, that’s a big dude, what position is that big boy? He’s a great guy, he’s always laughing, always making guys laugh on the team. He’s just one of those great characters we had in the locker room during that year. He’s one of my good friends to this day,” he said.

The Lions return to the field this week in preparation to play against Breaux’s old team. It’s a game he’s been waiting for since he joined the Lions earlier this year.

Not only is the Hamilton matchup personal for Breaux, but the rest of the defensive backs are also aware of the Tiger-Cats’ passing offence, which ranks second in the league with 299.6 passing yards per game leading into this week.

Hamilton’s receiving core with Tim White, Steven Dunbar, Bralon Addison and more could cause some turbulence with their air attack.

“We know what those guys bring to the table. They have big Dunbar out there, he wants to go up and get the ball. We have to challenge those guys. They do all this movement, motion, they like to mess with your eyes so the big emphasis from RP [Ryan Phillips] this week is to make sure we are communicating,” Breaux Sr. said. 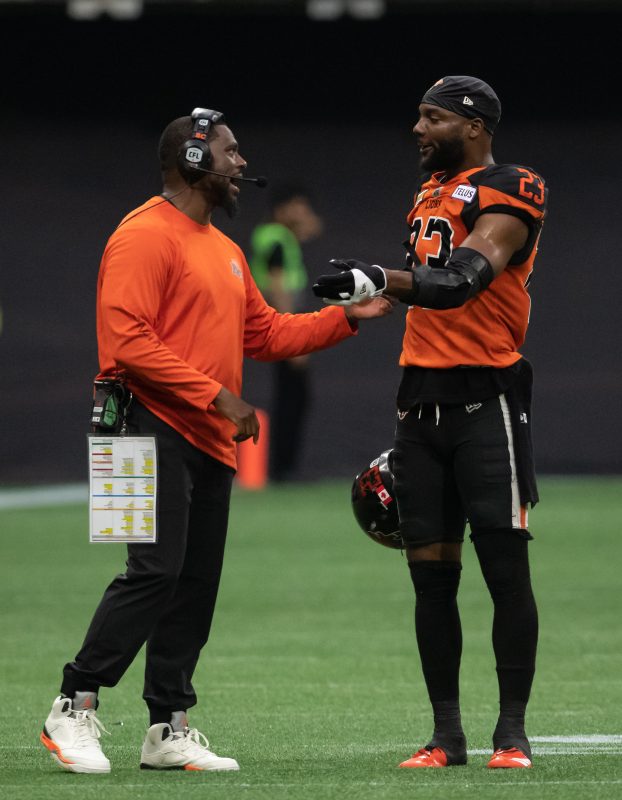 Although Hamilton’s quarterback, Dane Evans may lead the Tiger-Cats in rushing yards at the moment, they saw the return of running back, Don Jackson last week who put up solid numbers against the Lions last November with 12 carries for 80 yards and recorded a 31-yard-gain.

Whereas the Lions’ secondary has been gelling well together, according to Breaux. With a bye-week before to turn their focus onto this upcoming Thursday game and then travelling to Roughriders territory next week is never an easy task.

“You have ebbs and flows every week. We just need to go out there and do our thing,” Breaux Sr. said.

“It’s been wonderful so far and I’m learning still as a veteran. But playing with those guys like GP [Garry Peters], T.J., knowing his status and being an all-star, plus all the young guys. I can’t wait.”