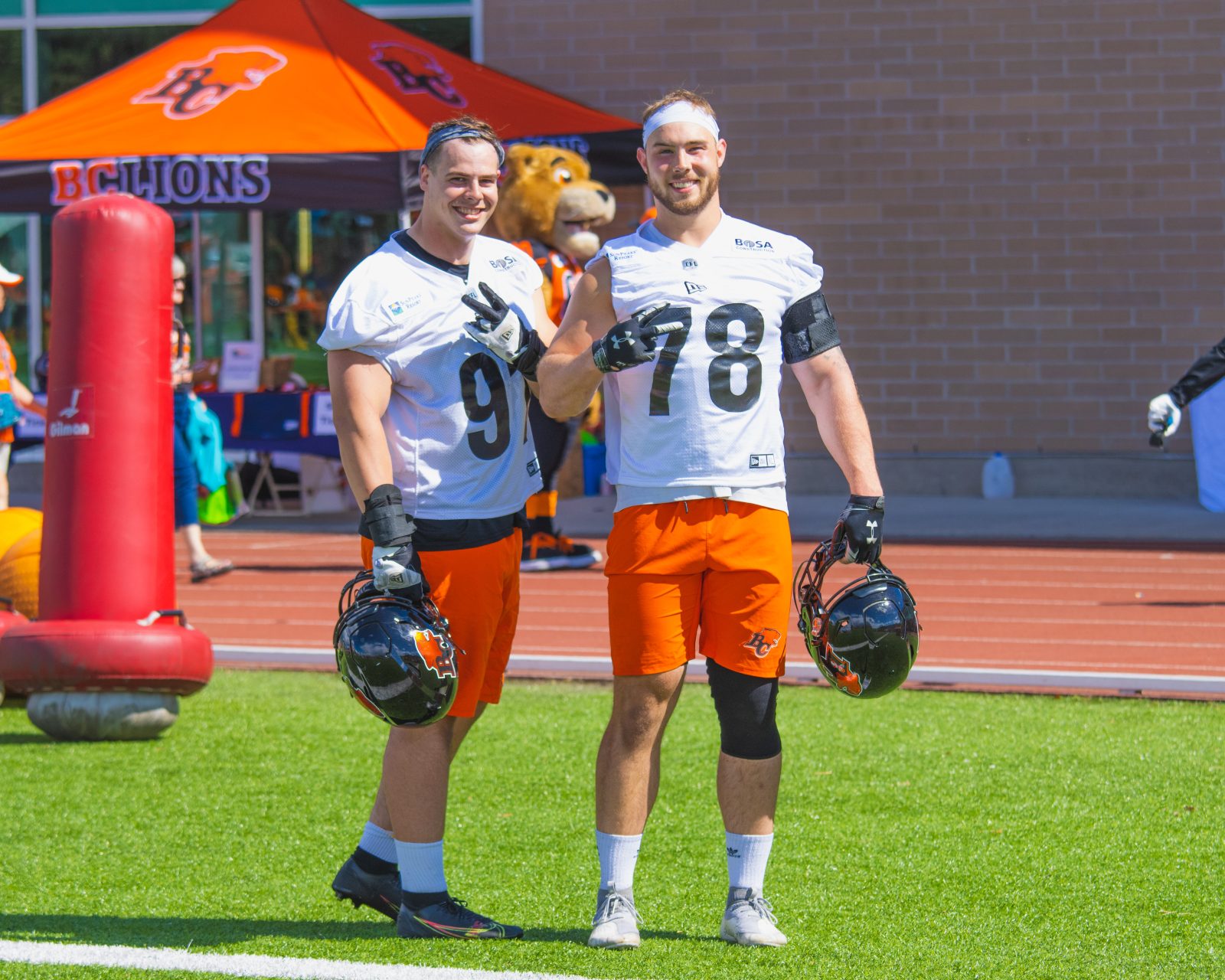 It was a tradition for Nathan Cherry and Riley Pickett to attend a Riders game or even watch the game at their grandparent’s house as a kid. Now their family members have a tough choice to decide whether or not they should put on the Lions jersey at Mosaic Stadium this Friday.

The Lions bulked up the roster during the 2022 CFL Draft back in May by selecting three players from the University of Saskatchewan Huskies: 1st round, Nathan Cherry, 2nd round, Noah Zerr and 5th round, Riley Pickett.

Now Cherry, defensive tackle and Pickett, defensive end will be suiting up to play against their childhood team, the Saskatchewan Roughriders on Friday. And offensive lineman Zerr has been earning reps at practice lining up as a tackle and guard.

“I remember when I was seven years old going to my grandma’s house and watching the Riders game. It’s a big part of the culture in Saskatchewan. To be able to participate on the opposing side is pretty awesome,” Cherry said.

“Always at the games every summer. It’s crazy just to think I’m going to play a game there and not watch it. It’s surreal,” Pickett said.

Growing up rooting for the Roughriders, they both have a favourite hometown player to watch. Cherry rooted for former CFL receiver Chris Getzlaf and Pickett enjoyed watching the former CFL defensive player of the year, John Chick.

“Chris is a great receiver, a local guy who was my favourite player,” Cherry said.

“As a pass rusher, I was always a fan of John Chick, who was a fan favourite in Saskatchewan for a long time. So you just look up to those guys growing up,” Pickett added.

While the Saskatchewan Huskies reached the Vanier Cup back in 2021, the first since 2006,  the three Lions rookies had to learn from the early obstacles whether it was beating other Canada West powerhouses like the Calgary Dinos or eyeing their sight to the Vanier Cup. 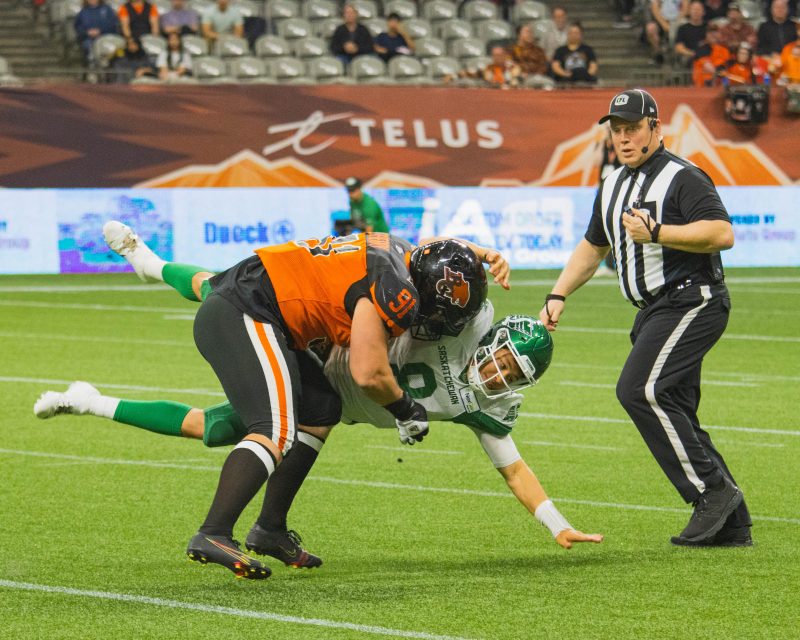 “Coming out of high school, I wasn’t really a refined football player. I had no offers or anything. I had to go to the junior route, work on myself and work on my craft. It paid off in the long run here. All the lessons and hard work that brought me here,” Pickett added.

While the three Huskies would go on to earn the nomination of Canada West All-Stars in 2021 and battled their way through the U Sports playoffs, their title run concluded when they fell to the Western Mustangs 27-21 in the 2021 Vanier Cup Final.

But Cherry and Pickett have high hopes for the Huskies for the future years to come.

“I don’t like any other teams in the Canada West. I hope it’s us for sure,” Pickett said.

They’ve stepped on the field at Mosaic Stadium numerous times when they were still students at the University of Saskatchewan, but this time they’re preparing themselves for a much more hostile environment.

“It’s really special. We are used to winning in there so it’s going to be the most comfortable away game that we are going to be at all year. Should be pretty good,” Cherry said.

“I have goosebumps and chills right now just thinking we’re going to play in there. I remember the first time I was there, there was a huge crowd screaming and stuff. I’m looking forward to Friday,” Pickett added. 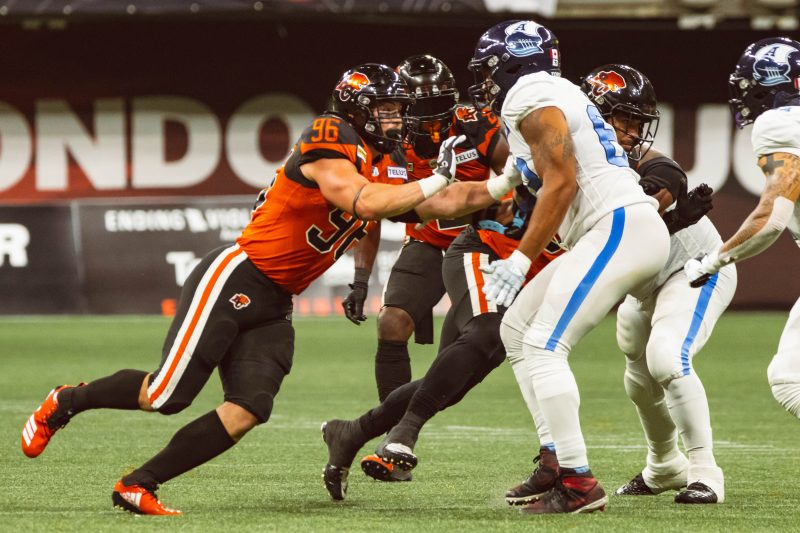 Cherry and Pickett have gotten even closer at training camp when they were paired together in the same dorm. Together, they’ve been learning from a few teammates on the defensive line and coach, John Bowman, who they said preaches on consistency.

Cherry says teammate Josh Banks played a key role in his transition from university to the CFL.

“The way he prepares for a game. He’s very physical and good with his hands. It’s been amazing to be an inside player and learn from him,” Cherry added.

Pickett says teammate Mathieu Betts’s high motor energy on the field is a trait he hopes to master one day.

“He’s got unbelievable moves, his first step off the ball is crazy,” Pickett added.

Cherry and Pickett have been bringing plenty of depth behind the Lions’ starters on the defensive line. Along with teammate Sione Teuhema, who recorded three sacks in Week 1 against the Edmonton Elks and global player, Tibo Debaillie, the defensive line rotation will aim to keep each other fresh throughout the entire game.

“Coach Bowman keeps it light in the meeting room, but he teaches you what needs to be taught. He also motivates you to be the best version of yourself. He’s played for a long time, so he knows what he’s talking about,” Pickett said.

This Friday will be the first of three tests against the Saskatchewan Roughriders in the 2022 regular season, and the next five games for the Lions will all be facing divisional rivalries, three of them on the road.