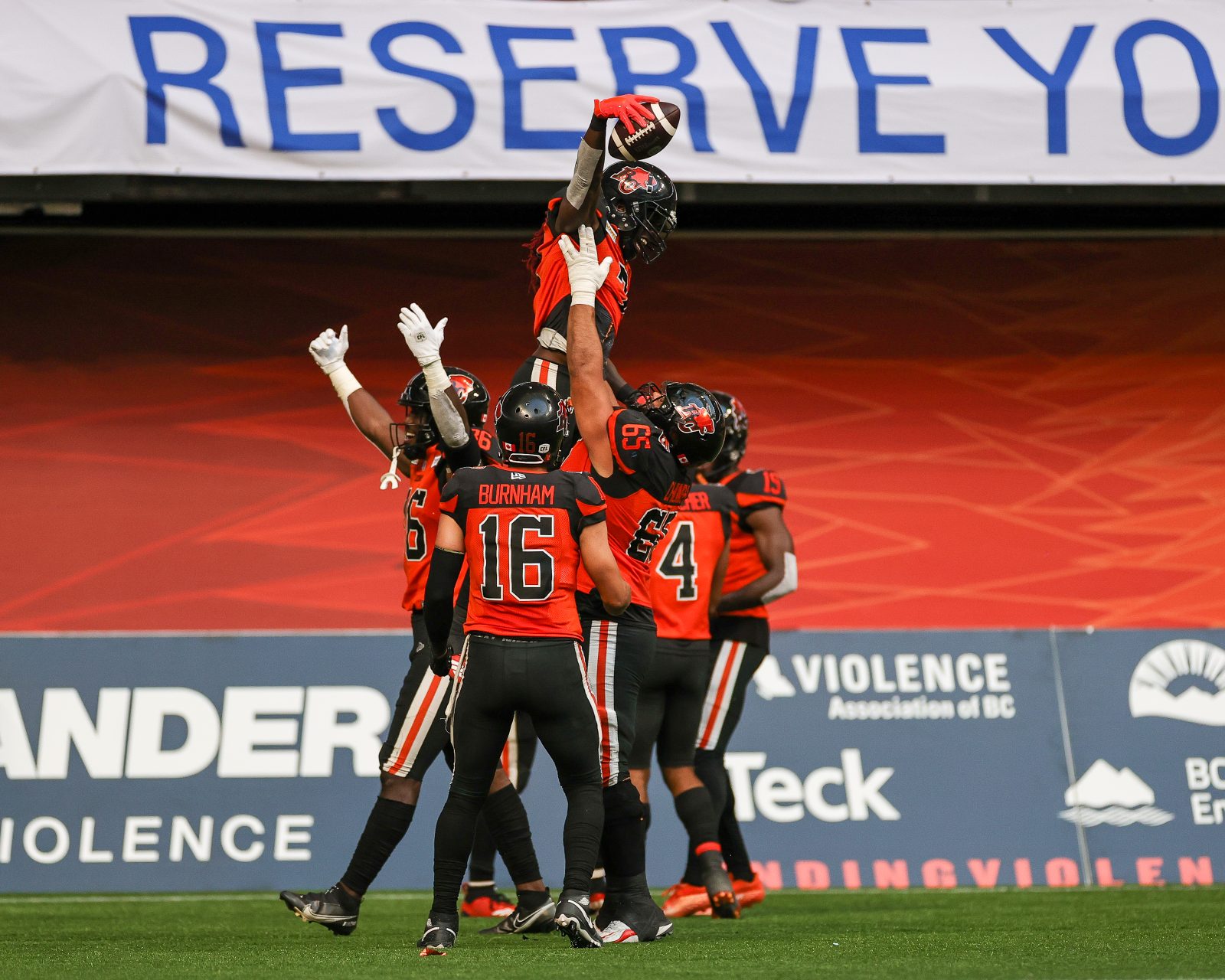 The Nathan Rourke Show is alive and well. And it was a performance reminiscent of their week one beatdown of these same Edmonton Elks. Rourke and the Lions came out firing on all cylinders in a 46-14 thumping of the visiting Elks to improve to 6-1 in what has been a season that, so far, no one will soon forget. Here are some game takes following the dominating victory,

Rourke was on fire in the opening 30 minutes, completing 23 of 26 passes for a remarkable 386 yards and five touchdowns- three of those to Dominique Rhymes- while helping the Lions churn out a total of 412 yards of total offence and a 37-7 halftime lead. Officially, the CFL hasn’t tracked records for total yards in one half but it’s safe to say they at least came close to shattering the mark.

Overall, it was a nice touch to see the offence perform consistently after taking a quarter and a bit to get going in last week’s comeback win in Saskatchewan. He also threw majors to Bryan Burnham and Lucky Whitehead in that first half. As usual, the quarterback wanted no part of taking the credit for himself.

“I think that we had a great week in practice, I think the guys worked really hard, I thought the coaches did a really good job with the game plan,” Rourke explained.

“We didn’t really know what they were going to give us but we made sure that we had options for whatever they were doing and kudos to the guys for getting open and making the plays and to our coaches for making it happen.”

Rourke ended his night with 477 yards, breaking his own single-game record for Canadian quarterbacks that he had set back on June 25 of this season. His 91.9 completion percentage was the highest ever in CFL history for 30 or more pass attempts in one single game.

The story just keeps adding impressive chapters. Rourke’s seven-yard touchdown run was the only major they could find in the second half. Establishing more chemistry with Rhymes and connecting on the three touchdowns was a very pleasant takeaway.

“Amazing, spectacular, awesome, a hard worker,” said Rhymes of Rourke after the win.

“It’s funny because we never plan for it to be that way,” added the quarterback on hitting Rhymes for a hat trick.

“On the first touchdown, we had multiple options for it. Lucky ended up popping late so he could have caught the ball. On the second one, we really called it for Lucky but they just ended up covering him and so I ended up with the second option being Rhymes and the third one I just kind of threw up a jump ball and that’s kind of the game plan, especially down there. It just kind of happened naturally and I’m excited for him to get the numbers that he’s been getting. He deserves it. I love that guy, he works so hard, and has such a great attitude.” 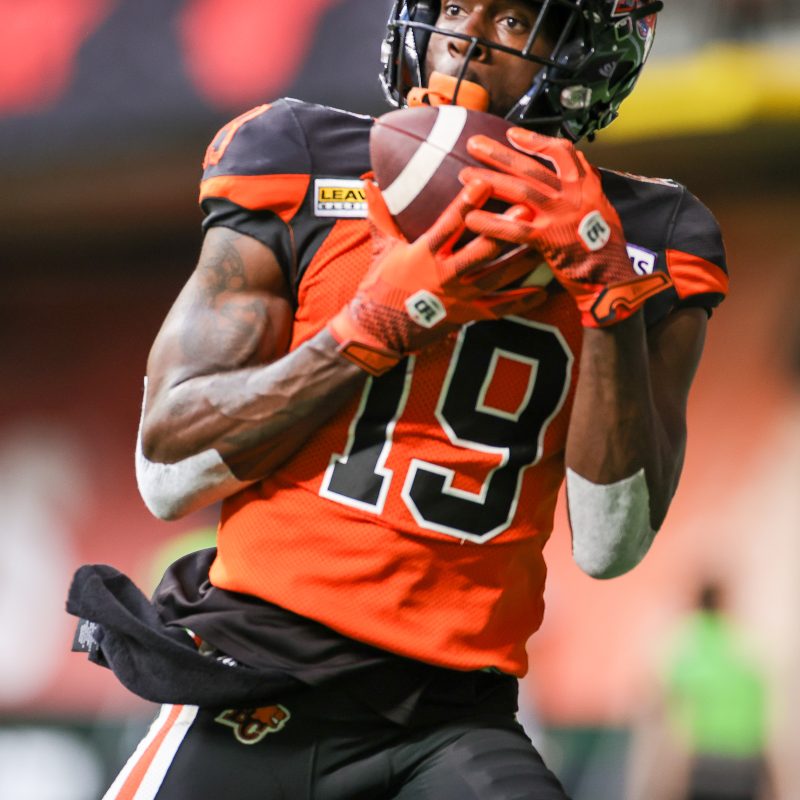 Just like their week one victory against this squad, head coach Rick Campbell commended his team for not being content with just a fast start. The Lions outscored Edmonton by a modest 9-7 margin after the break, but it says a lot that they didn’t come out and let the visitors outplay or outscore them.

“You never know what’s going to happen. The games aren’t over when the score is the way it is, ” Campbell said.

“You never know what’s going to happen in this league. What I like about our guys is that they wanted to go win the second half. We had the same situation against Edmonton and against Toronto in our first two games and our guys don’t let up. They want to just play good football and see what happens.”

A big part of the strong finish was a suffocating defence that limited Edmonton quarterback Taylor Cornelius to just 183 passing yards and sacking him on five occasions. UBC product Ben Hladik recorded his first career interception for a final dagger. 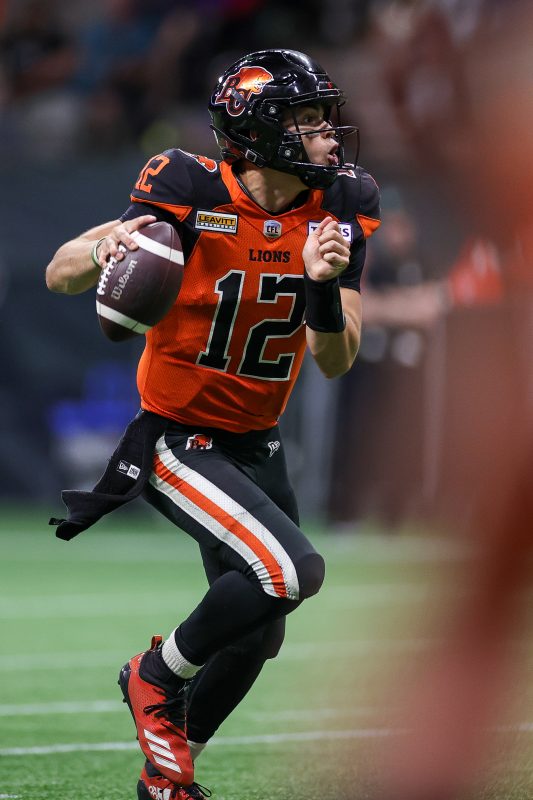 540- the Lions’ total offence after a more ‘pedestrian’ second half.

6,764- Burnham’s career total in receiving yards as he passed Mervyn Fernandez for fourth on the club’s all-time list. He had 82 yards and his touchdown on six total receptions in his return from rib and lung injuries.

148- a game-high receiving yards total for Whitehead who demonstrated his playmaking and separation abilities on a couple of occasions.

8- A CFL-leading touchdown receptions on the season for Rhymes.

5- the total number of sacks for the Lions: two each for Mathieu Betts and Sione Tehuema and one for Tibo Debaillie.

Rourke and the Lions head to Calgary for a big week ten matchup on Saturday, August 13 at McMahon Stadium. The 5-2-0 Stampeders prevailed 17-3 in Ottawa on Friday night.