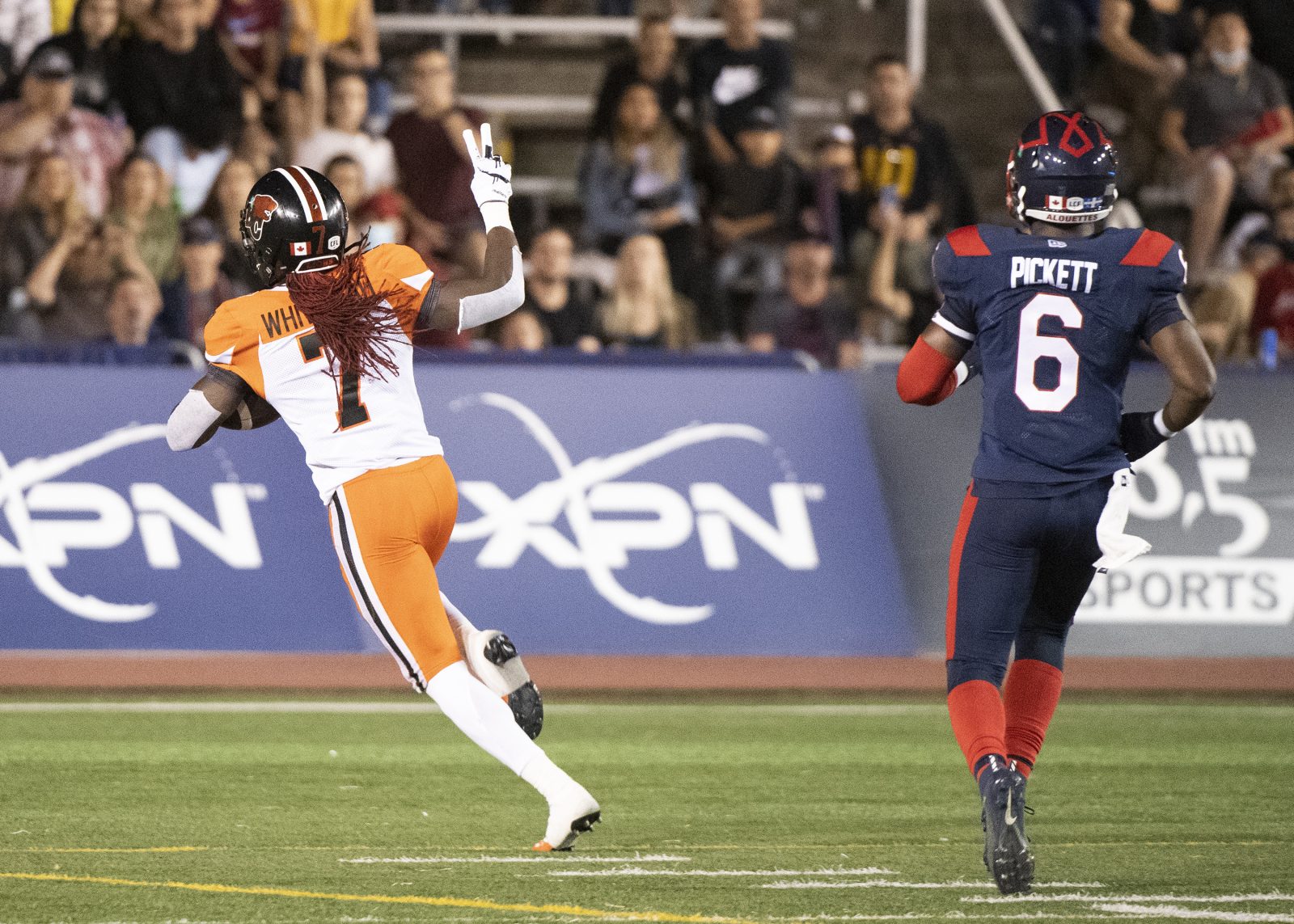 B.C. Lions’ Lucky Whitehead (7) runs in for a touchdown against the Montreal Alouettes in Montreal, Saturday, September 18, 2021. THE CANADIAN PRESS/Graham Hughes

The bye week respites are over. Now for the next eight weeks and beyond, the 2022 BC Lions want to prove they are in this race for the long haul. And although the forecast for Friday’s game in Montreal calls for sunny skies and temperatures in the mid-20s, Dominique Rhymes and company know that the elite teams continue to rack up wins when the weather gets bleaker.

It’s something they couldn’t sustain last season after an impressive 4-2 start that took them into mid-September of the shortened campaign. Now they are ready to ride the momentum wave starting this week against the 4-7 Alouettes.

“We felt the pain of last year and not capitalizing. I think each and every day at practice and at the games, you remember those plays you should have made,” explained the Lions’ leading receiver.

“When it comes to these games and this year, every play needs to be made. We know how it felt last year and we don’t want to feel that way no more.”

With an 8-2 record and some key wins banked against divisional opponents they are battling with for the right to be at home come playoff time, these 2022 Lions certainly are proving that the real season in fact starts well before Labour Day weekend. 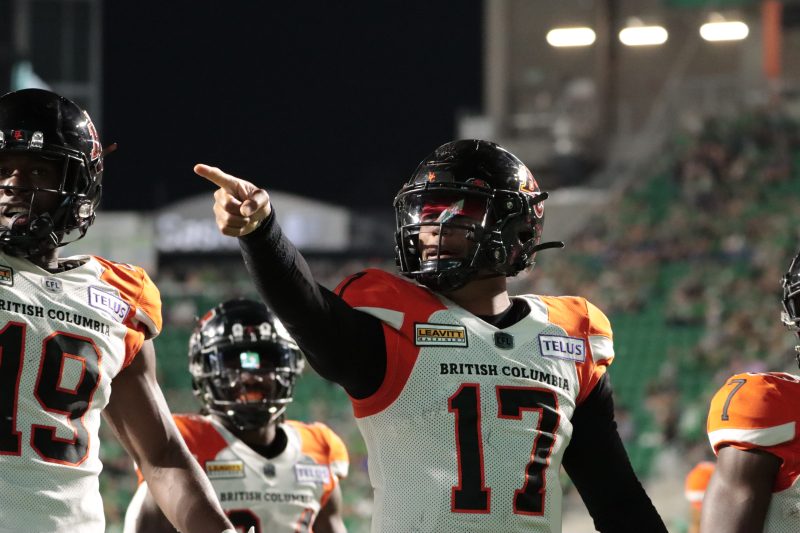 Another intriguing storyline this week is Vernon Adams Jr. dressing as a Lion for the first time against the team that dealt him here barely one week ago. As per the club’s depth chart below, head coach Rick Campbell plans to start Antonio Pipkin, another ex-Alouette’s pivot. Who finishes the game behind centre? That will remain to be seen. Campbell anticipates Adams Jr. seeing some sort of action this week after the newcomer spent much of the last seven days picking up the new offence.

“We fully anticipate him playing in some fashion and how much that is, is to be determined,” said Campbell of Adams Jr.

“He knows quite a bit. He understands concepts as far as what offences do, he understands CFL defences. So, it’s more terminology and learning that part of it. So, you’re not dealing with a brand new guy that is trying to learn the CFL and that type of thing. There is a head start with that front. He’s taking to it really well. I would say it’s gone better than expected, so that’s a good thing.”

One thing is also clear: adding players like Adams Jr. and return specialist Terry Williams certainly sends a message to the veterans that this Lions brass is serious about making a deep November run.

“We have the complete team and we know what we bring to the table. Adding more pieces makes us more dangerous. I love the moves. I’m excited for them to get out and show what they can do.”

And they know if the wins keep piling up when the weather cools down, it can only mean good things for the overall outlook.

“The weather is going to change, but rain, sleet or snow, I know my teammates and I are going to be ready for anything,” said Rhymes.

“We’re just going to come out with great focus. The back end of the season takes more focus, so I know we’re going to do everything we can to be ready. It’s going to be good for us.” 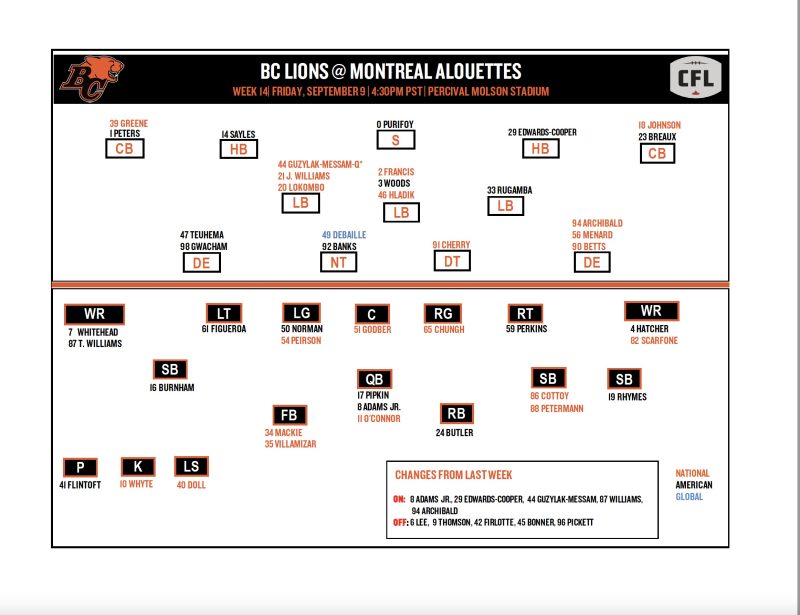 Season Series: Friday marks the first and only regular season meeting between these two clubs. The Alouettes will not visit BC in 2022.

#87- WR/KR Terry Williams- another big piece brought in via trade last week, the CFL’s leader in kickoff return yards could be the major special teams spark this team needs. Williams dressed in Ottawa’s first nine games of the season before they brought back DeVonte Dedmon from the NFL.

#91- DL Nathan Cherry- the 2022 first-round pick makes his first career start at defensive tackle as a result of the necessary ratio shuffling with an American starting at quarterback. The Saskatchewan Huskies product has dressed in nine games in the rotation in his rookie campaign, recording five defensive tackles, one sack and a forced fumble.

#20- LB Bo Lokombo- makes his second appearance coming off elbow surgery, only this time in a starting role ahead of Jordan Williams at the WILL position. Look for the reigning CFL Most Outstanding Canadian to once again become the game-breaker he has been known to be. 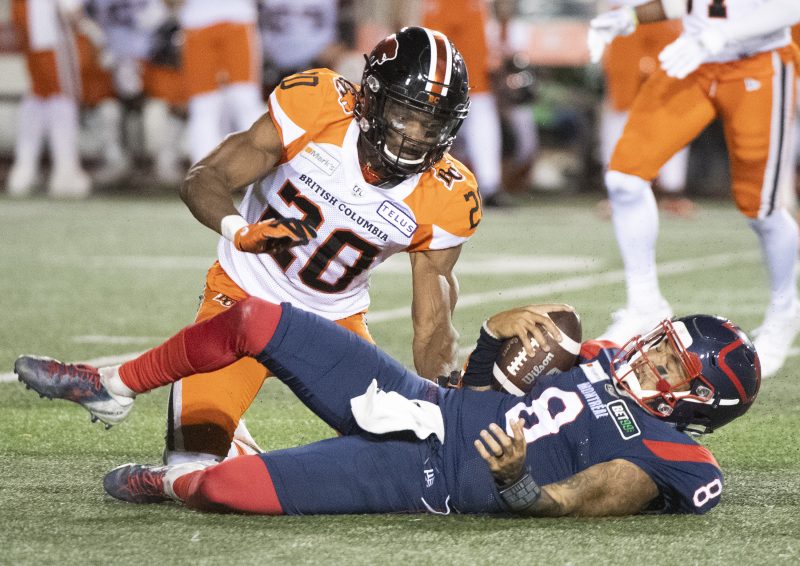 Montreal has been a successful voyage for the Lions in recent years. The Leos have prevailed in five of their last six visits to Molson Stadium with the lone blemish coming in a September 2019 matchup. Lucky Whitehead’s 133 receiving yards and touchdown score were big catalysts in the 27-18 victory there in 2021, which improved the squad to 4-2 on the campaign. They would win just one of their remaining eight contests after that.

Jalon Edwards-Cooper makes his second appearance of the season in place of TJ Lee (hamstring) at halfback. After speculation to the contrary earlier in the week, Phil Norman remains the starting left guard with Andrew Peirson staying in his reserve role. Isaiah Guzylak-Messam is slated to return after missing the last game with a hamstring tweak. He’s back on in place of Jacob Firlotte. Cherry’s promotion to the starting lineup means American Tim Bonner sits this week out.

The slightly tweaked Lions’ secondary will get a good test as Alouettes receiver Eugene Lewis is second in the CFL with 913 receiving yards while his 60 receptions ties him for second in the league with Lucky Whitehead.