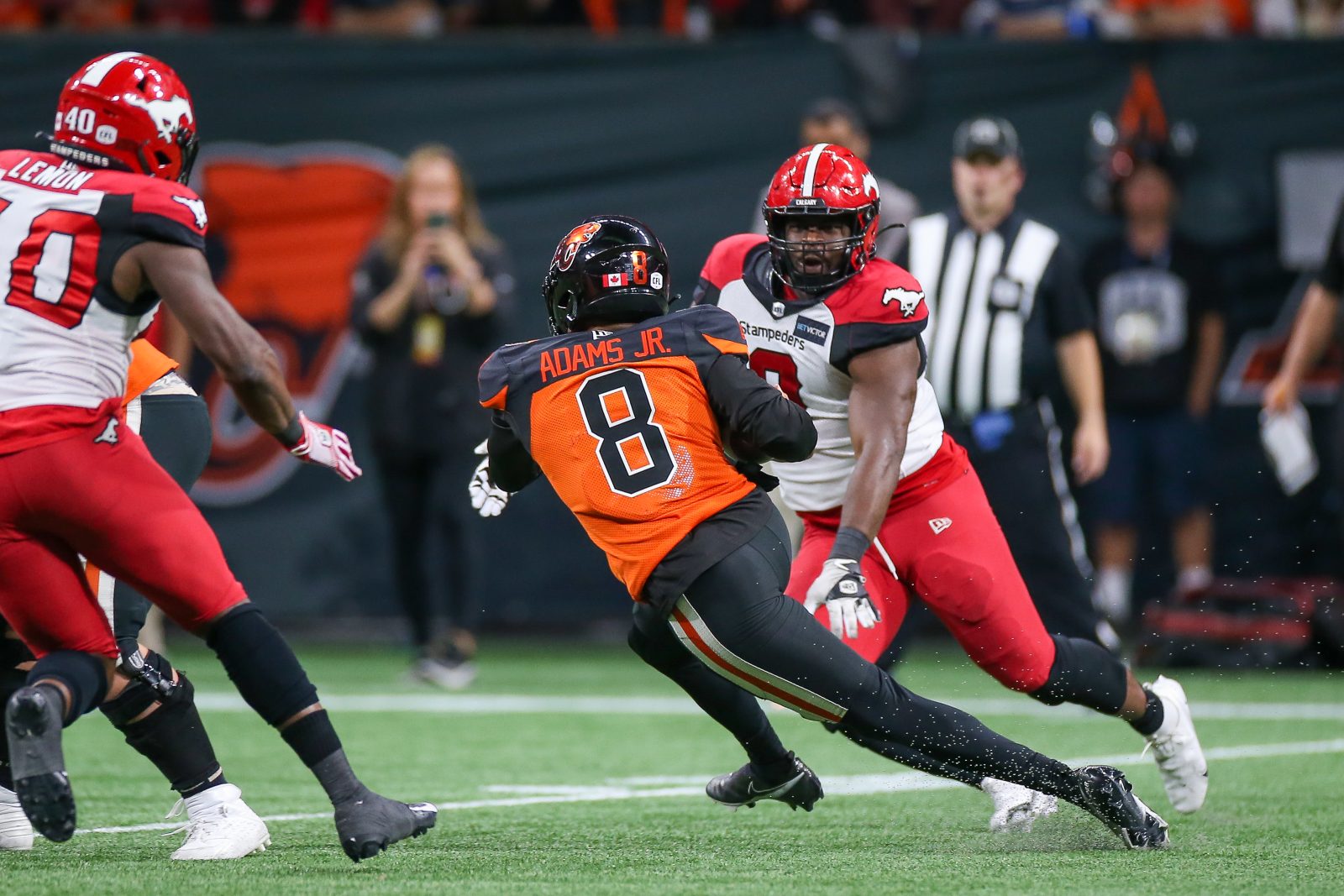 2022 BC Lions Football vs Calgary

The BC Lions ran into a defensive buzzsaw and were also victimized by a couple of costly penalties. Those were the main storylines in a 25-11 loss to the Calgary Stampeders that dropped the home squad to 9-4 overall and 1-3 since starting quarterback Nathan Rourke went down. The end result also meant both teams locked up playoff spots. The Lions were officially in when Ottawa dropped a decision to Toronto earlier on Saturday. The 9-5-0 Stampeders are also in by virtue of the 14-point triumph. Now for some game takes from Matt Baker. 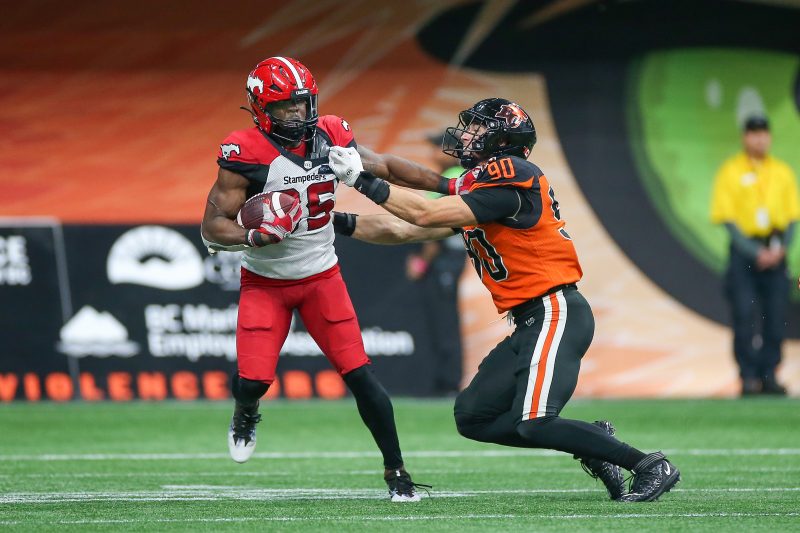 Offence Stalls For Much Of Night

It wasn’t a home debut to remember for Vernon Adams Jr. Give credit to an aggressive Stampeders defence that brought pressure most of the night and sacked Adams on five occasions. The offence also failed to get inside Calgary’s 30-yard line until the final minute of the third quarter when Sean Whyte broke the goose egg with a field goal. Always an honest critic of himself, the Lions’ pivot owned it after this loss.

“We just didn’t stay on the field as long as I’d like for the defence,” Adams said after the loss.

“We need to give them more of a rest. The two and outs are just unacceptable. Calgary did a good job, you know, game-planning and everything. I could put the ball in better spots for the receivers. It was just one of those tough ones tonight.”

Adams finished his night 12/24 for 151 yards. Antonio Pipkin relieved him late in the fourth and hit Dominique Rhymes for their only major of the night.

Calgary got a first-half major on a run from Ka’Deem Carey while Peyton Logan helped seal the deal on the drive before Rhymes scored. The Carey three-yard score was aided by a questionable horse collar call on Jordan Williams which helped set Calgary up with favourable field position. Costly infractions are always tough to swallow. To a man, they admitted they didn’t execute enough.

“We couldn’t get into a flow most of the night,” head coach Rick Campbell said.

“Our defence I thought kept us in the game but we gave up some big plays and the tackling, especially later in the game, is frustrating for any defensive player when that happens. I think we’re a good team. Bad day at the office and I hope we use it as fuel and motivation to come back, get better and play better next week.”

It is also almost a forgone conclusion that these teams will meet once again come playoff time. Both teams are deadlocked with 18 points, six behind the first-place Winnipeg Blue Bombers. The Lions do have a game in hand plus own the tiebreaker over Calgary. It is in their hands when it comes to finishing as high as second place in the West. First priority is getting back in the win column next week.

“We’ve got to watch the film, we’re going to see and get it right,” added Adams.

“A few of those (drives), we started off pretty good moving and a couple plays here and there I might have not gotten to my second read. I’ve got to check it out.”

There wasn’t any immediate solace in locking up a playoff berth in the losing cause, but the next couple of days might bring some more perspective. 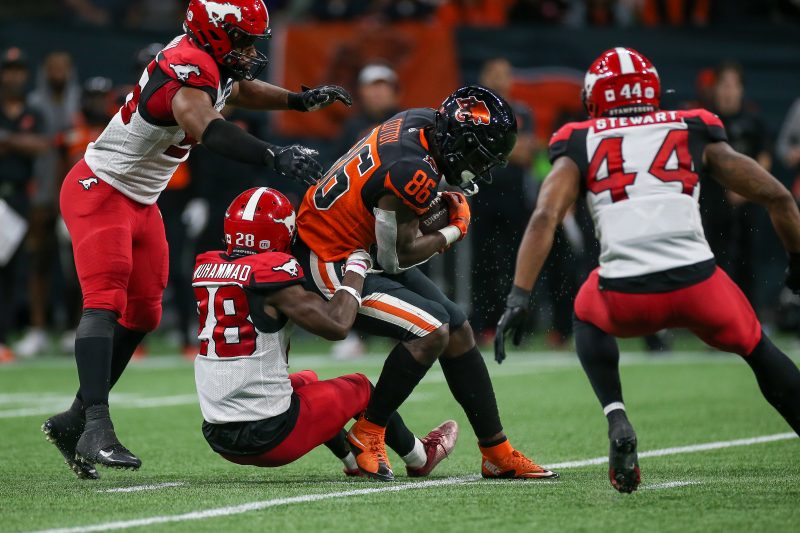 Campbell did not provide any immediate updates on Bryan Burnham (hand), Obum Gwacham knee or David Mackie (foot). The squad gets back to practice on Tuesday.

34:02- Maier and the Stamps had a big advantage in time of possession.

58- a team-high in receiving yards for Bryan Burnham, giving a clear indication of how hard it was for the offence to find traction.

7– Calgary extended its win streak in BC to seven games. Their last loss in Vancouver came on June 25th of 2016.

15-7– the road team’s record in games played between Western Division teams this season. That included the Lions’ combined record of 4-0 in Calgary and Saskatchewan.

The Lions take on the Ottawa REDBLACKS next Friday, September 30th in their second and final regular season meeting. The Lions prevailed 34-31 in the nation’s capital back in week four on June 30th. Ottawa dropped to 4-10 with a 45-15 home loss to Toronto on Saturday, the result officially locking the Lions into a playoff spot.