Broxton Bounces Back After Long Road To Recovery 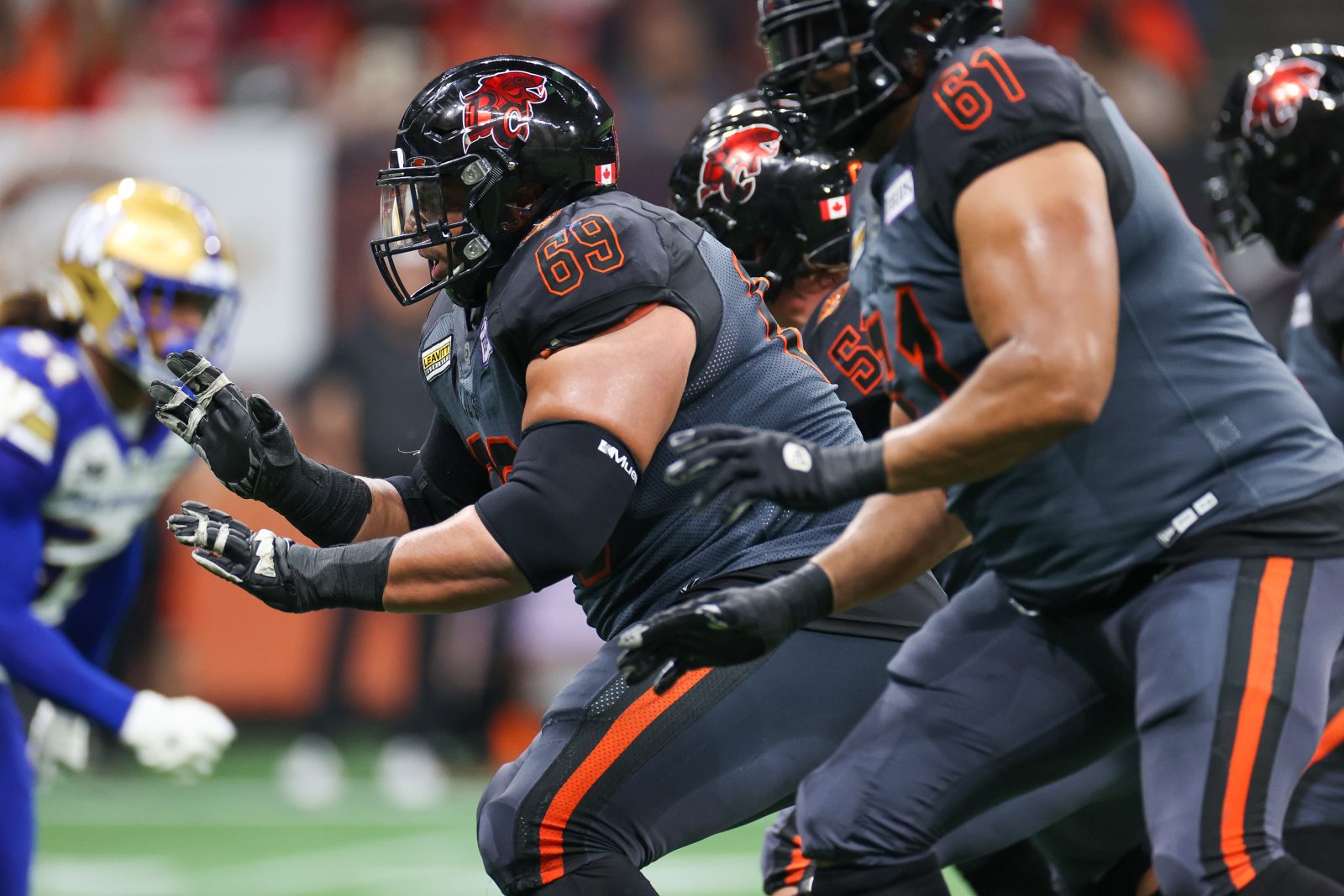 Broxton Bounces Back After Long Road To Recovery

He has endured several trials and tribulations for almost two seasons with the Lions. After suffering a season-ending torn bicep injury during his first start in 2021, Jarell Broxton has bounced back in 2022, pushing for the pylons with the offence.

It wasn’t the ideal Lions debut for Broxton last year when he finally had the opportunity to start against the Ottawa REDBLACKS in week four of the 2021 season. Midway through the game, Broxton exited the field holding his arm. At that point, he knew his season could be over.

“It was hard throughout the rest of the season to just watching everybody play and not being able to practice and all that. I just told myself in the offseason that I make sure I come back better, stronger,” Broxton recalled.

“I felt that I did that so here we are today,” he added. 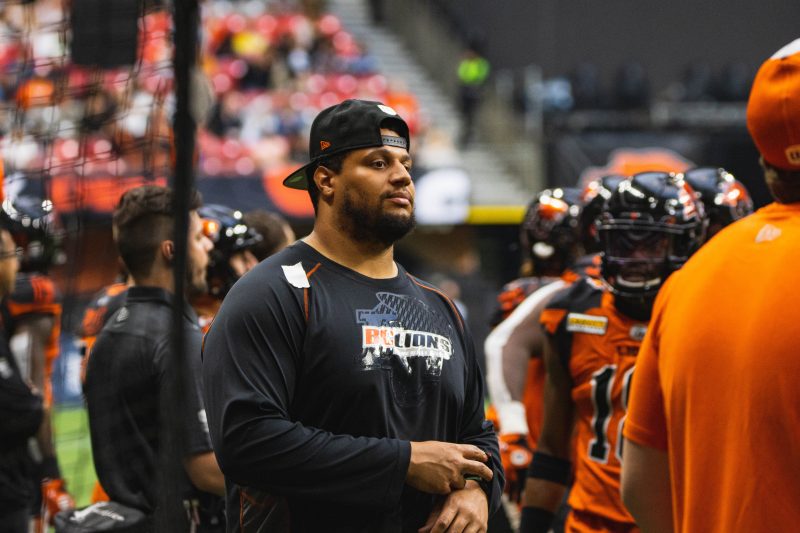 In a shortened and delayed 2021 year, Broxton spent half of the season rehabbing his injury after a successful surgery. But the challenges had just begun. He spent his days at the Lions facility doing rehab exercises by himself most of the time when the rest of the team are prepping for the game — until a fellow teammate encountered the same injury.

Up to that point, the O-Lineman and the defensive back only had limited interaction. Because of the injury, Broxton and Gamboa were available to pick each other up through the recovery stage.

“I didn’t get to know Victor until our injury. We ended up building a good relationship over time. We texted a little bit in the off-season about how our arms were feeling. It was good that we helped each other through the injury. We stayed positive because we were both going through the same thing,” Broxton recalled.

Another teammate that boosted Broxton’s recovery is fellow O-Lineman Kent Perkins. The duo both played in the Big 12 conference. Broxton was a Baylor Bear and Perkins was a Texas Longhorn.

“We both came into the CFL at the same time. We played on the O-Line, so we play on the opposite sides of the field. It was cool to know each other. I have the best chemistry with Kent on the team because it’s just comfortable to talk to him like a brother and we try to give each other pointers about the game,” Broxton said.

While each positional group on the team always travels as a pack, the O-Line’s bond is like no other, too. Broxton added that players usually go out to dine with teammates, but his bond with Perkins has become a brotherhood.

“He and I were roommates last season, I got to see how he is off the field. It was like a different perspective, not just going out to eat but actually living together. And we built a bond over time,” Broxton said. 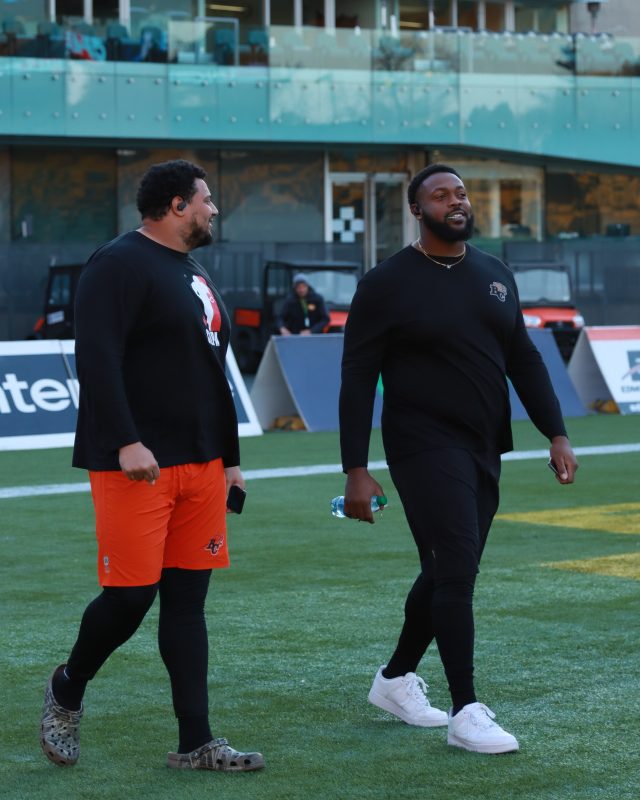 After a long off-season of recovery, the 325-pound lineman arrived in 2022 to prove he’s capable to compete with new and familiar faces. This time around, Broxton said he’s more comfortable because of all the lessons 2021 has taught him.

“This season is different because I know the playbook so I can play fast. The camaraderie with the guys makes me feel comfortable. I’m getting out of my shell, so it helped me to have more confidence,” he added.

Broxton took on the reserve role on the line for the majority of the season, but without any doubt that he’ll be back on the field when the team needed him.

“All season, I was like, ‘my number might get called or it might not. I might as well stay positive and come to practice learning what I could from the people in front of me,’” Broxton said.

“This was a challenge for myself, and I just took it head on,” he added.

Broxton has been prepared for this moment to suit up for the Lions since his season-ending injury. It was a special game for Broxton to return to the lineup filling in for teammate, Phil Norman who is dealing with a shoulder injury.

He finally made his 2022 debut two weeks ago when the Lions hosted the Winnipeg Blue Bombers in week 19, where the team rocked the throwback gunmetal grey jersey. The team showed up at BC Place the day before for a walkthrough and saw the slick grey uniform hanging over each player’s locker room.

“It was a good experience in my first start to put on those new jerseys a few weeks ago. It was a home game, so I felt very comfortable. I went against our D-line which I think is one of the best in the league, so it was just another game. I was nervous at the start because of all the hype on the jersey. But after the first play or so, I got comfortable. It’s just football,” he said. 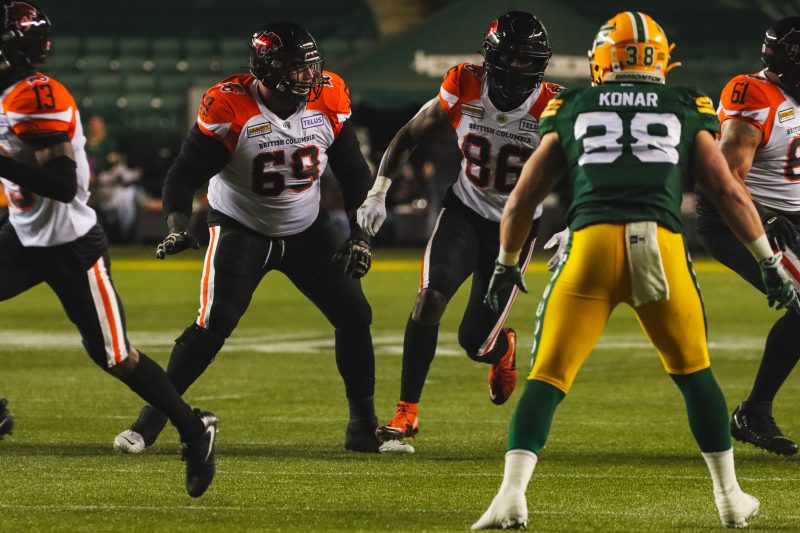 Broxton said the entire offence is playing with a chip on their shoulder this season. He felt that being able to dominate the line of scrimmage in the running game has opened the doors for the offence to be more dimensional.

Seeing his running back James Butler reaching for the stars in 2022 is an accomplishment the O-Line pride themselves in. Additionally, with receivers like Lucky Whitehead and Keon Hatcher inching to 1000 receiving yard season is why Broxton comes into work every day hungry to move the sticks.

“Oh my God. Seeing JB [James Butler] doing all these things and it’s about time for him to shine is just great to see. Being a part of these last two games, it feels good blocking for somebody you know that he’s going to give it his all,” Broxton added.

With Nathan Rourke returning to the lineup this week and set to play in week 21 against the Bombers, the entire organization is beyond delighted to see Rourke back in action. But the O-Line remains steadily focused on their tasks this week.

“We’re happy that he’s back because he’s one of us. The O-Line as a whole don’t care who’s back there, we’re just going to block our ass off and do what we can to help the team,” Broxton said.