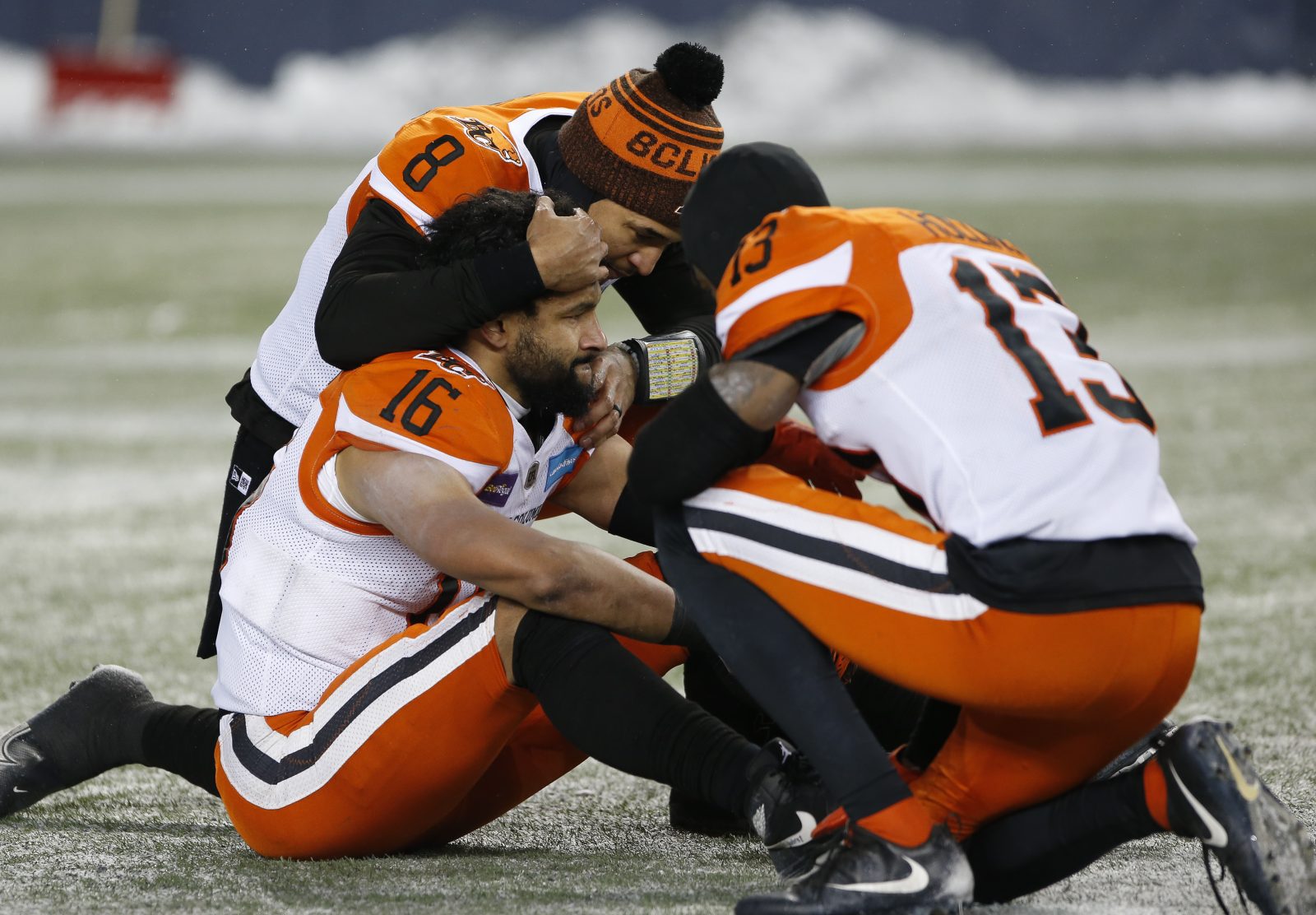 Winnipeg, MB-  The magical ride of 2022 for the BC Lions came to an end against the Winnipeg Blue Bombers. On the strength of running back Brady Oliveira and a couple of timely takeaways, the Bombers punched their ticket to a third straight Grey Cup with a 28-20 win over the Lions in Sunday’s Western Final. Now for some game takes from Matt Baker.

This game was anything but normal. The first half had plenty of ups and downs on its own. On both sides. After Zach Collaros drove the Bombers 74 yards to the end zone on the opening drive, the Lions would get a big break on special teams when Jarnarion Grant fumbled inside his own five-yard line to gift the visitors seven points on a run by Antonio Pipkin.

Then things got even crazier: a Marcus Sayles end zone interception was sandwiched in between a fumble from James Butler and a Nathan Rourke interception to Winston Rose when the Lions were threatening to score. In the wild sequence, Grant also redeemed himself with a 92- yard punt return major which helped lift the defending champs to a 19-8 lead at the break.

Nathan Rourke and the offence had trouble getting into a groove, finishing 20/37 for 300 yards and a touchdown to Alexander Hollins to give them a fighting chance late in the fourth quarter.

“Yeah, we didn’t get off to a good start that we wanted to. I didn’t think it was necessarily anything they were doing that was special,” said the quarterback.

“I thought that we were really kicking ourselves and we had some breaks go our way early, which was great and we would have stayed in it, but it was too late when we got into a rhythm and you can’t do that against a good team like Winnipeg.”

The real backbreaker took place in the third quarter when Pipkin was stopped on a third-and-one gamble which set the Bombers up for a field goal and gave them a 15-point cushion with the crowd getting louder and the temperature getting colder. All in all, the Bombers proved just how much of a championship-caliber squad they still are.” 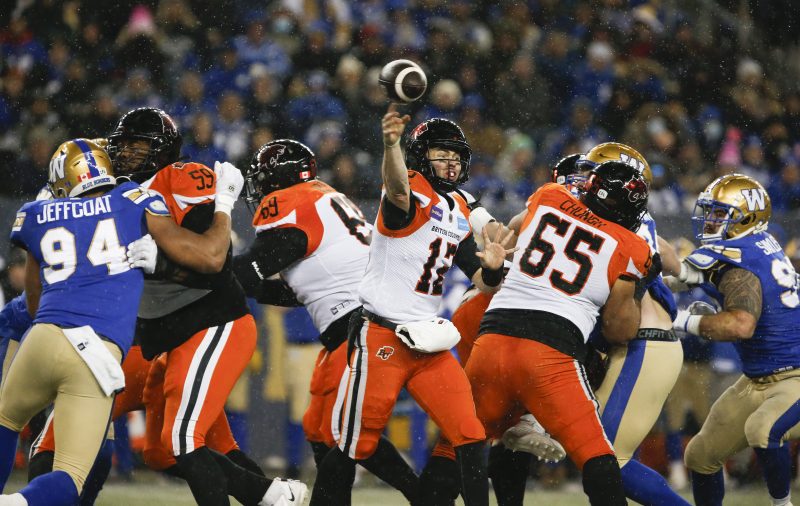 “The difference in this game was there were a lot of big plays that happened,” explained head coach Rick Campbell.

“They’re a really good team, you’ve got to play well with these guys. They made more plays than we did. I give them credit. They won.”

Added veteran defensive back TJ Lee on the difficulty slowing down the Bombers’ running attack led by Oliveira:

“When they were able to elongate some drives, everybody not getting there to wrap him up, more than one person wrapping him up, pad level was a huge deal in some of those cases, but we gave our all and some of those they outs schemed us, out gapped us and he was able to get a few extra yards.” 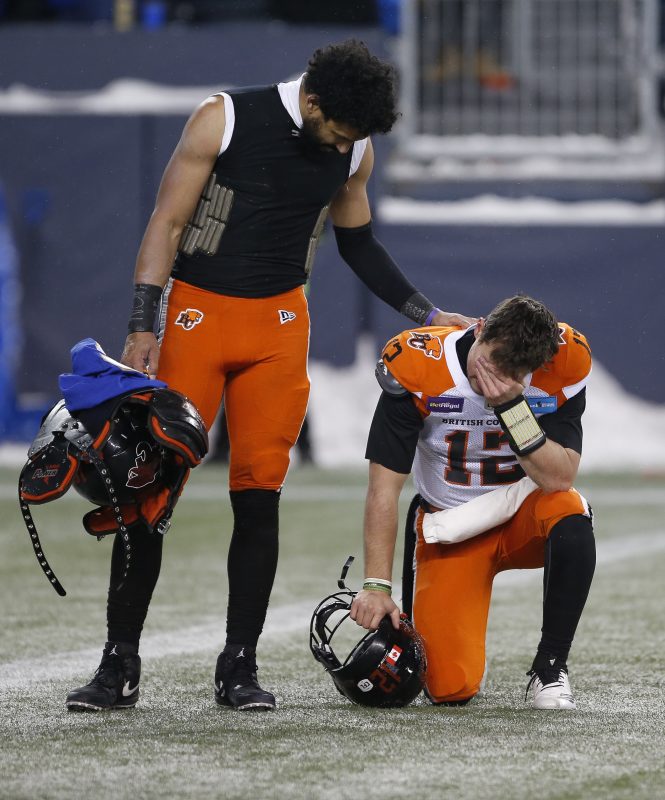 With time will come perspective. This Lions team exceeded the expectations of many outsiders with a 12-6 record and its first home playoff game in six seasons. Campbell made sure that wasn’t lost on them in what was quite a crestfallen locker room initially.

“I’m just really proud of them. What a great group. They really are. If you get to hang around these guys at all, they’re really good people. And so that’s the emotional part for me, it’s not just losing, what I like is just hanging out with them and being around them. The way they battle, they keep fighting all the way until the end and just didn’t get it done.”

Losing these games will never not sting. But now the organization can look to build on it.

130- rushing yards for Oliveira who averaged a whopping 6.5 yards per carry. There was your difference in the game.

28- total rushing yards for the Lions, with Rourke leading the way with 20. James Butler was held to just four yards on six carries after playing through an apparent shoulder injury suffered in the early stages.

34:57- as always, we highlight the time of possession as a real measuring stick. The Bombers owned that category tonight.

4- turnovers were committed by the Lions.

The Lions now head into an offseason of hope while the Bombers will take on Toronto in the 109th Grey Cup at Regina next Sunday. The Argonauts took down Montreal 34-27 in the Eastern Semi-Final on Sunday.