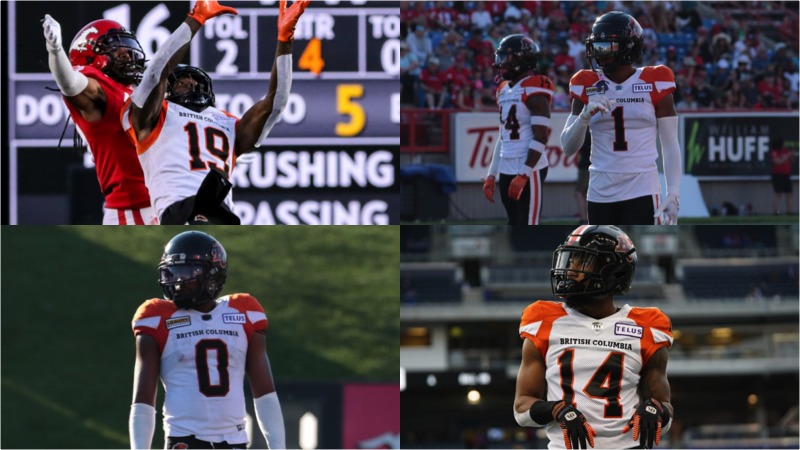 The Canadian Football league announced this morning that four members of the BC Lions have been voted as 2022 CFL All-Stars: WR Dominique Rhymes and DBs Garry Peters, Loucheiz Purifoy and Marcus Sayles. All four players are earning their first-ever league All-Star nod.

The All-Stars were selected by 47 voters made up of members of the Football Reporters of Canada and the league’s head coaches, plus submissions through the All-Star Fan Vote.

Rhymes– with a couple of key injuries at the receiver position in 2022, Rhymes stepped up as the top target for Nathan Rourke and Vernon Adams Jr., hauling in 85 receptions on 122 targets and finishing second in the CFL  with 1,401 yards and 11 touchdown catches, both of those totals also career-highs. Rhymes also recorded three multi-touchdown games in 2022.

Peters– enjoyed one of his finer seasons in orange, leading the team with five interceptions while recording 44 defensive tackles. Peters also suited up in all 18 regular season games, bringing his ironman streak to 68 since he originally signed with the Lions in February 2018.

Purifoy– Aided in part by his famous sidekick Pennywise, Purifoy enjoyed a solid return to the team he originally broke in with back in 2016. Starting 18 games and playing a variety of positions in the secondary, Purifoy tallied three interceptions, one sack and registered 55 defensive tackles.

Sayles– made big strides in year two with the squad, starting all 18 games at halfback and recording four interceptions with one being returned for a touchdown in a victory over Winnipeg on October 15. Sayles also registered 68 defensive tackles.