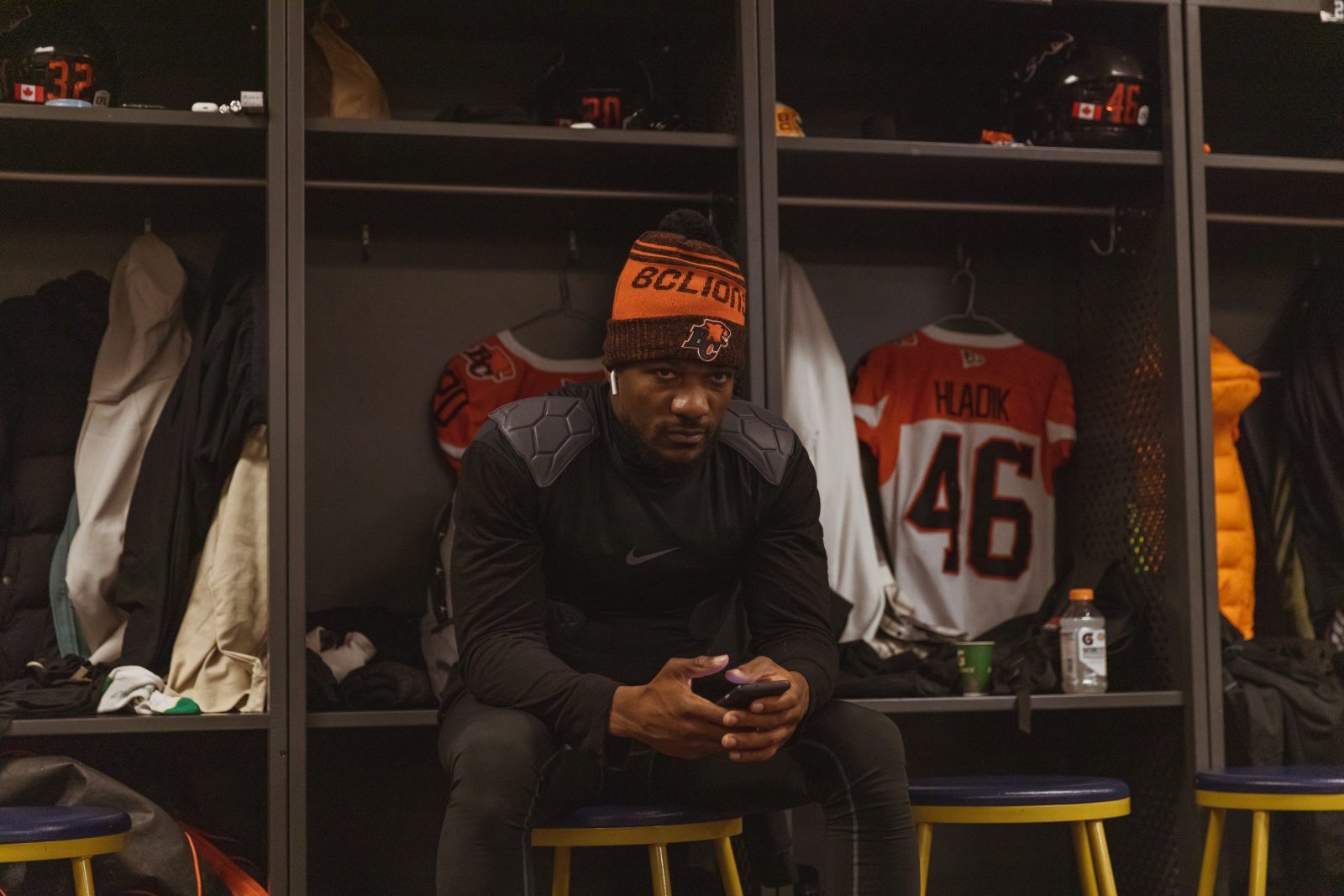 Before Bo Lokombo became a cornerstone for the Lions’ defence, he was only a high school kid who wanted to excel in the sport of football. When he was in the 10th grade, Bo realized his body was starting to develop a little more and by junior year in high school, he was playing on the varsity team. That path led him to Oregon.

“The summer of 2006, I started to go to a lot of Nike camps and scout.com camps at the time. I started to go across the border to participate in these camps that had a bunch of college scouts. I started to excel in those camps to show off my athleticism,” Lokombo recalled.

In 2007, Lokombo went down to Oregon to attend a three-day camp at Oregon State and he put on a clinic that the Beavers offered him a scholarship on the spot. Lokombo was thrilled to receive his first offer but he knew he could catch more schools’ attention.

“I wasn’t getting recruited enough, so we wanted to try to play in the states. I ended up transferring to a high school in Oregon called South Eugene. I did really well that season and all the scholarships started to come. I was making a little more of a name for myself playing against new competition, I think I ended up with 15 scholarships,” he recalled.

Lokombo returned to Abbotsford’s W.J. Mouat Secondary for his senior year. His team played against Sukh Chungh and the Terry Fox Ravens in the 2008 Subway Bowl. Despite enjoying his time playing on both sides of the border, Lokombo said he doesn’t wish to bring up the final score of his last high school football game.

“I don’t like to talk about it because we lost that year,” Lokombo added.  He then praised the 2008 Terry Fox Ravens for an outstanding championship season.

With 15 offers on the table, his biggest motivation at the time was to receive a full scholarship and have his education paid for. Lokombo ended up committed to the Oregon Ducks because it was a no-brainer of staying close to B.C., with the desire of his parents and family to be able to attend his games.

“My parents drove down whenever we had a home game which was special. My mom, my father, and my siblings all came quite consistently. The number two reason was the coaching staff. At the time, it was Chip Kelly. We came to Oregon at the same time so we knew he was going to be here for at least four to five years. My position coach, Don Pellum, was there for a while. We just had like a solid foundation,” Lokombo recalled.

The third reason was being able to wear one of the best uniforms in sports. The Oregon Ducks have the privilege to wear every Nike’s newest uniform and gear.

“The facilities, the uniforms, just something about Oregon was tremendous. Even to this day, a lot of people choose to go to Oregon because it’s just the place you want to be,” Lokombo said.

With the flashiest gear on the field and one of the most exciting teams in college football at the time, the Oregon Ducks had high expectations of themselves.

Lokombo said his first wakeup call was his redshirt year when the Ducks lost to Boise State in their first game of the 2009 season. Despite containing a stacked roster with many high-profile names who went on to play professionally, that season-opener loss was unforgettable for Lokombo.

“We had such high expectations. But the fact that we lost to Boise State, we were caught off guard. LeGarrette Blount punched the Boise State player after the game, I think that was something everybody will never forget. It was such a big deal because we had a new coach and all these high-profile players. I was like, ‘Bo, what did you get yourself into?’” he added.

Little did Lokombo know, the next few seasons would change his life.

During those next few seasons playing for the Ducks, Lokombo was a part of some of the most electrifying teams in college football. Lokombo won a Rose Bowl and Fiesta Bowl  with the Ducks in his junior and senior season seasons, respectively. Suiting up in the BCS National Championship game in 2010 against Cam Newton and Auburn University, where he made one solo tackle, was definitely the highlight of Lokombo’s college career by far.

“That whole season changed my life. During my redshirt freshman year, I was getting pick-sixes, and fumble recoveries, I was making tackles and I was playing against high-profile guys. Making it into the national championship and going 12-0, you were a rock star. Especially at Oregon, because they don’t have a team in the NFL, we were considered celebrities. We were the rock stars,” he recalled.

“I remembered going into some of my classes, I would walk in and everybody would be staring at me. Even the professor would be like, ‘Hey Bo, great game!’ You felt that love, you felt that energy.”

Being great on the field required a price to pay daily. On top of all the rewards from being a part of a great college football culture, Lokombo said playing under Chip Kelly was similar to the military. To be successful, the Ducks had to follow very strict team rules on and off the field.

“We did a lot of intense training. I think one of the things that separated us from everybody was how consistent we were. Coach Kelly has a militant mindset. He wanted everybody to dress the same. The same shoes, shorts, and T-shirts. In practice, you weren’t allowed to take your helmet off even if you were on the sideline. And you could not celebrate. Coach Kelly did not like you celebrating,” Lokombo recalled.

“And just the small things like checking on your classes to see if you were there. They added up for us to be successful.”

Which is one of the reasons why Lokombo was able to come into the BC Lions halfway through the season and make an impact.

The veteran linebacker was drafted by the Lions in 2013 but didn’t join the Lions until September 2014. Years later, Lokombo is still playing his best football and is one of the few Oregon Ducks who are still playing professionally from the 2009 recruiting class.

Although he wished he could have experienced his rookie season in the CFL from the start, so he could bond with players like Bryan Burnham and T.J. Lee even more.

“Those guys came in around the same time as me and they were already on the team. Earlier in the year, they did training camp and all. I joined late. But I felt I was ready for the pro,” Lokombo added.

Without leaping over to the states to earn multiple division 1 offers, Lokombo said he would never meet all the players at Oregon who he still calls friends to this day.

“I got a chance to connect with those guys and be friends with who I never thought I would. Like Kiko Alonso, when I was playing with the Ravens, I was able to play against Kiko when he was playing for the Miami Dolphins. We took a picture and I still have that,’ Lokombo said.

“I would encourage all the kids to work hard. Don’t give up whenever things don’t work out because you never know who’s watching.” 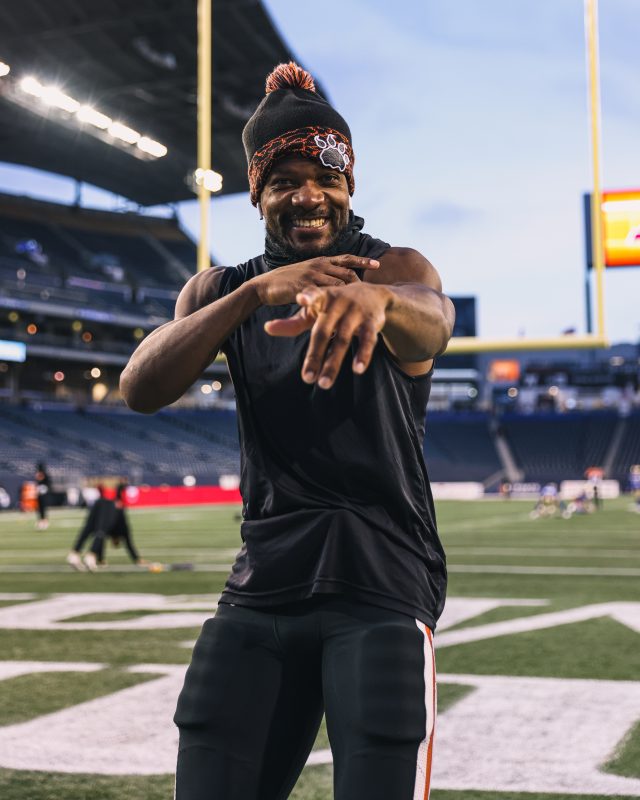