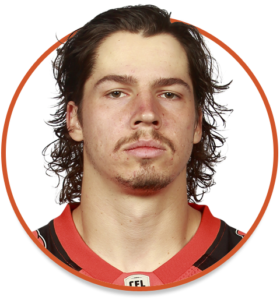 Highlights:
2019: Adam was a training camp addition to the Lions’ roster following his release by the Edmonton Eskimos. His 17 regular season appearances were a career-high for the four-year vet as were his eight special teams tackles on the year. The BC native also rung up six tackles on defence.

2015-2018: (Edm): Entering the league as Edmonton’s third-round selection (25th overall) in the 2015 CFL Draft, Adam went on to appear in 34 games over four seasons with the Green and Gold tallying 94 tackles, three interceptions and a pair of sacks. He was waived by Edmonton just prior to training camp in May 2019 and signed by the Lions shortly after.

College:
2011–2014: Adam enjoyed a productive career with the Calgary Dinos including his final collegiate campaign in 2014 when he tallied 42 solo stops and an interception before being drafted by the Edmonton Eskimos.