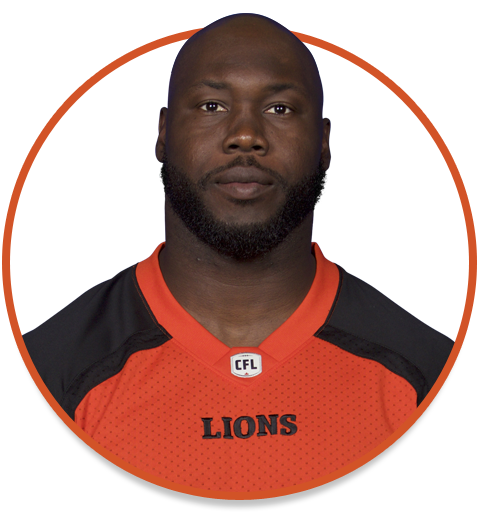 Alex returned to the Lions as a free agent in October 2021. Originally signed with the team in May 2014 before a second stint in September 2017.

2019: Recorded nine defensive tackles and two sacks in seven games with Edmonton and would go on to play in both the Eastern Semi-Final win at Montreal and Eastern Final loss at Hamilton.

2018: Signed with Edmonton as a free agent in February and would suit up in all 18 games. Recorded 39 tackles with eight sacks and one forced fumble.

2017: Signed with Indianapolis Colts in January prior to being waived in May. Bazzie then signed with Carolina Panthers before ultimately attending training camp with Arizona Cardinals. Returned to the Lions in September and would record 12 defensive tackles and three sacks in six games.

2016: Enjoyed his best CFL season to date, suiting up in all 18 regular season games. Had 31 tackles with a career-high and team-l;eading 11 sacks and one forced fumble. Named West Division All-Star.

2015: Played 15 contests in his second year in orange and black while recording 24 tackles and eight sacks. Had three tackles in West Semi-Final loss at Calgary.

2014: Signed with Cleveland Browns as an undrafted free agent May 11…Signed with B.C. May 20. Played 17 games. Recorded 36 tackles with 10 sacks and a forced fumble. His first CFL sack came against Montreal on July 19. Playoffs: Had two tackles and a sack in East Semi-Final loss at Montreal.

College:
2009-2013: Suited up in 45 games at Marshall University. After redshirting as a freshman, Bazzie finished with 175 tackles, 23 tackles for loss and four sacks. Played in C-USA championship game as a senior. Began his college career at Fork Union Military Academy in 2008.

Personal: Attended Northwood High School. Played linebacker and running back. Was born in Liberia and moved to the U.S. when he was five.