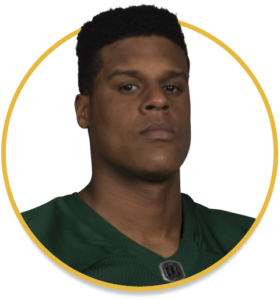 Acquired:
Andrew was signed as a free agent by the Lions in July 2019.

Highlights:
2018–2019 (Edm): Andrew was originally signed by the Edmonton Eskimos in 2018 and spent the year with the Esks without seeing game action. He attended training camp with Edmonton again in 2019 before being waived as part of the club’s final roster cut-down. He signed with the Lions in July and re-signed for the 2020 season in November.

College:
2011–2015: Peterson began his collegiate career at the University of Arkansas in 2011 where he redshirt his freshman season before transferring to Kilgore College for the 2013 and 2014 seasons. In 2013, he caught six passes for 24 yards as a tight end and also notched a pair of touchdowns. He moved into a full-time offensive line spot for the 2014 campaign and ultimately transferred to Southern Mississippi for his senior season in 2015.