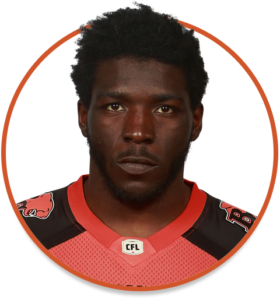 Acquired:
Darius was signed as a free agent by the Lions in March 2019. He was originally signed by the Lions in 2016 before signing with the Edmonton Eskimos in August 2017.

Highlights:
2019: Following a two-year stint in Edmonton, Darius was re-signed by the Lions in February 2019. He began the year on the club’s starting defence, but a season-ending knee injury suffered in Toronto in early July limited him to four appearances and two defensive tackles on the year.

2016–2018: Darius joined the Lions in 2016 and appeared in 11 games that season recording four defensive tackles along with another four on special teams. He was waived by the club prior to training camp in 2017, but went on to sign with Edmonton that August. He dressed for one game in 2017 and re-signed with Edmonton for the 2018 season appearing in five games tallying another four tackles along with a pair of sacks.

College:
2011–2014: Darius attended Colorado State-Pueblo and played in 43 games recording 92 solo stops 45 of which were for a loss as well as 29 sacks. His 35 tackles and 13 sacks in 2014 earned him the Cliff Harris Award, presented annually to the top defensive player among all NCAA Division II, III and NAIA schools.