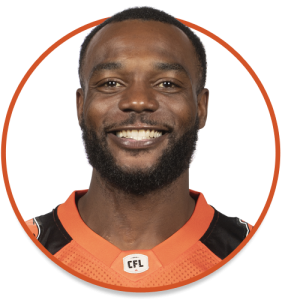 Acquired: Delvin was signed on February 8th during the opening day of 2022 free agency.

2019: Named East Division All-Star after registering 26 tackles and an interception. Suited up in his third Grey Cup as the Ticats would fall to Winnipeg in the 106th version of the championship game.

2017: Breaux missed most of the 2017 season due to a leg contusion that had delayed healing progress. He was placed on the Injured Reserve on Sept. 5, 2017

2015: Breaux was released by Hamilton so he could sign with New Orleans on January 24, 2015. He recorded his first interception in a 39-17 loss to Philadelphia. He received the Ed Block Courage Award for the 2015 season. He was voted the teams’ defensive MVP by fan vote on the Saints’ website. He played 16 games and had three picks, and 45 tackles, 37 of which were solo tackles.

2014: Earned both CFL and East Division All-Star nod for the first time after recording 33 defensive tackles, three forced fumbles, one interception and a defensive touchdown in 16 games. Helped Hamilton reach the Grey Cup for a second straight season, recording an interception in the loss to Calgary at BC Place.

2013: Appeared in nine games in his first CFL season with the Tiger-Cats, recording 27 defensive tackles and a sack. Suited up in the 103rd Grey Cup against Saskatchewan.

2008: He received a scholarship to play for the LSU Tigers but never took a snap because he had sustained a cervical vertebrae fracture.