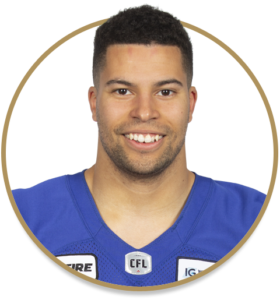 Acquired:
Derek signed as a free agent with the Lions on February 11th, 2020.

2018: Jones had his consecutive-games played streak come to a halt at 75 after suffering a season-ending leg injury in a game against the Hamilton Tiger-Cats on June 29th. One of the best special-teams players on the club, Jones had three special-teams tackles and a fumble recovery.

2017: Dressed for all 18 games for the fourth consecutive season, a streak of 72 consecutive, and made his first start in the Banjo Bowl against Saskatchewan. Finished the year with eight tackles on defence, 11 tackles on special teams and added another blocked punt bringing his career total to five.

2016: Suited up in all 18 games for a third consecutive season and recorded four defensive tackles and seven more on special teams while blocking a pair of punts.

2015: Dressed for all 18 games and recorded a career-high 15 special teams tackles.

2014: Appeared in all 18 games during his rookie season Dressed for all 18 games and recorded six defensive tackles and six stops on special teams.

Personal:
His father, Ed Jones, was a defensive back who played his final season with the Lions in 1984 after helping with Edmonton win five Grey Cups during their dynasty between 1978-82.