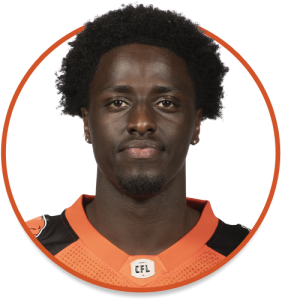 Acquired:
Emmanuel was signed as a free agent by the Lions in February 2022.

2022: Rugamba was a standout in training camp and kept his starting job after debuting at the SAM linebacker spot on August 13 at Calgary. He would earn the team nomination for CFL Most Outstanding Rookie after recording 43 total tackles (38 defence, five special teams), one interception and one sack in 11 contests. Recorded three defensive tackles in two playoff games.

2021: Emmanuel signed with the Cleveland Browns as a non-drafted free agent, becoming the first Rwandan to sign with an NFL team, and would attend training camp with the squad.

2019-2020: Transferred to Miami University (Ohio) for his final two seasons of eligibility. After missing 2018 due to transfer rules, Manny would record 96 total tackles (65 total, 31 assisted), 11 pass knockdowns a pair of interceptions and a forced fumble. Named Defensive MVP of the 2019 MAC Championship with 11 defensive tackles as the RedHawks took down Central Michigan. Earned Third-Team All-MAC honours in both seasons with the program.

2016-2017: Manny began his college career at Iowa where he suited up in 22 games over two seasons while recording 55 total tackles, two interceptions a pair of fumble recoveries and a forced fumble.