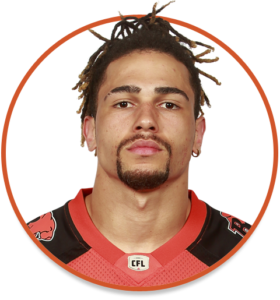 Acquired:
The BC Lions selected Jamel in the eighth round (69th overall) in the 2019 CFL Draft. He signed a contract extension with the team in January 2021.

Highlights:
2019: A picture of perseverance and hard work, Jamel was the club’s eighth-round selection in the CFL Draft and earned a practice roster spot with the Lions coming out of training camp. His determined efforts were rewarded with a promotion to the active roster in September as the local product made his pro debut in Ottawa in September. Seeing action primarily on special teams the dynamic back enjoyed a memorable first pro carry rumbling 36 yards late in the fourth quarter and followed it up with a 23-yard sprint. He finished the year seeing action in seven games recording 11 carries for 86 yards while adding another 10 yards through the air on three receptions along with 144 yards on six kickoff returns.

College/Junior:
Jamel began his post-secondary career at the University of Manitoba in 2015 where he quickly established himself as an offensive force and earned Canada-West honours on both offence and special teams. His 691 yards and two touchdowns on 82 carries also propelled him to Canada-West Rookie of the Year honours. He returned home to BC play a season with the Westshore Rebels of the BFFC where he piled-up 1,604 rushing yards and 15 majors on 187 carries through 10 games.

He returned to the Bisons’ program for two more years and 15 games earning a pair of Canada-West first team honours on offence and special teams with 1,287 rushing yards and five majors along with another 731 punt and kickoff return yards.