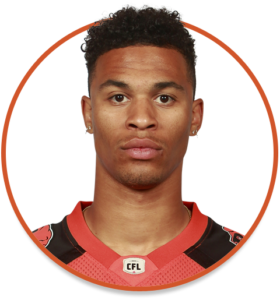 Acquired:
Jesse was signed by the Lions as a free agent in January of 2020.

History:
2019: Jesse attended training camp with the Lions after originally signing as a non-drafted free agent in May. After his release, he joined the BCFC’s Langley Rams where he appeared in eight regular season games and caught 21 passes for 383 yards and a touchdown before helping them reach the Canadian Bowl against Saskatoon.

College:
2015–18: Jesse enjoyed a productive four-year stay at Manitoba hauling in 111 passes for 1,487 yards and nine touchdowns for the Bisons. He was also a threat out of the backfield rushing 47 times for 265 yards and a pair of majors.