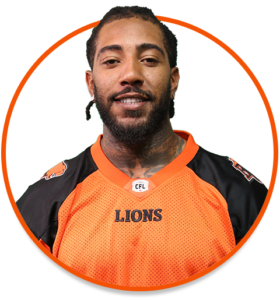 Acquired:
Jonathan was signed as a free agent by the Lions and placed on the practice roster on August 19, 2019.

Highlights:
2019: Jonathan was signed as a free agent by the Lions in mid-August following his release by Ottawa. He made his debut with the club on August 24 versus Hamilton and appeared in eight games for the Leos recording 14 defensive stops, four sacks and a forced fumble. Jonathan also had a three-game streak notching three tackles and a sack per game from September 28 to October 12.

2017–2019 (Ott): Jonathon was signed as a free agent by Ottawa in the early part of the 2017 season following his release by Saskatchewan in July. He went on to appear in nine games for the RedBlacks that season and 23 overall into the 2019 season. Jonathan also made his first trip to the Grey Cup as a member of the RedBlacks in 2018. The versatile defender totaled 22 defensive stops, four sacks and an interception during his time in Ottawa.

2016 (Ssk): Jonathan made his CFL debut as a member of the Saskatchewan Roughriders where he signed as a free agent prior to the 2016 season. Appearing in all 18 games that year, he tallied 27 tackles with six more coming on special teams along with a pair of quarterback sacks.

2014–2015 (Indianapolis): Jonathon was a fifth-round selection (164th overall) of the Indianapolis Colts in the 2014 NFL Draft. he went on to appear in 30 regular season games for the Colts over two season and notched 31 solo stops and four forced fumbles

College:
2011–2013: Jonathan spent three seasons at Ball State and started all 22 games in which he dressed tallying 65 solo tackles and 13 quarterback sacks. His consistent production earned him a  2013 All-Mid Conference First team selection as a senior. Prior to his time at Ball State, the Ohio native spent two years at Ohio State appearing in 19 games collecting nine defensive tackles.