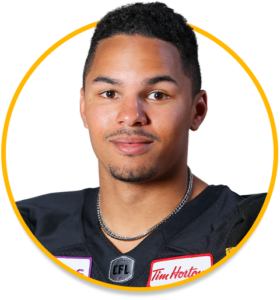 Acquired:
Marcus was signed as a free agent by the Lions on September 2. 2021.

2021: Signed a practice roster agreement with the Lions in early September and went on to suit up in one contest against the Winnipeg Blue Bombers on October 1st where he returned two punts for 13 yards.

2019: Marcus remained on Hamilton’s practice roster for the 2019 season.

2018: Selected by the Hamilton Tiger-Cats in round four (31st overall) of the 2018 CFL Draft and would return to UBC for the remainder of the year while recovering from his knee injury.

College:
2014-2017: Played four seasons at the University of British Columbia and recorded over 3,000 yards from scrimmage in his first two years while helping the T-Birds win a Vanier Cup title in 2015. Played a total of 30 games during his time with the T-Birds.