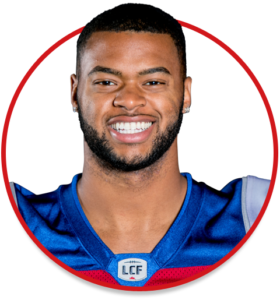 Highlights:
2019: Ryan suited up in all 18 games with the Alouettes and recorded 12 defensive tackles, three sacks and his first career interception. He would go on to record one defensive stop in Montreal’s Eastern Semi-Final loss to Edmonton.

2018: Made his CFL debut with the Montreal Alouettes and recorded 17 defensive tackles, five sacks and two forced fumbles in 13 games.

2017: Signed as a nondrafted free agent with the Cincinnati Bengals and recorded five combined tackles in four pre-season games before being released as part of the team’s final roster cutdowns.

College:
2012-15: Ryan suited up at Mississippi State and recorded 91 defensive tackles and seven sacks while also being named the SEC Defensive Lineman of the Week after a 2015 victory over Troy University