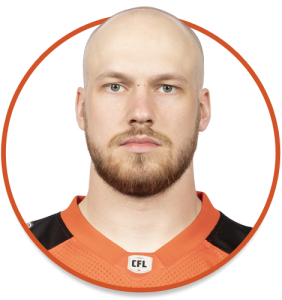 Varga was selected in round three (29th overall) of the 2022 CFL Draft.

2022: Ryder enjoyed his finest season as a Ram in 2022, recording 54 combined tackles (35 solo, 19 assisted), seven tackles for a loss, two sacks and in interception in nine games.

2021: Although the Regina Rams struggled to a 1-5 record in 2021, Ryder Varga had a strong showing through the season. The linebacker started in all 6 games, leading the team with 35 solo and 48 total tackles to go along with one sack after not playing in 2020 due to pandemic-related shutdowns.

Along with earning a 2021 Canada West All-Star nod, the 2021 season saw Varga earn his third consecutive Academic All-Canadian honours. The Rams struggled in the 2021 season, finishing with a 1-5 record.

2019: Playing in all 8 games for the Regina Rams, Varga led the Rams in total tackles, recording 34 solo and 44 total tackles. The season saw Varga earn his second consecutive Academic All-Canadian honours. He recorded a season-high 9 solo and 10 total tackles to go along with one sack in a September 28th, 2019 away game at Manitoba.

2018: Varga played in all 8 games in his first full season with Regina. He recorded his first career sack in a September 29th, 2018 away game in Manitoba, he later finished the season with 9 solo and 10 total tackles as the team finished with a 4-4 record. Varga earned Academic All-Canadian honours for the first time in 2018-19.

2017: In his redshirt season for Regina, Ryder Varga played in one game. Varga forced a fumble in the second quarter to help the team to a 58-55 double overtime win over Alberta.