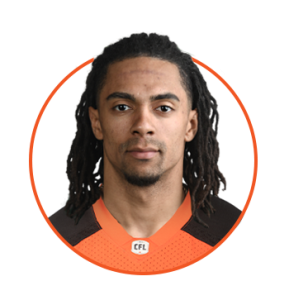 Shai was signed as a free agent by the Lions in June 2022.

2022: Shai suited up in the Elks’ first two pre-season contests before being released by the club on June 21.

2021: Year two was the most productive campaign with the Elks as Shai recorded 27 receptions for 369 yards and four touchdowns.

2019: Shai was selected in round five (40th overall) by Edmonton in the 2019 CFL Draft and would appear in five games as a rookie with the green and gold.

2016-2018: Suited up in 23 games over three seasons at the University of Manitoba and hauled in 76 catches for 1,164 yards and ten touchdowns while also chipping in on special teams with 675 return yards.

2015: Shai was a member of the Okanagan Sun and helped the squad to an undefeated regular season on route to winning a BCFC title.

off the field, Ross has demonstrated his superior athletic skills by doing barbell backflips and is also an elite cookie dunker.