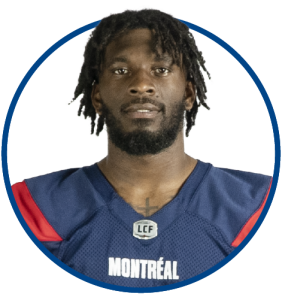 Tavien was signed by the Lions as a free agent in December 2022.

2022: Tavien moved north to the Montreal Alouettes and recorded 62 yards on 11 carries in two regular season games, his longest run going for 15 yards.

2021: Signed a reserve/futures deal with the Arizona Cardinals and was re-signed to the practice roster in October after being waived at the end of training camp. Added to the active roster in November after starter Chase Edmonds went down with an injury.

2020: Signed by the Detroit Lions practice squad on October 7.

2020: Signed as a non-drafted free agent by the Jacksonville Jaguars on April 27.

2019: Transferred to South Carolina for his senior season and was the Gamecock’s top rusher with 572 yards and five touchdowns on 124 total carries. He added 17 receptions for 87 yards. Named All-SEC Honourable Mention by Pro Football Focus and was selected to play in the East-West Shrine Bowl.