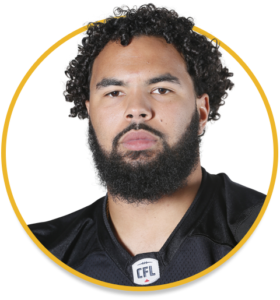 Acquired:
Terrell was signed as a free agent by the Lions in February 2019.

Highlights:
2016-2018 (Ham): The Victoria native and UBC grad began his CFL playing days as a member of the Hamilton Tiger-Cats after being selected in the third round (21st overall) during the 2016 CFL Draft. The hard-hitting linebacker spent three seasons in Steel Town appearing in 51 regular season games and recording 11 tackles with 20 more on special teams including a career-high of 10 in 2018 along with a pair of sacks.

College:
College: Following a red-shirt season in 2012 and a single appearance in 2013, Terrell transferred from Arizona State to UBC and played 16 regular season games over two seasons (2014-15) at both running back and linebacker. He recorded 36 rushes for 186 yards and one touchdown along with eight receptions for 41 yards in 2014 before converting to linebacker in 2015. On the defensive side of the ball he piled-up 56 tackles (third among all CIS players) with four sacks and seven tackles for a loss. Terell wrapped his time with the T-Birds with a win in the Hardy Cup (Canada West championship), the Uteck Bowl and the Vanier Cup in 2015.