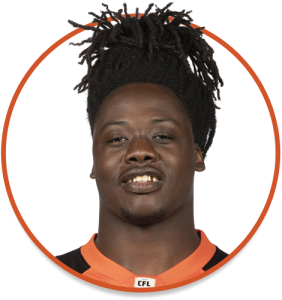 Acquired:
Tim was signed as a free agent by the Lions in December 2020.

2021: Tim emerged as one of the squad’s most productive newcomers on defence. Along with recording a team-high five sacks, the explosive Bonner recorded 22 defensive tackles, two tackles for a loss and one forced fumble in 13 contests.

2020: Tim attended workouts with both the Miami Dolphins and Seattle Seahawks.

College:
2017-19: transferred to Florida Atlantic and recorded 58 total tackles, including 21.5 for a loss, eight sacks, two forced fumbles and two pass knockdowns in 38 games.
2016: Tim moved on to East Mississippi Community College and was featured prominently on the hit Netflix series Last Chance U. He registered 37 total tackles and 5.5 sacks in 12 games.
2015: redshirted at the University of Louisville.